It’s August in Europe, so what better way to kick back than with a data intensive analysis of seed investment rounds on the continent? Let’s take a look at how the first half of this year has shaped up and assess any threats and opportunities for founders.

Volume on a dollar basis has increased, though the absolute number of deals has decreased.

Above: Data source: Crunchbase and dealroom.co

Advice to founders: There’s more capital than ever at the early stages in Europe. Early stage investment volume has been trending upwards since 2012, though it seems to be stabilizing. With a healthy levels of capital being deployed at seed stage, it’s ever more important to choose partners that will give your startup the best chance to grow. Solve for growth of your company, not vanity fund raisings.

Rounds are getting bigger and might have reached a cyclical high. 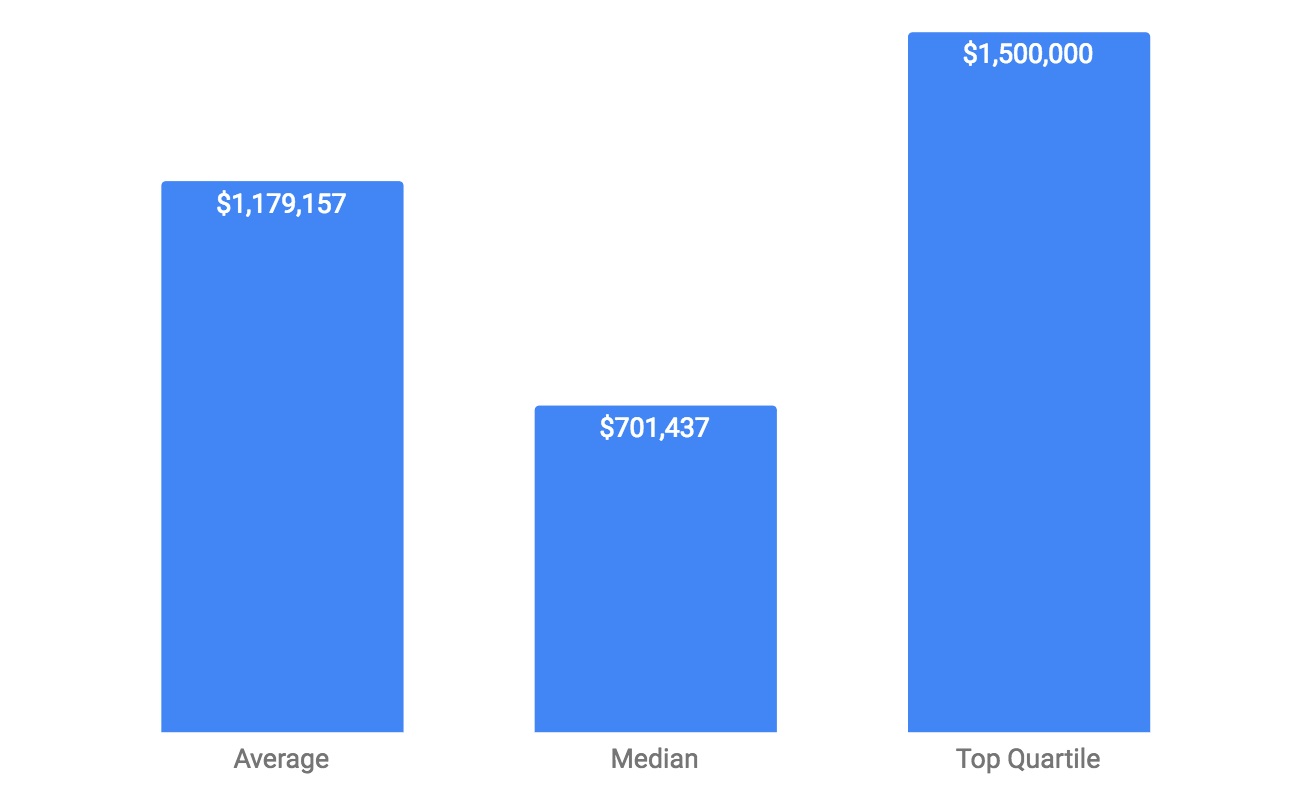 Interestingly, this is a 33 percent increase in average deal size versus H1 2017, which saw an average round size $890k.

So evidently rounds have gotten larger. But how does deal size compare with historicals? 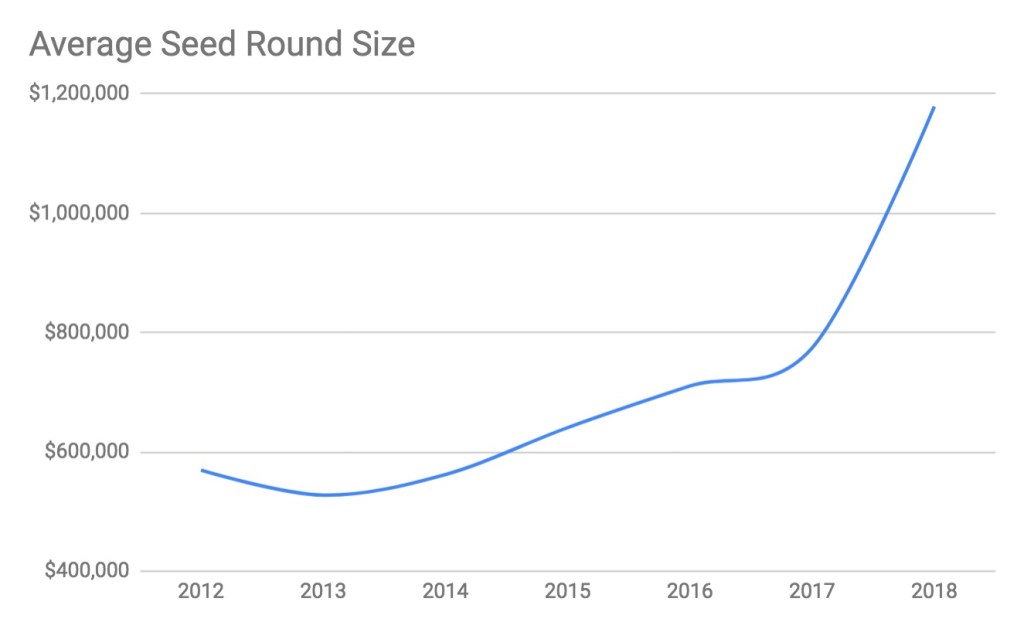 Advice to founders: More capital is going into fewer deals, so the bar for raising seed funds is getting higher. With increasing round sizes, generally come increased valuations. Whilst these heightened valuations might seem useful for purposes of controlling dilution, finding yourself too dilution sensitive at the seed stage may further hinder growth down the line. Do not forget that market terms are already fairly founder friendly. Semi-sensible valuations backed by aligned investors should be your key focus. Taking a lower valuation from a better investor seems counterintuitive but may well be the difference between success and failure. Your startup’s growth can be propelled by value-additive introductions to talent, customers, etc. A higher valuation will not hire your next engineer or convert your next client. 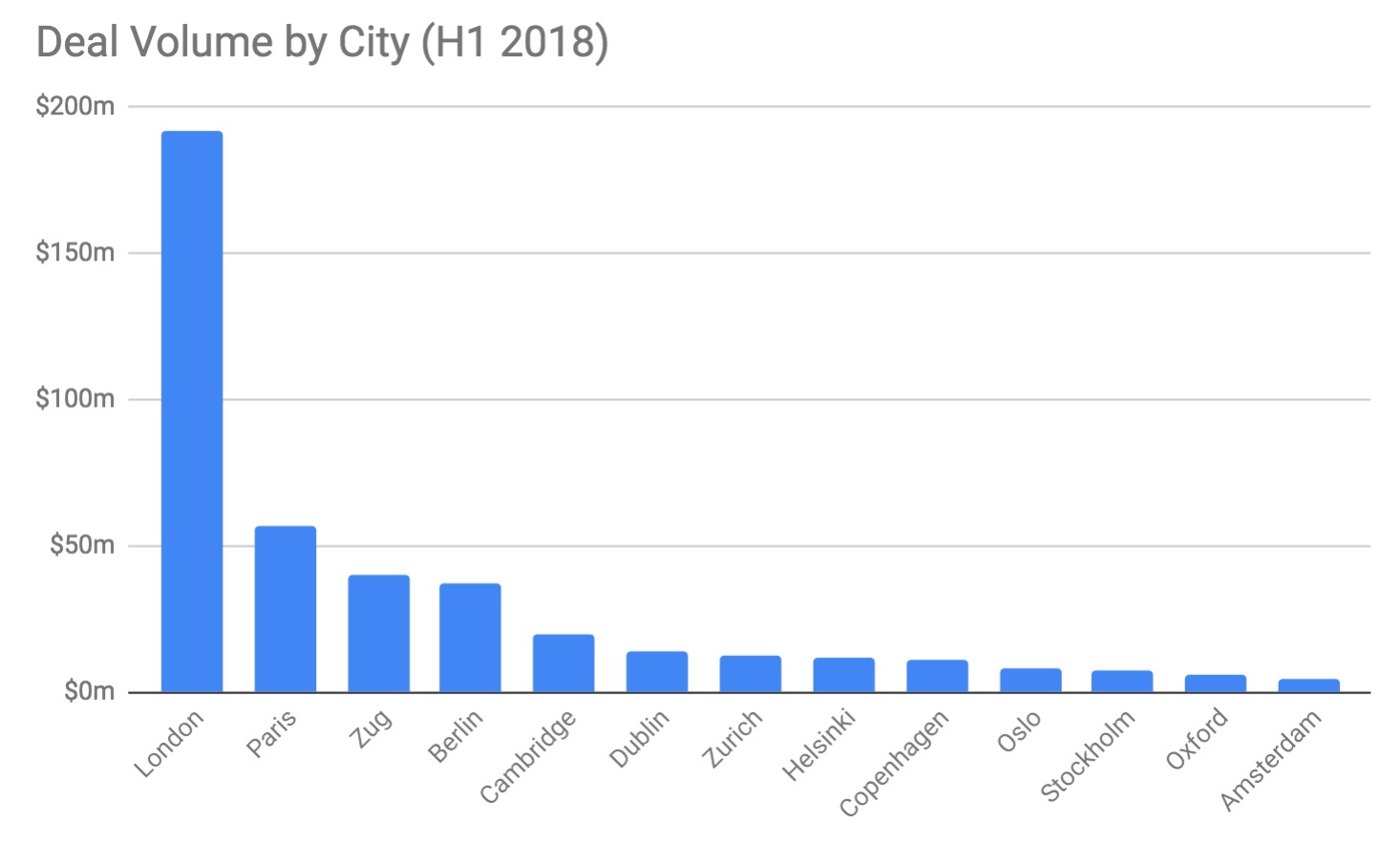 Forty-nine percent of seed funding (on a dollar basis) was allocated to startups in the top four cities, leaving a long tail of European cities picking up the second half. 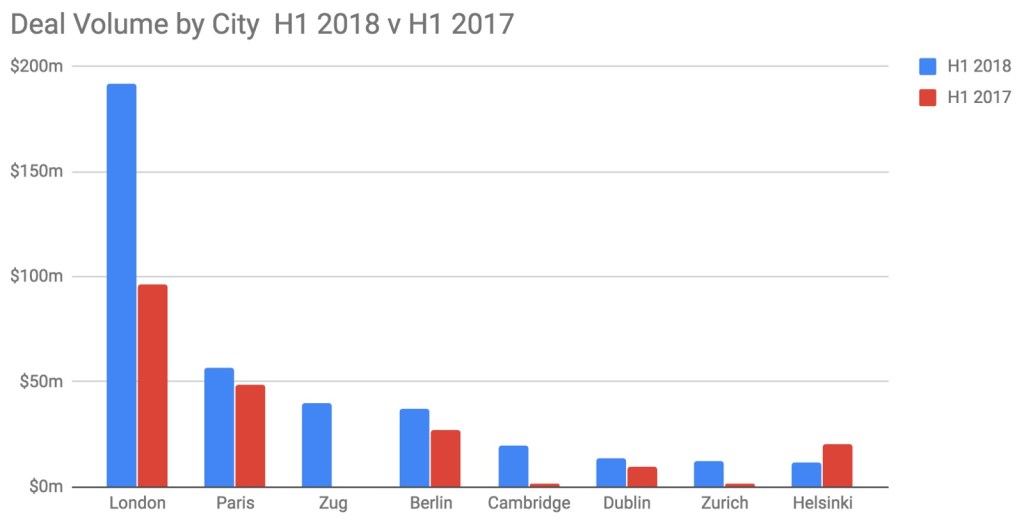 Advice to founders: London is still the best place in Europe to build a venture-backed startup. The depth of London’s ecosystem (and nearby Cambridge-Oxford) continues to outpace other European cities even in light of the imminent Brexit. The city has the highest concentration of angel investors, VCs, accelerators, and ultimately capital. It is also home to 13 of Europe’s 34 unicorns. This provides the most fertile environment for talent, funding, and mentoring. The immediate threat to London’s dominance is a post-Brexit world where hiring foreign talent is constrained and UK companies face difficulties trading with foreign counterparts. It’s worth bearing in mind, though, that most European investors have coverage across the continent  —  great companies can be started anywhere, although you may hit a cap on hiring talent faster in some areas.

4. Age of startup at seed funding

Currently, the average age of startups at the time of seed funding is two years and three months. 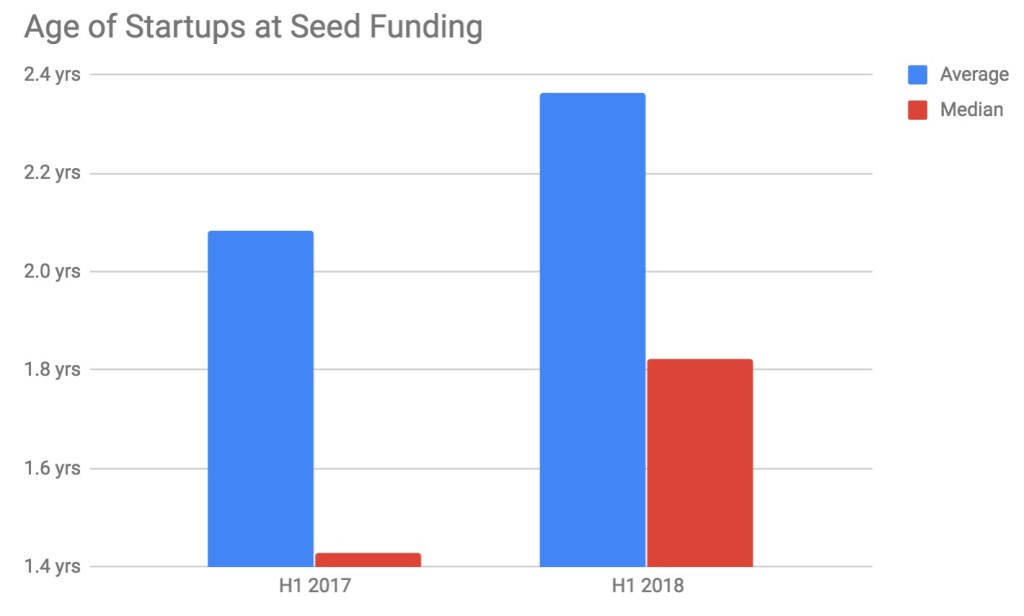 Compared to H1 2017, the average and median age of startups at the time of seed funding has increased.

Let’s now look at whether startup maturity has any bearing on the amount of capital raised: 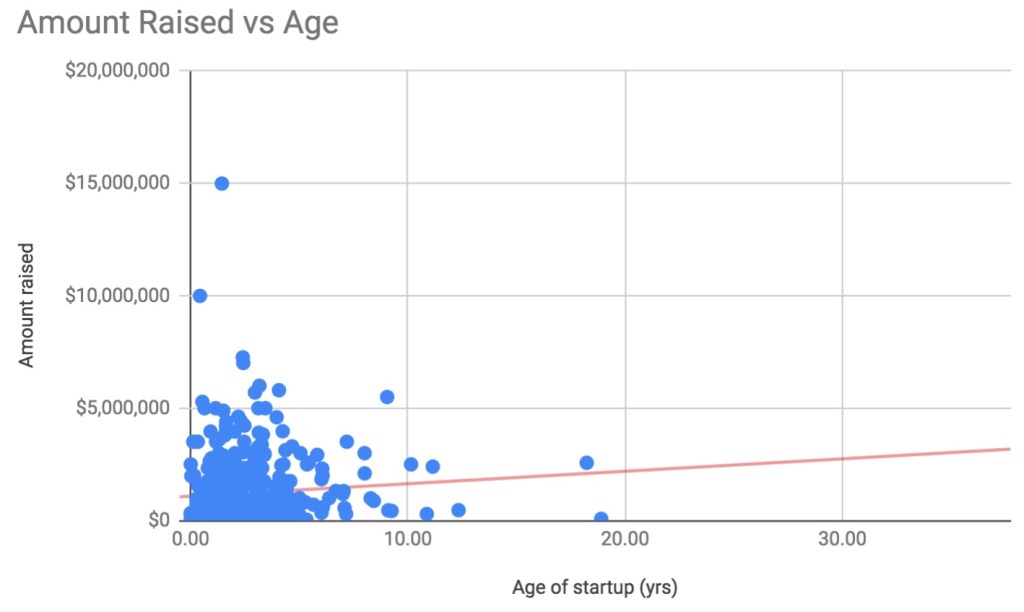 The trendline is softly sloped upwards, which indicates a small relationship between increased age and capital raised at seed. Still, unless bootstrapped companies keep up with venture-scale growth targets, it’s likely that some investors might see a prolonged timeline to raising as a negative signal if ailments are present (faltering traction, inability to ship, strategic incoherence, etc).

Advice to founders: Timing of funding rounds should be based on a combination of when your company requires capital and when your metrics show you can translate that capital into further growth. Financings should be viewed as company inflection points to further accelerate growth; they are not the end game. Companies raising seed rounds are no longer a founding team and a deck. With the lowering of barriers to company creation (AWS, freelancers, atomization of the startup stack, etc.), founders can now get further with less. Make sure capital is your primary growth constraint before raising your seed round.

Series A funding continues to grow, with investor expectations of startup traction growing too.

Whilst there’s clearly been a steady increase in seed fundings, one of the expected questions for any seed-stage entrepreneur is: How do we get to Series A?

Looking at startup KPIs and revenue expectations might be overbearing for this analysis, so let’s look at the pace of Series A funding in the last 18 months as a proxy: 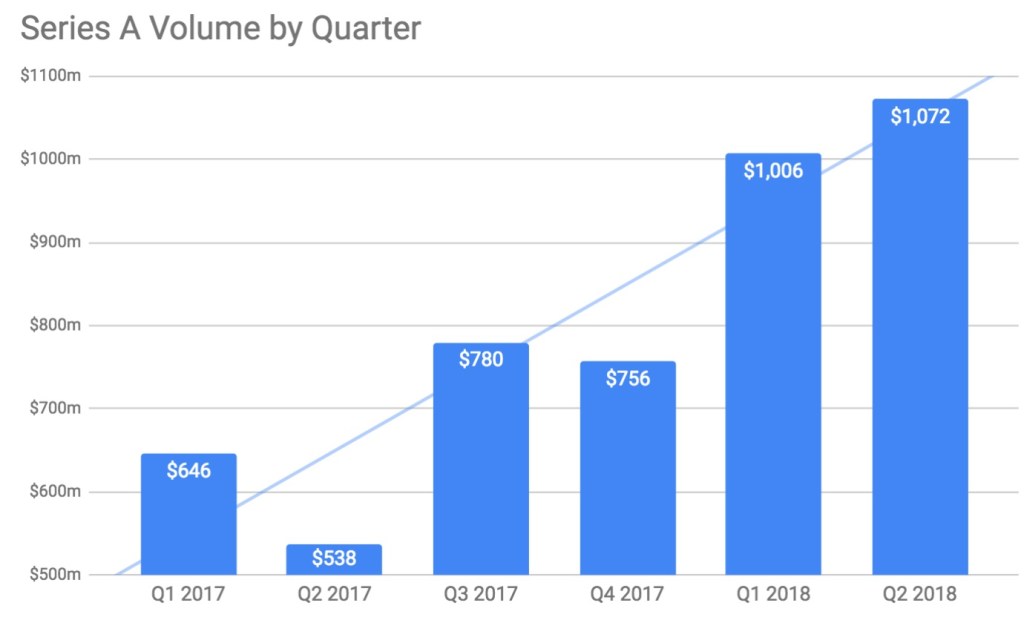 European Series A volume has been increasing markedly  —  without going into an analysis of ‘A’ rounds, we can deduce that the environment for raising is healthly at least.

Let’s now look at the average amount of capital startups have raised prior to their Series A round. I would take this chart with a pinch of salt. All startups are unique and have their own capital requirements (hardware = high, software = low) to get to their next inflection point. The below is informational, not a goal or requirement. 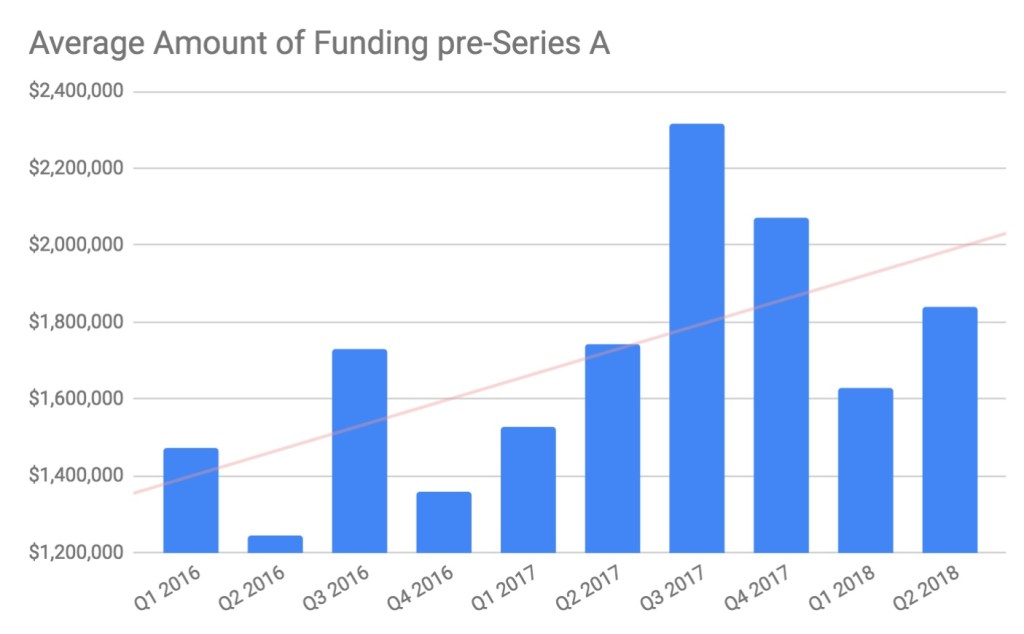 Interestingly, the above chart, when contrasted with seed round sizes, shows there is not an insignificant amount of capital being raised outside of the “traditional” seed round  —  this will be from angel, pre-seed, bridge, and seed extensions.

How long has it taken them to get there? Looking at a dataset of the last 2.5 years, it’s taken startups an average of four years to get to Series A. 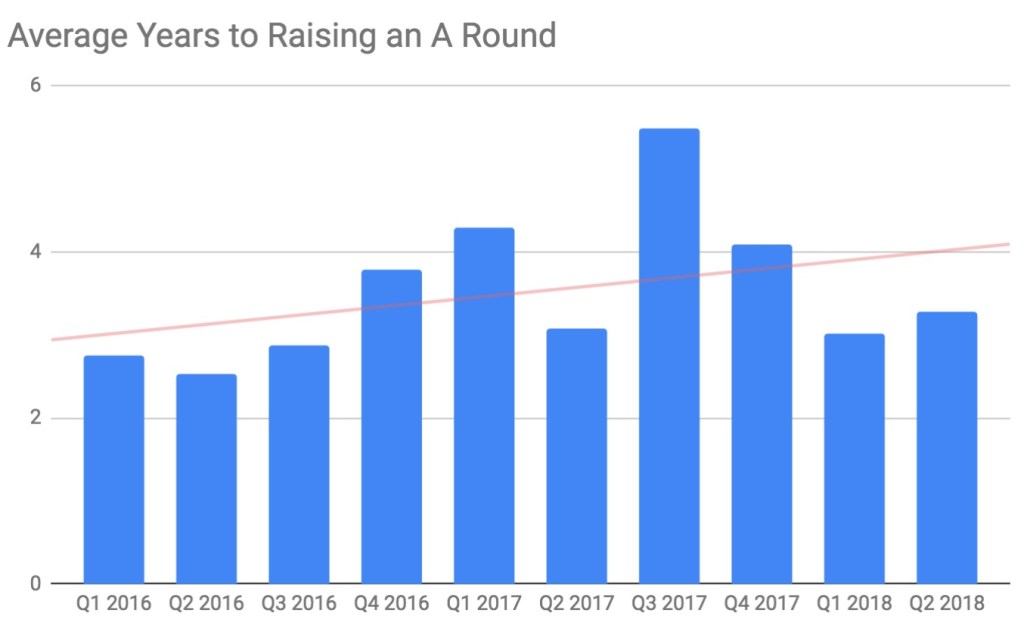 Advice to founders: The trend line is clear. There’s never been a better time to start a company and raise early stage venture funding in Europe, although the time it takes to get to seed and Series A is increasing. Investor expectations of both seed and Series A startups have increased. Startups are also likely to have more runway to move from product-go-to-market-fit to product-market-fit to growth. A thoughtful and pragmatic approach to understanding the required KPIs to get to Series A is important. Startups through the seed phase will undoubtedly go through a multitude of hiccups and roadmap shifts in order to gather sufficient data points to get to product-market-fit. Positive directional progress (and cash) will keep your startup going, and the ability to work with investors who can provide a better understanding of the market requirements for an A round will give you an advantage versus peers.

We’ve been hearing the repetitive rhetoric that ‘European tech is growing.’ And we can see now that the underlying data fundamentally backs up this claim.

Sam Cash is VP at betaworks.