It’s the end of eggs as we know it. Or at least it could be.

Hampton Creek has the audacious and just-a-little-bit crazy goal of replacing factory-farmed eggs with a plant-based alternative. The company is soaking up $23 million in new funding led by Horizon Ventures, the investment fund of billionaire Li Ka-shing, Asia’s richest man and a vegan to boot.

“A vast majority of eggs come from factory farms where the conditions are appalling,” founder and CEO Josh Tetrick said in an interview at Hampton Creek’s office/R&D lab. “We aren’t trying to replace eggs that come from local farmers — in fact, we support that. We just believe that there is a better way, and one that is not only more cruelty-free and better for the environment but also cheaper than eggs you find at the supermarket. That’s the only way this will work.” 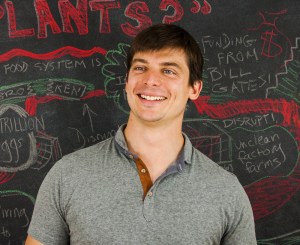 Hens lay 1.8 trillion eggs for consumption every year. As Tetrick said, 99 percent of those hens are in factory farms, where they dwell in cramped, unsanitary quarters and receive large doses of antibiotics. This has caused a number of alarming disease outbreaks and widespread product recalls.

Eggs also present serious environmental concerns — 51 percent of greenhouse gas emissions come from livestock. The food-to-energy output of an egg is 39-to-1. This means it takes a tremendous amount of grain to yield one egg, and that grain in turn requires the use of nitrogen-containing fertilizer. Nitrous oxide is a major contributor to ozone destruction and a high concentrations of animals lead to waste that gets washed into waterways and causes dead zones.

Furthermore, livestock consume more food than it would take to feed the 1.3 billion people who go to bed hungry every night.

Hampton Creek’s claims that its food-to-energy output 2-to-1, but Tetrick said none of this matters unless the egg alternative is cheaper. Hampton Creek claims to be 48 percent more cost effective than conventional chicken eggs.

“Most people, like my dad, don’t care about this stuff, and corporations are driven by their bottom line,” he said. “We want to taste just as good and be cheaper than all the egg options out there, so everyone can make the healthier choice.”

Hampton Creek’s vegan mayo line is now available in Whole Foods around the country. The company is also pursuing partnerships with large food corporations, who would replace eggs with plant-based alternatives in products like packaged cookies or muffins. Hampton Creek said it has signed agreements with six Fortune 500 companies in the past 90 days, including some of the largest food manufacturers and retailers in the world. But it wouldn’t divulge further details.

Tetrick guided me through a tour of Hampton Creek’s work area, which included rows of scientists putting mysterious substances into test tubes, cabinets filled with various pea specimens, and a little cooking area where a chef was making scrambled “eggs.” 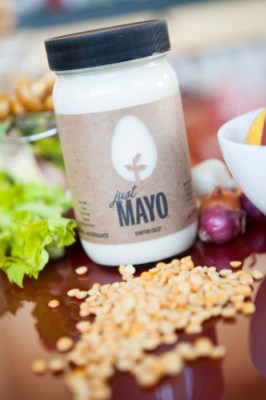 Above: Just Mayo — no eggs here!

The team has tested upward of 3,000 types of plants to find species with the molecular properties that resemble eggs, treating “food like software” in how they quickly experiment and iterate. Taste is actually one of the last factors they address. First, they have to achieve the right emulsifying/congealing properties and texture.

Hampton Creek’s chef set out a little tasting menu for me of Hampton Creek products, including scrambled eggs (which is still in “beta”), french toast, mayonnaise, cookies, and a cookie dough dessert. Across the board, I would have had no idea I was eating vegan, except for perhaps the scramble.

Tetrick is a muscular-looking dude, so I was a rather surprised to learn he was a vegan. He is originally from Alabama, a former college football player, and a Fulbright scholar who spent seven years working in sub-Saharan Africa for former President Bill Clinton and the president of Liberia.

Hampton Creek is by no means a typical Bay Area startup. It deals with a perishable, physical product that a significant chunk of the population may not even think they need. Still, it has managed to attract tremendous interest. Bill Gates is a backer (if you needed any more convincing), and Hampton Creek previously raised $6 million from Founders Fund, Collaborative Fund, and Khosla Ventures.

Li Ka-shing’s investment will enable Hampton Creek to expand its operations to the Asian market, which produces and consumes a huge amount of eggs and is also plagued by egg health scandals. Jerry Yang and AME Cloud Ventures, Ali and Hadi Partovi, Jessica Powell of Google, Scott Banister, and Ash Patel also participated in the financing.