We’ve seen a move in exit strategy lately from IPOs to acquisitions amid talk that M&A exits take less effort and produce higher returns. But I’ve crunched the numbers, and from what I see, IPOs still create the strongest returns.

IPOs have picked up since 2016 — we’ve seen the likes of Blue Apron, Cloudera, Snap, and Tintri take the leap. But notable exceptions, such as Chewy, Moat, Iron Planet, and Veracode highlight the fact that several private venture-backed companies continue to find acquisitions more attractive. For example, in January, applications management company AppDynamics was finalizing its IPO when it opted, instead, for a $3.7 billion acquisition by tech giant Cisco.

High-profile startups can also look beyond technology firms to find multinationals with the funds and incentives to acquire them.

Acquisition can be a relatively easy exit path, since public companies are looking for synergies with high-potential startups — or looking to defuse competitive threats. For e-commerce start-up Dollar Shave Club, that meant a $1 billion acquisition by Unilever in 2016. The packaged goods giant paid about five times the revenue Dollar was expected to bring in that year.

Taking a company public certainly involves challenges and risks. An IPO means added regulation, increased scrutiny, and greater costs. Market pressures on public companies can lead to a short-term focus. And, as the a few unicorn IPOs illustrate, even high-profile startups face challenges after going public. But for long-term wealth creation, which is typically the aim of any liquidity event, IPOs have a better track record than acquisitions.

My team at EY compared venture-backed companies that went public between 2004 and 2016 with those that were acquired during the same time period to determine which generated more market wealth. We calculated valuation/market capitalization at the time of IPO, at the end of first day trading, and at one month after IPO, and we found that IPOs had significantly higher valuations than acquisitions.

Additionally, we found that the financial terms of an acquisition were not disclosed in the majority of cases. This suggests that in many cases an acquisition is a suboptimal outcome and represents largely a return of cash to investors as opposed to a meaningful return on investment. 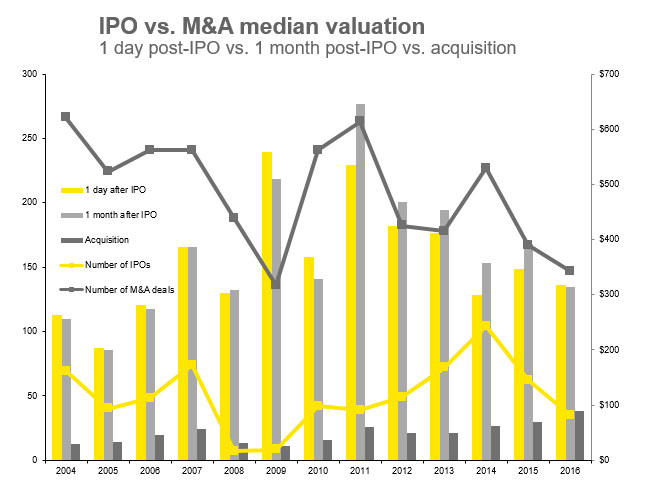 IPOs also foster job creation, according to a 2011 study by the U.S. Treasury Department’s IPO Task Force. The study notes that, by one estimate, “the decline of the U.S. IPO market had cost America as many as 22 million jobs through 2009.” Speaking recently on CNBC, Nasdaq CEO Adena Friedman noted that 76 percent of job creation comes after companies go public. “Job growth and wealth creation could be stifled if more companies don’t go public,” she said.

While it is easy to get distracted by strategic acquisitions of companies like Dollar Shave Club for sums of $1 billion or more, it is important to consider the climate in which they occur. The number of venture capital-funded startups in the United States has surged — from 5,350 in January 2004 to 16,064 in March 2017 — according to data by Dow Jones VentureSource. Meanwhile, the number of companies able to make billion-dollar-plus acquisitions has not kept pace.

For these reasons, companies seeking to maximize wealth for their stakeholders should seriously consider an IPO over an acquisition. Instead of seeking a quick exit, companies with the potential to go public should remember Facebook’s example. Five years after its rocky IPO, the company is stronger than ever.

Jeff Grabow is a U.S. Venture Capital Leader at EY. He has more than 25 years of experience with high technology startup companies in Silicon Valley and works directly with rapidly growing, venture-backed companies and venture capitalists.