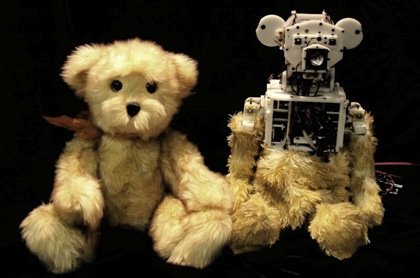 “Now three or five engineers can start a robotics company. My mission is to help them,” says Dimitry Grishin of Grishin Robotics, an investment fund for robots, and their makers.

Grishin is the CEO of Mail.ru, a Russian email and social media portal worth around $7 billion. His Mail.ru co-founder Yuri Milner runs headline-grabbing investment firm DST, whose investments include Facebook, Zynga, and Groupon and who offers $150,000 to every new startup from incubator Y Combinator.

Robotics is still a niche field, dominated by academic research and expensive humanoid showpieces. According to Grishin, that’s about to change. “Robots will become mass-market products. Where we are with robotics now is where personal computers were in the early 1980s.”

Robots sense, move, consume energy, and often need some basic intelligence. They are complex creatures consisting of sensors, motors, control software, manipulators like robot arms, and a power supply. Due to the cost, hardware innovation has traditionally taken place in large companies. Venture capital is still reluctant to make bets on risky hardware projects. So for robotics startups, the biggest problem is often cash and not technology. However, the cost of components is dropping, and open-source robotics software like Willow Garage’s ROS is making robots more cost-effective. That’s where Grishin comes in.

Grishin Robotics will make investments of between several hundred thousand dollars and several million from its $25 million fund. Grishin’s first investment is Double Robotics, whose slinky telepresence robots seem tailor-made to glide soundlessly around a chic interior. It’s exactly the type of product Grishin is looking for. “It’s very important to bring design into the culture of robotics. Focus on simple problems. If you build a product which costs several thousand dollars, you are done. You have to make it cheaply enough to make it accessible to a mass market,” he said. Hardware startups do have one big advantage over software; people still pay for physical products.

Grishin also wants to bring Internet startup culture to the robot world. “Roboticists spend years and years on research. Then years on a prototype. They need to do quicker iterations and get feedback from users. Without user feedback, you can’t create a good product.”

Robots have toiled for years in manufacturing, medical applications, and the military. Beyond a few outliers like iRobot’s Roomba, few have stepped out of those silos and into our daily lives. To become consumer products they need to operate in the messy world of human beings and not the sterile and structured environment of the factory floor. Our relationship with technology is also a social one, especially once that technology starts to look life-like. MIT’s adorable cardboard robot is an excellent illustration of the future social life of robots.

Education and entertainment are the first sectors Grishin Robotics is targeting, but the fund is open to proposals from all areas of robotics, and from all geographies. Grishin is particularly passionate about robots in education. “Robotics require electronics, programming, hardware. So if students learn robotics, they are learning most of the important skills they need for the future job market.”

Whether they will be recycling waste, harvesting crops, helping the wheelchair-bound to walk, or watching over the elderly, the robots are coming.