Two years ago, the $2 million seed round was unheard of — a funding unicorn of sorts. Today, you hear about a new one every day.

As seed rounds swell, the number of Series A and B rounds remain the same, leading to the now-familiar Series A crunch. 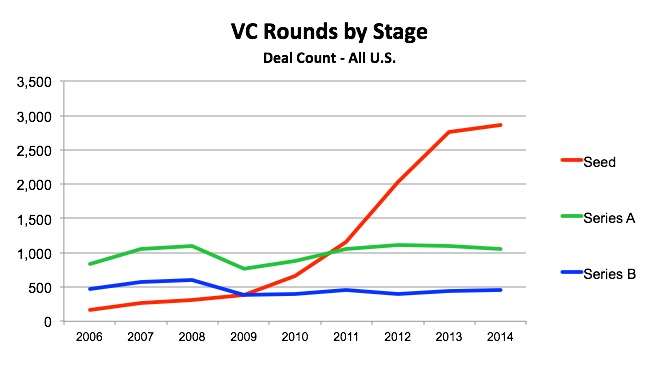 The crunch is a daunting, if surmountable, barrier for coastal startups. For startups in Middle America, it is the Valley of Death.

Stranded between funding trends, these regional startups are left without the resources they need to define their companies as long-term investments. Unlike consumer-facing startups, which are difficult to justify being located away from the coasts, many of these startups have a “reason” to have been launched in the middle of the country. They are B2B software startups (almost always SaaS) and are poised to disrupt the mainstays of American industry — manufacturing and energy, among others — but are stalling before the A-stage for lack of further funding opportunities.

Given the economic importance of Middle America, that’s not just bad for entrepreneurs. It’s a domino effect that’s bad for America.

Knowing that, no Series A investor wants to inflate the size of their round to reflect oversized seed funding. The return won’t be there on the back-end.

Few Middle American seed investors have the means to lead a $3 to $5 million Series A round, so startups look to angels for smaller round extensions, or go for a shrunken Series A. They slow their growth to stay in line with the resources they can attain, which further hampers them from reaching the run rate that will attract coastal investors.

This gives entrepreneurs three choices: fade slowly and hope for the best, relocate to either coast (even if your target market isn’t there), or find new resources to help build the kind of B2B software company that coastal investors will travel for.

That is the real Series A crunch, and it is stymieing the very startups that could not only be the next unicorns but are staged to drive the next industrial revolution.

Ignore at your own risk

All of America’s major industrial ecosystems are poised for disruption, and many are located in Middle America. From Rust Belt manufacturing to the energy sector in Texas, these are the industries that have been slow to adapt to the consumerization of IT.

Big data, mobile, and the Internet of things (IoT) have come together in the form of an array of startups that have both regional subject-matter expertise and technological savvy. And these startups today will become the industry cloud companies of tomorrow. Whether it’s the complexity of alerting an automobile manufacturing line to production flaws midstream, or the simplicity of allowing pen and paper oilfield processes to become mobile and digitized, these startups represent the next wave of production technology, and the blue-chip companies in their backyards know it.

Rather than being acquired by — and integrated into — coastal enterprise software companies, many of these new companies will thrive in the ecosystems in their backyards. Series A investors currently overlook startups based on run rate, but that says nothing about the quality and global applicability of their products.

Like diamonds in the rough, all these startups are missing is the machinery to polish them up for the next round. Even multibillion-dollar, centuries-old brands understand the value of new technological capabilities, and Middle American startups are best positioned to bring them that value. Unfortunately, there aren’t enough A rounds to go around, so many of these startups may be ignored, won’t be given a chance, and will be left behind.

Compare that to a $35 million anonymous messaging app with no revenue, and ask yourself: Where is the real value?

The answer is clear: Middle America.

Blair Garrou is a Managing Director at Mercury Fund, a seed and early-stage venture capital firm focusing on technology innovation originating in the U.S. Midcontinent.