The Studio, a startup that’s setting out to help merchants and product developers manufacture their own customized goods, has raised $11 million in a series A round of funding led by Ignition Partners, with participation from FJ Labs, VTF, WTI, Firebolt Ventures, and Interplay Ventures.

Founded in 2013, The Studio — which stylizes its name as The/Studio — targets anyone from individual creatives to boutiques and enterprises looking to design and produce their own custom products. Though it could be used for a single item, which many of its customers do for prototyping purposes, that can be more expensive. According to the company, the sweet spot for production is around 100 items, at which point the price is low enough for the customer to make a meaningful profit.

The Studio is ultimately looking to work in multiple product verticals, but for now it’s focused squarely on fashion manufacturing — so you won’t be able to produce 3D-printed jewelry quite yet. But in time, the company hopes to expand into furniture and consumer electronics.

There may be two broad kinds of customers: those who have designs prepared and are just looking for access to manufacturing and the broader supply chain, and those who require design support. The Studio offers access to a product design team and works with customers to finalize their product. 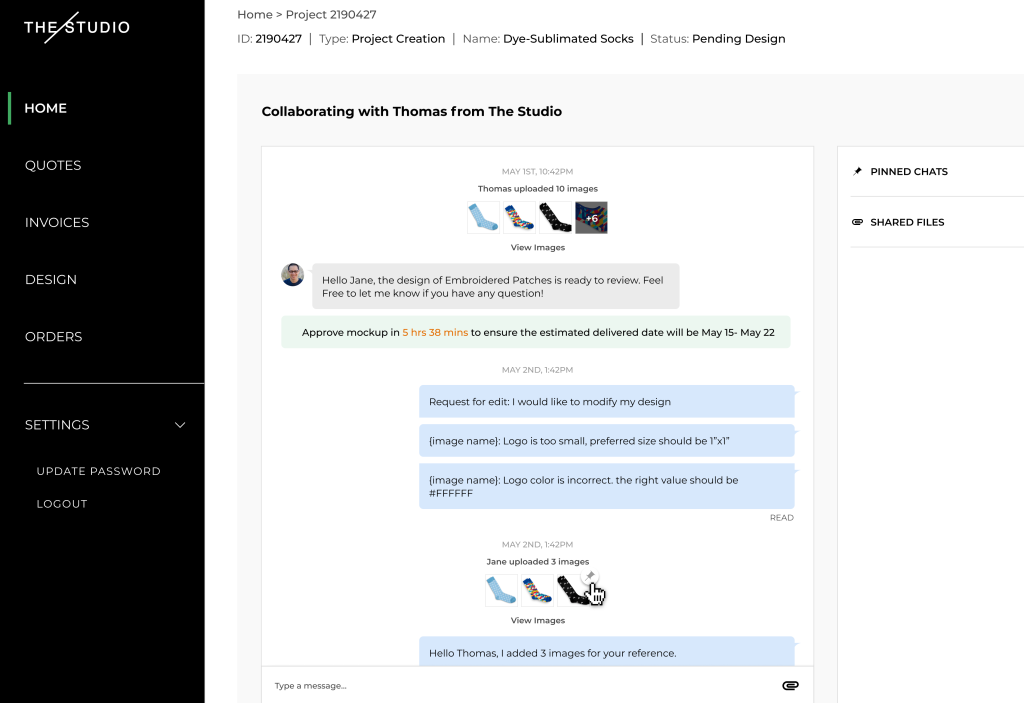 Above: The Studio: Customer dashboard (chat)

Through the platform, customers are also given access to the manufacturing and shipping status of their order.

Above: The Studio: Status

It’s worth noting here that The Studio offers a software platform — it doesn’t do any of the actual manufacturing itself. It connects its customers, which have included Nike, Live Nation, and Disney, with pre-vetted factories that do the actual final production. Most of the factories are in China, but some are also based in India, Pakistan, and the U.S.

So The Studio is kind of like Alibaba, except with a full interface for designing and customizing the products.

“The Studio is the first solution for quick cloud-based access to custom manufactured products without having to deal with the costs and risks of building out a supply chain,” said The Studio founder and CEO Joseph Heller. “Manufacturing a product is still extremely complicated, and traditional supply chain teams were not set up to support the quick turnaround times and small-batch requirements of modern retail. Big box retail is being replaced with pop-up stores, limited edition ecommerce offerings, and millions of new brands. There is now an incessant race to get products to market quicker, to pinpoint customer demand with data, and to be nimble enough to scale accordingly.”

Manufacturing is a $12 trillion industry globally, and there has been a tangible push to reinvent the manufacturing processes, which has garnered significant investments from the venture capital (VC) realm. A few months back, Atomico led a $10 million investment in Oden Technologies to create smarter factories that leverage big data — it’s all about optimizing output and cutting waste.

On-demand product manufacturing has also emerged as a key trend. Last month, London-based Unmade raised $4 million to help fashion brands make customizable clothes — Unmade’s software platform integrates with a brand’s own production processes, including their machines, and connects consumers with the brand so they can tweak a particular item’s design. Again, cutting waste is a big factor here, as the process is designed to support a more sustainable business. Brands only need to produce garments that are actually sold, ensuring that supply meets demand rather than surpassing it.

Just yesterday, news emerged that 3D printing platform Shapeways had built an integration for Shopify that allows its ecommerce customers to offer customizable 3D-printed goods on-demand. A few months back, Shapeways raised $30 million, taking its total funding to the $110 million mark and making it just the latest in a long line of 3D printing startups to raise large sums of cash.

Mass customization and on-demand inventory have been difficult to deliver with traditional manufacturing methods, but this sector is about to take off in a big way. Just last year, Amazon was awarded a patent for a system that’s capable of producing different kinds of products, including garments, after an order is placed.

“Of all the problems that remain unsolved within fashion supply chain, digital transformation is one of the most complicated and consequential,” added Ignition Partners’ Preeti Rathi, who now joins the board at The Studio. “The Studio has an unparalleled technology platform that simplifies supply chain and offers agility and nimbleness — something that is a must-have for brands in today’s age of social media.”

The Studio, which is headquartered in Los Angeles, claims more than 100,000 customers currently use its platform and that it has facilitated the production of over 32 million products. A spokesperson told VentureBeat that 90 percent of the company’s orders come from the U.S. and Canada, with additional business emanating from Europe and elsewhere in the world.

The Studio has been entirely bootstrapped until now, so an extra $11 million in the bank should go a long way to helping it scale.