Updated at 3:42 p.m. Pacific to add context about Salesforce Ventures.

Last year, venture capital funding hit its highest level since 2000, coming in at $47.3 billion, according to CB Insights, a startup that keeps tabs on private companies. And more than a quarter of that money came from companies’ venture arms.

That’s according to a new report out today from the firm.

The report says corporate venture investors made 656 deals, altogether shelling out $12.31 billion. That dollar figure is up 76 percent over 2013, and the deal count is up 25 percent. One interesting factor: Corporate venture firms are making more seed-stage investments than they did just a few years ago.

Perhaps more interestingly, the report zeroes in on the most prominent corporate venture firms of the past year.

Here’s the list of the top 10, according to the CB Insights’ data. 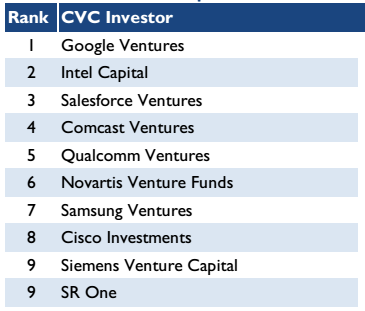 It’s fascinating to see Salesforce Ventures make the list. Sure, Salesforce is a major player in enterprise software, with an ecosystem of startups developing on top of its software and platform, but Salesforce Ventures itself launched its first fund just five months ago. The company had made investments in startups for 10 years, but the venture arm never had a dedicated name.

One firm of note that didn’t make the top 10 but did make the top 20 is Bloomberg Beta. That firm is still very new, having launched less than two years ago, and yet, it’s ahead of prominent outfits like Verizon Ventures, GE Ventures, and even Microsoft Ventures.

And sure enough, Google Ventures had the most U.S. exits in 2014 of any corporate venture investor, according to today’s report. That includes Appurify, DataPad, Nest, and HubSpot, among others.