Recent history alone should be enough to prove that enterprise tech is a far more stable, profitable category than consumer tech. Take for instance the dozens of successful exits (either through acquisition or IPO) in the U.S. enterprise tech space in just 2016 and 2017. By contrast, the U.S. consumer tech space has seen only a handful of successful outcomes over the same time period. 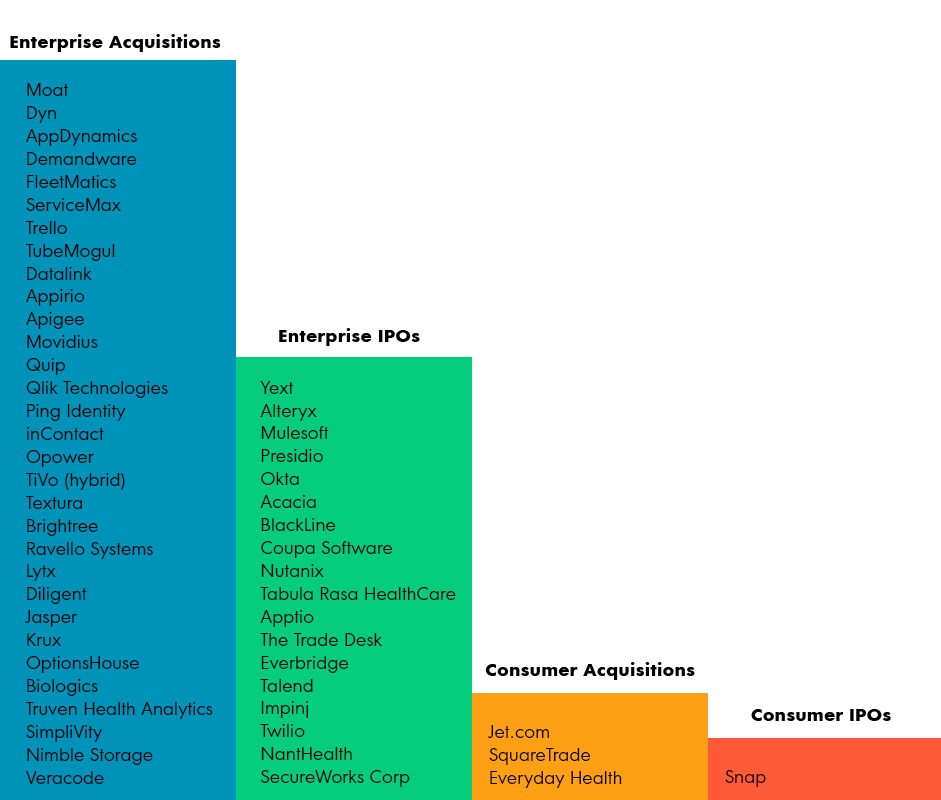 Above: 2016 and 2017 acquisitions and IPOs of U.S. based companies without previously successful exits. Acquisitions include companies sold for more than $400 million.

The disparity between enterprise and consumer tech companies (using financial outcome as the marker) comes primarily from the many exit options that exist for the former well beyond an IPO. By contrast, acquisitions that provide investors with outsized returns in the consumer tech space can really only be made by a handful of companies – typically just Google, Facebook, and Amazon. In 2016, I count roughly 70 U.S. technology exits and acquisitions of more than $100 million. All but six were enterprise tech. The table above gives you a sampling, displaying companies that were acquired for at least $400 million.

When technology companies – either consumer or enterprise – do go public, the market has traditionally favored enterprise companies because they have a clear path to delivering shareholder value. Nine out of 10 enterprise tech IPOs in 2016 ended the year in the black – the basket finished 39.8 percent above where it debuted. The one recent consumer tech IPO, Snap, dropped nearly 7 percent in a day after Facebook announced copycat features.

On the other hand, enterprise companies like Acacia Communications were profitable at IPO or plan to be profitable within two years of going public. Snap reported losses of $514 million compared to revenue of just $404 million in 2016 and warns it may never be profitable.

Over the years, entire consumer categories have gone up in smoke. Flash sales (Gilt), couponing (Groupon), localization (Foursquare), and social media (Twitter) have shown themselves to be categories fraught with euphoric highs early in life, but they languish as the novelty wears off and competitors emerge and land grab.

On the other hand, SaaS dollar retention rates are often at or above 100 percent, which means many enterprise companies could actually turn off all sales and marketing spend and still continue to grow! This stability comes from a high cost of switching providers and the low price sensitivity of many buyers.

Meanwhile, much of consumer tech lives and dies by ad revenue (think Google, Facebook, Snap, Twitter), making it more susceptible to market turns and changes in user behavior. Consumer tech verticals where revenue is driven by consumer spend (food delivery, for example) have struggled, too, because of low retention. With VCs falling over themselves to win deals in this space, competitors abound, which further drives down the costs of switching providers. This phenomenon (both exuberance from VCs and lack of brand loyalty from consumers) is evident in countless consumer markets like ridesharing, on-demand services, and dating sites.

But it’s not just the stability and clear path towards success that make enterprise tech a sure bet. There’s also a unique community that’s emerged in the enterprise tech space, and participants have both the ability and the willingness to share best practices across companies since, unlike in consumer tech, moats in the SaaS space can be maintained relatively well. In the marketing automation space, for example, there’s been room for HubSpot, Marketo, Eloqua, and Pardot to all have successful outcomes since these companies focus on particular market segments with distinct value propositions. And HubSpot contributes to the industry’s success by funding inbound.org, an online community of 200,000+ marketers. The same thing has happened for eCommerce platforms, business intelligence, and many other categories.

This knowledge sharing also allows for benchmarking across companies, which helps everyone identify gaps and areas of improvement. A rising tide lifts all boats as they say. For these reasons enterprise tech is more of a sure bet than ever.