“Urban mobility” has emerged as something of a buzzword across the technology realm, with countless companies attempting to tackle the perennial problem of city congestion and transport “gaps.”

There are bike-sharing startups such as Mobike, Ofo and LimeBike, which are raising crazy sums of cash to help people traverse major conurbations on two wheels. Then there are the myriad future-gazing “flying car” initiatives, such as Lilium, that are looking to circumvent busy thoroughfares by taking to the skies. And automobile makers and tech companies are also battling it out to get self-driving cars ready for prime time.

However, one tool that has long existed to help commuters, tourists, and locals get around busy cities is the humble transit app — a service you install on your smartphone that helps you get from A to B in the quickest or most convenient way possible.

One company operating in this space is Canadian startup Transit, which today announced a $5 million series A round of funding round led by Accel, with participation from Real Ventures, Accomplice, and the Business Development Bank of Canada (BDC).

Founded out of Montreal in 2013, Transit is one of a number of companies that offer an all-encompassing, user-friendly city transport app, one that joins the dots between your starting point and destination by figuring out which combination of public transport options works best. In addition to traditional modes of transport, such as buses and trains, Transit also integrates bike-sharing, car-sharing, and the mighty Uber into its service. 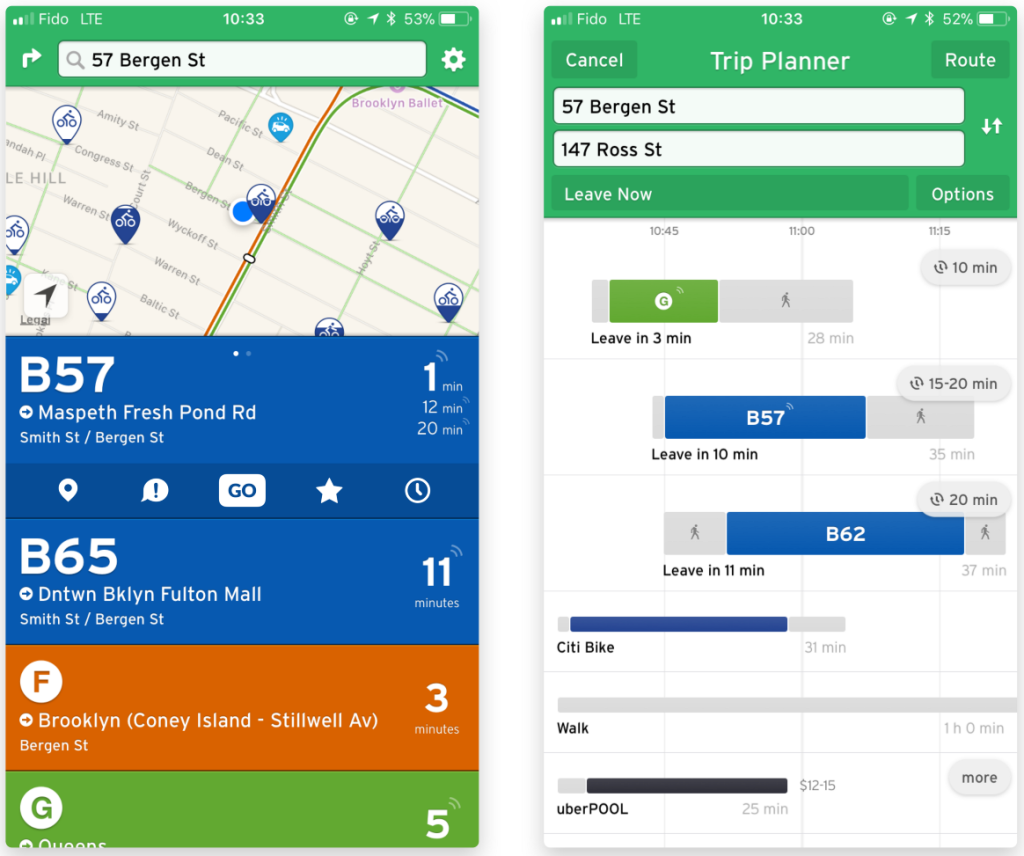 Though Uber lends its data to a number of similar services, back in May the ride-hailing giant announced a tie-up that would bring Transit data into the Uber app, a tacit acknowledgement of how people already combine Uber with other forms of transport to get around cities.

Transit had previously raised around $4 million in seed funding, and the company said it plans to use this latest tranche to “make it even easier” for its users in more than 130 cities get around without owning a car.

“This new funding won’t just help us build a better app for our users  —  it’ll give them front row seats for the next urban revolution,” the company said in a blog post.

Other notable players operating in this field include Israel-based Moovit, which has raised north of $80 million, and London-based Citymapper, which has grabbed around $50 million. One thing all three of these companies have in common is an interest in harnessing data to grow their offering into something more than a simple transport information app. Moovit, for example, is opening its treasure trove of crowdsourced mapping data to cities around the world as a way to improve urban mobility while helping it create a more robust business model.

Elsewhere, Citymapper has taken to launching its own bus and carpooling services as it seeks to demonstrate how its data can reveal gaps in public transport infrastructures.

Likewise, Transit is seeking to sell itself as a powerful data source for cities to tap into. Last year, the startup was chosen by the Massachusetts Bay Transportation Authority (MBTA) as the city’s official transit app. The city’s residents already have loads of transit apps at their disposal, but the idea behind directing people toward Transit’s app is that the city will have access to better travel data from a single source.

Transit is also taking things a step further by partnering with local bike-sharing ventures, and it even allows travelers to pay for their bike directly through its app.

“We’re continuing to build the fully integrated experience for urban transportation — planning and tracking trips, signing up to new services, purchasing passes, and booking rides across all modes and services,” a spokesperson told VentureBeat. “At the core, we’re focused on public transit, but we leverage that strength to promote other shared transport: bike-share, cars-hare, ride-hailing, and eventually shared autonomous vehicles.”