TripIt, an online service that consolidates your travel info from various companies and web sites into a single itinerary, is ready to start charging its users for extra services and data. The pro service sounds like something that a big chunk of TripIt’s target audience (i.e., frequent business travelers) would be willing to pay for, and there’s a lot of potential here for more services to come.

A big part of TripIt Pro revolves around providing real-time data to travelers, specifically about flight delays and cancellations, and about finding alternate flights when those problems arise. Many airlines and travel sites provide these updates already, but TripIt co-founder and vice president of business development Scott Hintz says there are advantages to getting this information from an independent source. If your flight is canceled, your airline probably won’t tell you if another flight from a competing airline has open seats and leaves in half an hour. Plus, there are “mad scientists out there” working to predict delays and cancellations even before they’re announced, Hintz says, and if those efforts pan out, they could also be incorporated into the pro service.

“If we can help you avoid missing one flight or get to one meeting on-time, it’s a pretty simple business case [to pay for TripIt Pro],” Hintz says. 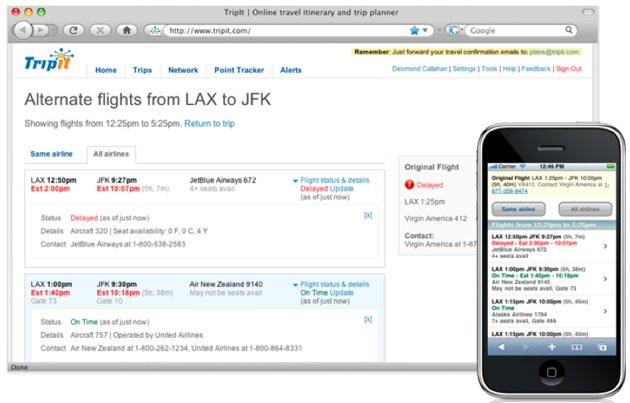 That real-time flight information could also be useful for other services that use TripIt data via the San Francisco company’s application programming interface. (TripIt gets a share of the revenue from some of the commercial apps that use its API, such as third-party iPhone apps — TripIt has an iPhone app of its own, too — or expense applications.) For example, a rental car company or a hotel could build an application for finding out when a traveler might be late. TripIt Pro might also add those kinds of alerts in the future as well.

Other pro features include a Point Tracker that aggregates all the points you’ve earned from airlines and hotels, and the ability to share your itinerary with important contacts. It will cost $99 a year, but it’s starting at a lower rate of $49 a year until July 31. Hintz says the company will also offer lower “enterprise pricing” for big companies that want to buy TripIt Pro for many of their employees at once.