While the stock market’s Trump bump may have faded, the president’s demand for good-paying American jobs may prove more lasting and could lead to new tech employment in the Midwest. “We’ve seen a huge uptick in interest from Fortune 500 companies,” said Mark Orttung, CEO of Nexient, a company that provides “outsourced” agile software development to large corporations and mid-sized companies across America. The company employs more than 300 developers at delivery centers in Michigan and Indiana.

“Inquiries have more than doubled in 2017,” Orttung told VentureBeat. “All of the discussion of immigration reform and visa reform have caused a number of Fortune 500 companies to reevaluate their offshoring, and [some] are looking for a domestic solution.” 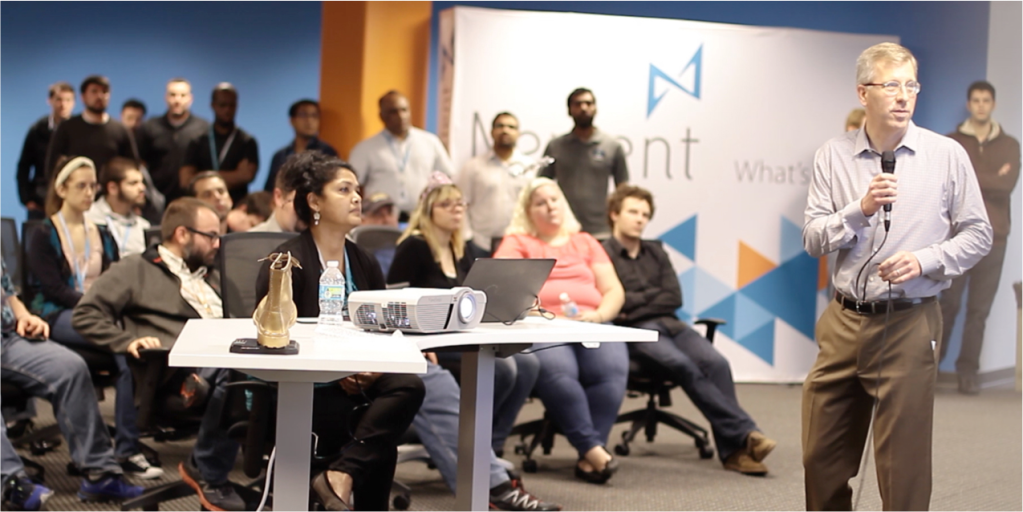 Above: Nexient CEO Mark Orttung at a company meeting. On the table is the company’s Golden Boot, awarded annually to the employee who “kicks coding ass.”

On the campaign trail as president-elect, and in his joint address to Congress, President Donald Trump consistently called for companies “to buy American and hire American.” And before the president became embroiled in headline-grabbing controversies involving travel bans and Russia, he was making news with public rebukes of companies like Sprint, Carrier, and Ford for moving jobs overseas. (Carrier eventually moved a number of jobs to Mexico anyway.) Tech companies were also revealed to be especially vulnerable to potential changes in the H-1B visa program. Facebook, for instance, relies on H1-B employees for 15 percent of its workforce. But the outsourcing of U.S. tech jobs to regions like India and Eastern Europe began in earnest more than a decade ago, at about the same time our president was starring on The Apprentice. 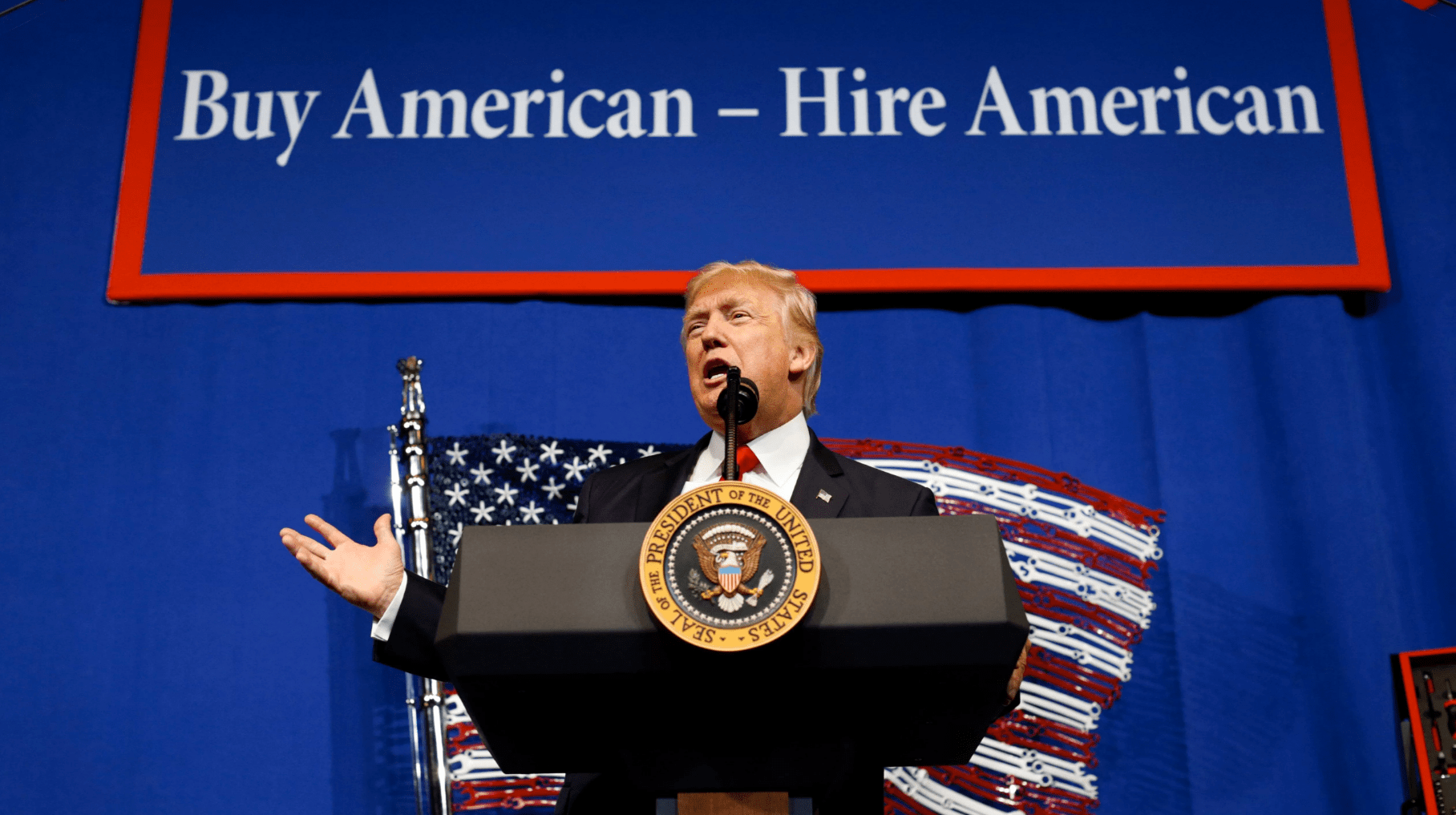 Above: U.S. President Donald Trump speaks before signing an executive order directing federal agencies to recommend changes to a temporary visa program used to bring foreign workers to the United States to fill high-skilled jobs during a visit to the world headquarters of Snap-On Inc, a tool manufacturer, in Kenosha, Wisconsin, U.S., April 18, 2017.

For companies moving jobs overseas, it’s about profits, not politics. Reducing costs is commonly cited as the top reason for moving U.S. jobs to other countries, according to a study from Statistic Brain Research Institute. While most off-shored jobs are in manufacturing, 43 percent of overseas work is tech-related. With more than 211,000 IT jobs outsourced to other countries in 2015, it’s not surprising that the study deemed 18 percent of jobs in San Jose, the epicenter of Silicon Valley, “at risk for outsourcing.”

Orttung describes this shift by citing data showing that in 2000 there were 73 U.S. IT workers for every one Indian IT worker, but by last year, there were just 0.4 U.S. IT workers for every Indian IT worker (see chart below). And yet American tech companies moving jobs overseas often encounter workflow difficulties due to time zone differences, language barriers, and a lack of cultural understanding and context for say, an app or a consumer-oriented website. More recently, companies of all stripes, from big name corporations to Silicon Valley stalwarts, are also discovering that hiring overseas workers is often at odds with agile development methods. This has given rise to a new breed of 100 percent domestically sourced American firms. Above: Outsourcing of U.S. IT jobs to India has helped build that country’s technology sector.

An investment in the U.S. workforce

Nexient offers companies a business-savvy way to gain high-quality outsourced development, reduce costs, and, well, to help America. Orttung explained that patriotism was “absolutely” a motivating force for Nexient: “U.S. companies rushing to the lowest IT cost were digging a hole for themselves in the long run. They were hollowing out their teams and would not have the talent required to keep up” with companies that actively invest in their workforces, he explained.

“The rush to outsourcing was also breaking the overall talent pool for IT in the U.S. If companies were not creating entry level positions, there would be a generation of graduates who couldn’t develop as enterprise-grade technologists. They wouldn’t get the chance to build solutions and learn how technology delivers value in an enterprise context. If there were no entry level jobs, then in 10, 15, or 20 years, there would be no people with enough experience to take on the mid-level and leadership positions in IT. The U.S. would lose its ability to compete,” Orttung said.

Founded in 2010, Nexient has its largest delivery center in Ann Arbor, Michigan, which enables the company to hire talented developers while delivering cost savings to its clients. Orttung admits that Ann Arbor may not be as glamorous as San Francisco or as attractive as Palo Alto for hyper-ambitious programmers, but he sees the differences as strengths. Nexient actively recruits from about two dozen Midwestern universities and appeals to graduates who seek a high quality of life, lower cost of living, and the opportunity to become part of an agile team. Sure, average salaries are 45 percent higher in Silicon Valley —  the average salary for a full stack developer in Palo Alto is $134,562, compared to $92,644 in Ann Arbor — but the cost of living is much, much more expensive there. For instance, housing in Palo Alto is 699 percent more expensive than in Ann Arbor, and the overall cost of living is 324 percent higher.

Nexient’s other delivery centers include Okemos, Michigan and Kokomo, Indiana, and the company maintains a headquarters in Newark, California. Orttung says that access to engineering talent drove the company’s location decisions, and he’s skeptical that IT jobs are a quick fix for places hurt by a loss of manufacturing jobs or farm closures. The Kokomo facility, for example, is located near the shuttered Firestone factory (and until recently occupied space there), but that’s coincidental. Orttung points out that Michigan State University is just a few miles away in Lansing, and several other colleges are nearby. “We need access to a certain level of talented pool,” he said. “We specifically did not choose rural settings.” 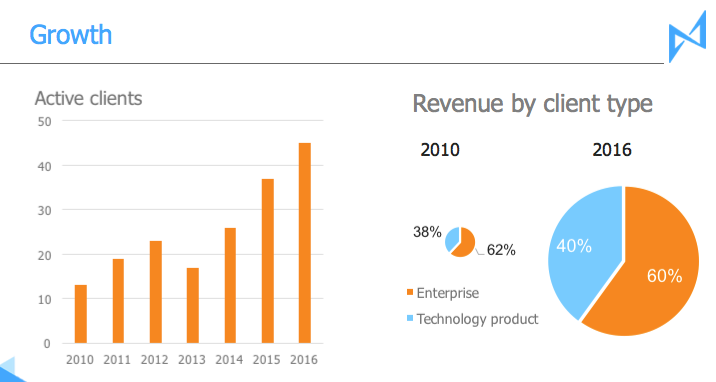 Above: Nexient’s U.S.-based outsourcing has grown steadily and is now experiencing a “Trump bump.”

The value of ‘outsourced’ agile development

Orttung declined to share his company’s revenues, and due to confidentiality agreements is prohibited from disclosing customer names. But he described Nexient’s clients as including tech companies that request SaaS, fintech, and traditional software development, as well as large corporations that include big box retailers, one of the top five U.S. banks, major hospitals, and entertainment and media companies.

Last year, Nexient had more than 40 active customers, attracted to the business advantages of the company’s expertise with agile development, Orttung says. “We don’t approach [the sale process] as a labor arbitrage pitch. We often compete with lower cost firms from India, Eastern Europe, and China, and with higher cost local boutiques,” he said. “We are not a low-cost option.”

But there’s also something bigger afoot for “companies who see the power of digital technologies and invest in their workforce to build a stronger team,” Orttung said. “Nexient was created to help U.S. companies remain competitive in the digital era, as well as develop the next generation of U.S. IT leaders.”