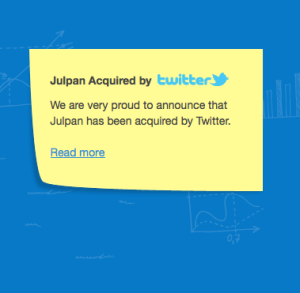 The move is an acquihire of sorts, since Twitter has appointed Julpan founder and CEO Ori Allon as its new director of engineering. As part of the acquisition deal, Twitter will also get Julpan’s technology and its team of 12 employees, who will continue working from Julpan’s New York-based office.

Allon is well-known for his work on search algorithm Orion, which Google purchased in 2006 after outbidding both Yahoo and Microsoft. Google hired Allon to integrate his work (originally the product of his PhD efforts at the University of New South Wales) into the company’s main search algorithm, which is where he remained until leaving to found Julpan in 2010.

Not only is this a good fit for Twitter, but it will also help fill the talent-void left by departing chief scientist Abdur Chowdhury, who announced his departure last week.

“Twitter gives us a chance to make an even greater contribution toward instantly bringing people closer to what is most meaningful to them,” wrote Allon on Julpan’s blog. “We look forward to joining forces with Twitter’s engineering team to explore how we can best integrate and optimize Julpan’s innovations.”