Now, he begins his day in a small Toronto office, building a cannabis brand that sells fancy smoking accessories such as vaporizers and bongs that cost up to $335 CAD ($261.72 USD).

Gertner is among a growing group of entrepreneurs and investors who are trading in high-paid corporate jobs in the technology and finance sectors to launch start-ups focused on the fast-growing marijuana industry.

Two decades after the first legalization of medical marijuana by a U.S. state, pot-based businesses are professionalizing their operations by luring top talent from other industries and billions of dollars in investments from Wall Street firms. A new commodity index even offers data on the going rates for greenhouse and field-grown weed.

Gertner still gets surprised reactions to his career change, as when his mother asked: “Can’t you just get another job at Google?”

And yet he’s raised $10 million in capital in ten months as the chief executive of Toyko Smoke, despite the continuing taboos and legal risks in the industry.

The legal cannabis market, currently worth about $8 billion, is predicted to triple in size to $22.6 billion in total annual sales by 2021, according to cannabis industry tracker, Arcview Market Research. That could make it bigger than the America’s most profitable sports organization, the National Football League, which saw about $13 billion in revenue last year and aims to reach $25 billion by 2027.

The influx of capital helps finance the paychecks of 150,000 workers in the legal U.S. pot industry, representing job growth of 20 percent from a year ago, according to an estimate from the cannabis website Leafly, a marketing firm for dispensaries and other cannabis firms.

Eric Eslao, founder of Defonce Chocolatier – which makes artisanal cannabis-infused chocolates costing $20 a bar – was a senior production manager at Apple just over a year ago. He feared the stigma of joining the weed industry, but it didn’t stop him.

“The opportunity was too good not to make the jump,” he said.

Thirty states have legalized marijuana for recreational or medical use, but possession and sale is still banned at the federal level. 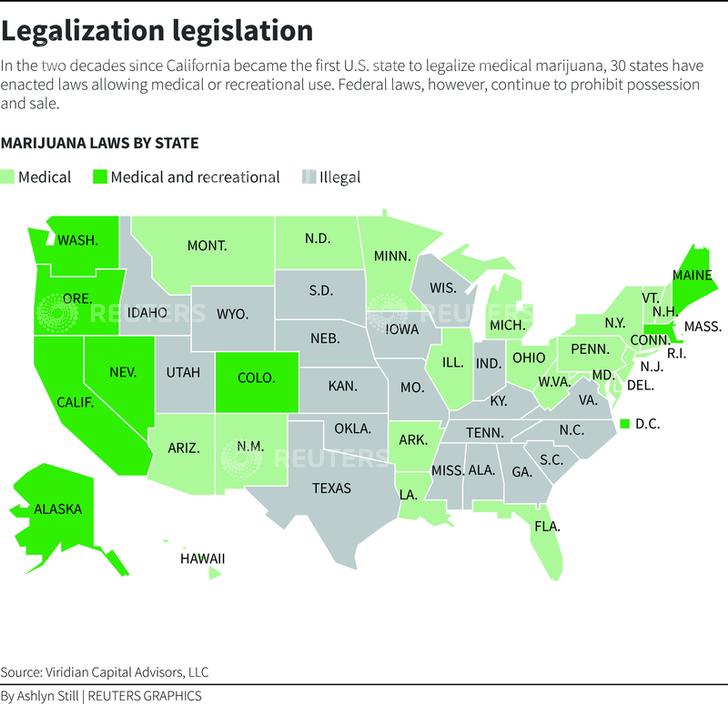 The administration of President Donald Trump has sent mixed signals on its enforcement policy. Attorney General Jeff Sessions has vowed to crack down on the pot trade in states with legalization laws, but Trump has extended a ban on using federal funds to interfere with the industry through the end of this year.

Americans increasingly support marijuana legalization, according to the Reuters/Ipsos opinion poll. The number of adults who believe it “should be legal” to possess small amounts of marijuana rose to 54 percent in a poll conducted between Oct. 27 and Nov. 10, up from 41 percent in a similar poll in 2012.

Still, the specter of federal enforcement makes it difficult for cannabis-related firms to get banking services. Many continue to deal in cash or pay hefty fees for accounts.

The banks that work with cannabis-related firms are mostly community institutions in states where the industry is legalized, and their service is limited to accepting cash deposits.

Cannabis investment is still dominated by wealthy individuals, but that is changing as the industry grows, attracting venture capitalist and equity investors who until recently were reluctant to finance cannabis firms.

They are drawn by a wide-open landscape of opportunity, said Eric Hippeau, managing partner at Lerer Hippeau Ventures, a New York-based venture capital firm well-known for its investments in high-profile media startups such as Twitter Inc and Buzzfeed.

“It’s an industry that is starting from scratch with no infrastructure,” Hippeau said. “There are many promising cannabis-related software startups that are able to easily raise money.”

Some of these startups provide seed-to-sale cannabis tracking system software and inventory management. Hippeau Ventures earlier this year joined a $3 million funding round for LeafLink, a business-to-business platform that provides a market for dispensary owners to buy inventory.

“The stigma is slowly going away, and you are seeing some real talent, in terms of technology entrepreneurs and quality engineers,” said Kyle Lui, a principal at DCM Ventures.

Investors who have taken the initial plunge into the quasi-legal marketplace seem eager to take on more exposure, said Jim Patterson, CEO of Eaze, a three-year old company has raised $51.5 million in five rounds from more than a dozen investors.

Such firms believe its “a good time to double down,” Patterson said.

Some investors have steered toward technology and support services, which carry less legal risk than cultivating or selling the weed itself.

These include dating apps for cannabis users such as High There and My420Mate, as well as WeGrow, an educational app that teaches people how to grow cannabis. HelloMD is an online platform connecting doctors and cannabis patients.

Among the signs the market is maturing is the development of information services that collect data on trading of cannabis and publish guideline prices. Similar services are common across commodity markets – from oil and gas to corn and cotton – and are used by industry participants as price benchmarks.

Investors can also follow the value of marijuana firms through stock market indexes such as the Horizons Marijuana Life Sciences Index ETF, which tracks the performance of a selection of publicly listed cannabis companies in North America.

The value of the index is up about 70 percent over the last three months, thanks to star performers such as Canopy Growth Corp, a producer and retailer of medical cannabis products – up 112 percent for the year – and Aphria Inc, a cannabis producer, up 132 percent this year. “The cannabis business is really about risk arbitrage. There are chances of a higher return because the risk is high,” Patterson said. “Investors get that.”

The long-term risk may be lower, however, as a growing number of Americans express support for marijuana legalization and the industry creates jobs and tax revenues.

“The evolution or rollback of prohibition is inevitable,” he said. “It’s not like it stopped anyone from getting it.”