Venture capital firm investment in peer-to-peer technology continues to build strength, according to a recent VentureTrends report by VentureDeal.

While the term “peer-to-peer” first hit the scene during the first dot-com boom and was associated with file-sharing sites like Napster and Kazaa, today’s peer-to-peer companies focus on making connections between individuals for a wide variety of purposes: Selling goods, finding a place to stay, exchanging advice or lending money. It’s part of a multi-industry trend towards more democratic ways of managing markets, where transactions and ideas are crowdsourced instead of going through a central hub or a small group of experts.

VCs are continuing to support peer-oriented companies, whose overall reach extends across a number of sectors. An initial public offering remains unlikely in the near future due to the relative immaturity of new entrants, with the possible exception of room rental marketplace Airbnb. Still, venture investors should be able to expect interesting M&A exits.

2006 – 2007: A number of companies received funding for their applications, which were designed to enable “peer-to-peer” collaboration with online tools. An early entrant was handmade goods marketplace Etsy, which received $1.6 million in seed funding from Union Square Ventures. Another company was Inigral, a San Francisco-based company intent on developing software for the educational sector. It received $580,000 in Series A funding from the Founders Fund for its software that enables collaboration between students, their peers and instructors. The company has since received another $6.5 million in follow-on funding.

SocialPicks, a “community where stock investors exchange ideas and track performance of financial bloggers,” raised half a million dollars from Bay Partners in its first round of funding. The company was later acquired by stock market data and syndication tools provider FinancialContent.

2010: Room-rental marketplace Airbnb exploded onto the scene with its peer-to-peer marketplace aimed at the global accommodations marketplace. The company closed a $7.2 million series A round in 2010 and followed it with a $112 million series B funding in 2011 and is backed by a syndicate of top-tier venture capital firms and international investor DST Global.

Today: A current trend is veering toward peer-to-peer financial services, such as money transfer and lending platforms sites like peerTransfer and SoMoLend. This is in part due to users becoming increasingly comfortable with conducting business online and the success of crowdsourced microfinance sites like Kiva and Kickstarter. peerTransfer calls itself the “pioneering low-cost online international money transfer and global payments” company. SoMoLend is developing a peer-to-peer lending platform for small businesses and was seeded with $310,000 by Cincinnati, Ohio-based public-private group CincyTech. 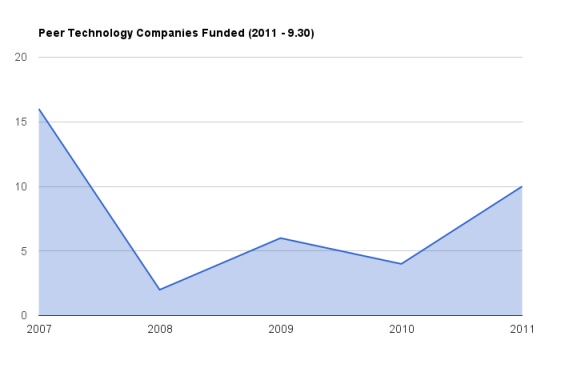 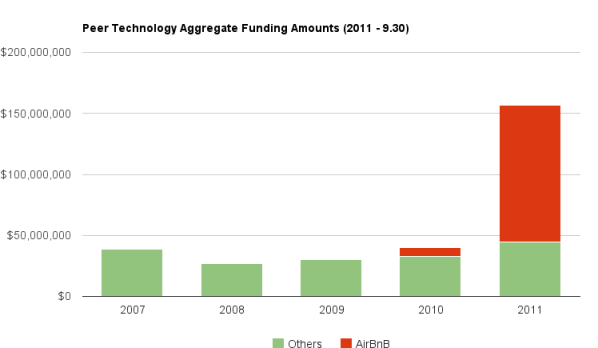 Excluding Airbnb, aggregate funding amounts in the subsector have been relatively stable over the last five year period, with 2011 showing a material uptick. 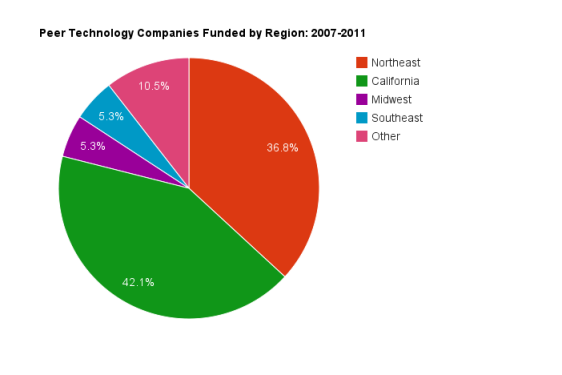 This investment has a strong regional flavor: The California and the Northeast regions have accounted for nearly 80 percent of peer-focused technology fundings over the past five years.

As part of the larger consumer web spectrum, peer-to-peer applications are in high demand. The near future will no doubt see expansion of peer-to-peer models to other industry verticals. For example, consumers can now rent out their own parking spots at Park at My House. With social media becoming embedded into most avenues of the user experience, peer-focused technology companies can leverage social network access to drive user adoption rates.

Whether or not they can develop significant IPO offerings remains to be seen, but depending on market traction and strategic importance to acquirers, M&A exits seem the most likely outcome for smaller niche-market oriented companies.