The capital being invested in VC-backed startups is gradually decreasing — something the National Venture Capital Association (NVCA) and PitchBook describe as a return to normalcy in their report, which was released today. 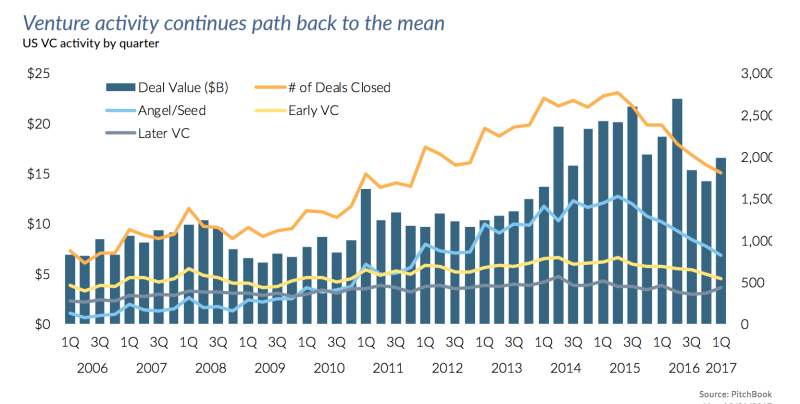 “It’s easy to look at the numbers and assume the industry is starting to lose its footing, but we don’t think that’s the case,” said John Gabbert, founder and CEO of PitchBook, in the report. “We see this as investors and entrepreneurs returning to a more disciplined approach to investing. Both parties are having to exercise more caution in the market and conduct the necessary due diligence to pencil out fair deals on both sides.”

Angel and seed-stage startups took the biggest hit, with just 827 deals completed in Q1 of 2017, down from 1,223 deals in Q1 of 2016. Investments in software and life sciences accounted for the majority of deal activity, according to the report.

And while startups in 46 states received VC funding, California-based companies took home the biggest chunk this quarter. In all, 560 companies received $8.3 billion, 50 percent of the total capital invested across the U.S. 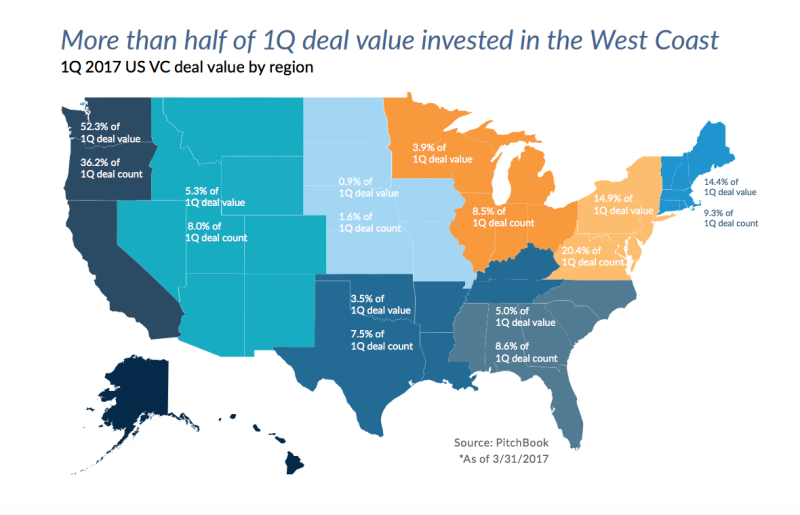 Another sign of normalcy: less capital raised by venture firms in Q1. VCs raised $7.9 billion across 58 funds, down roughly 24 percent from the capital raised in Q1 of last year. “A major contributing factor to the decline in fundraising totals in the first quarter was the absence of mega-funds raised,” the report said.

The majority of new VC funds in Q1 were for less than $250 million. Mithril Capital and Spark Capital were the only two firms that raised funds north of $500 million — $850 million for Mithril and $612.8 million for Spark. Venrock, Lux Capital, and Versant Ventures all raised $400 to $450 million funds.

Among angel and seed investors, 500 Startups, Techstars, Elevate Ventures, First Round Capital, and SOSV closed the most deals. 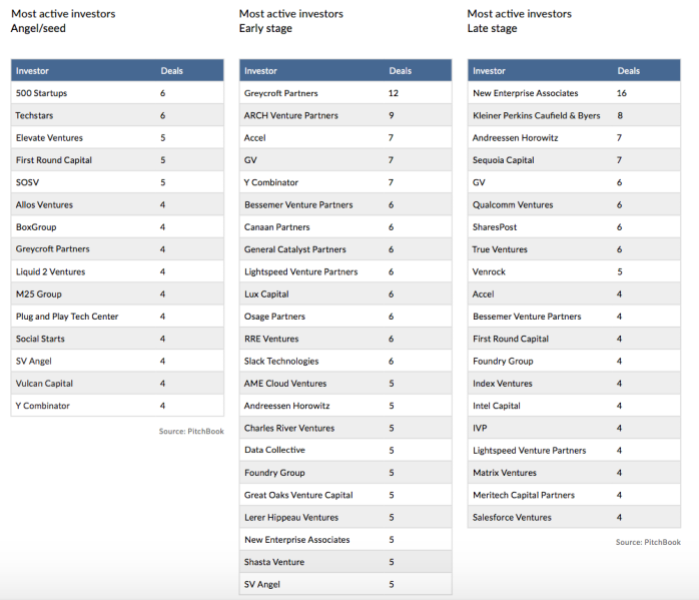 Exits: are IPOs the way to go?

With Alteryx, MuleSoft, and Snap going public in Q1, exits may have seemed to pick up compared to 2016 — but that wasn’t really the case. With only 169 VC-backed companies exited in Q1 of this year, compared to 220 in Q1 of 2016, the pace has decelerated. On the bright side, the median IPO capital raise was $104 million, the highest figure in 12 years, the report claimed.

Corporate acquisitions remained the most popular exit routes for venture-backed companies, with 132 deals completed in Q1. Notable deals included Cisco’s purchase of AppDynamics for $3.7 billion. However, the median deal size was only $40 million, less than half of Q1 2016’s $86.3 million.

Overall, software, biotech, and commercial services accounted for 73 percent of total exits, according to the report.

“After seeing large pools of capital raised in recent quarters, venture investors will continue to have dry powder to deploy to the entrepreneurial ecosystem, albeit with a more disciplined approach,” said Bobby Franklin, president and CEO of NVCA, in the report. “Combined with a positive outlook for a strengthening IPO environment for venture-backed companies, there is much to be optimistic about in 2017.”