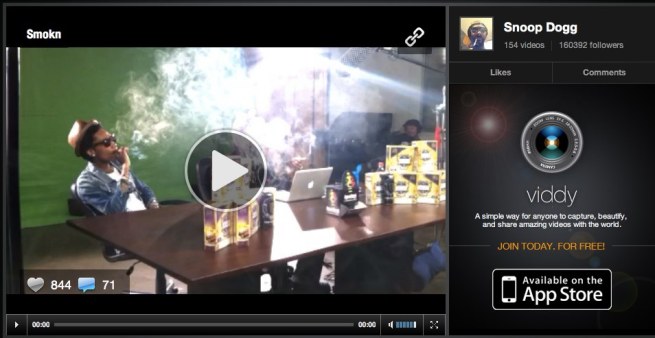 If you’ve taken a two-month hiatus from the Internet, then you’ve most certainly missed Viddy’s overnight comeuppance. The one-year-old company makes an iPhone-only application for shooting 15-second clips that can be enhanced through video effects called “production packs.” In just over two weeks, Viddy has rocketed from 10 million registered users to more than 27 million and is adding 500,000 new folks to the fold each day.

Today’s announcement confirms whispers that were circulating about a looming round. The startup wouldn’t go on the record with a valuation, but earlier reports pegged its post-money valuation at between $300 million and $370 million.

“We have a big vision, big ambitions,” O’Brien said of the company’s big round, which only trails its first $6 million round by three months. “And to accomplish … those things more quickly, and manage growth, it made sense to take on additional partners.”

Additional partners is right. Viddy, basking in the limelight, has attracted a “who’s who” list of celebrity and technology investors, partners, and members. Biz Stone, Shakira, Will Smith, and Jay-Z are all backing the company in some form. And on the user front, A-listers such as Rihanna, Snoop Dogg, Katie Couric, and Mark Zuckerberg are all Viddy-ographers.

“Personal video sharing is clearly an enormous opportunity and we think Viddy is positioned to be the breakaway leader,” NEA general partner Pete Sonsini said in a statement to VentureBeat. “Viddy has tremendous momentum and a growing, engaged community generating original content, a major differentiator, and we’re excited to partner with the Viddy team.”

O’Brien spoke of the proliferation of smartphones, continual enhancements to mobile phone cameras, and the rise of 4G networks as converging factors helping Viddy succeed. He said the startup’s almost unbelievable user growth is due to four factors: a great product, celebrity users, integration with Facebook, and constant placement atop Apple’s App Store charts. Of course, he added, it doesn’t hurt that people already know Instagram, which makes the Viddy experience feel familiar to new users.

“Our goal is to entertain and connect people around the world through mobile,” he said. “There’s an extraordinary opportunity for us to … enable consumers to take videos worth sharing.”

With video-shooting and sharing still restricted to iPhone users, the company believes its rapid growth is sustainable as it moves to other platforms. Viddy, O’Brien said, has a working prototype of an Android release, though he isn’t ready to discuss launch timing.

As noted above, Viddy’s service and success closely parallels that of Instagram, which was snatched up by Facebook’s Zuckerberg for about a $1 billion in cash and stock shortly after hitting 30 million users and launching on Android. Will Viddy follow in Instagram’s footsteps here too? Nope, not happening, O’Brien said.

“So you wouldn’t sell to Facebook if Zuck offered you a $1 billion?,” I countered.

“That’s not what we’re interested in right now,” O’Brien said. “We’d just like to stay focused and continue to execute.”