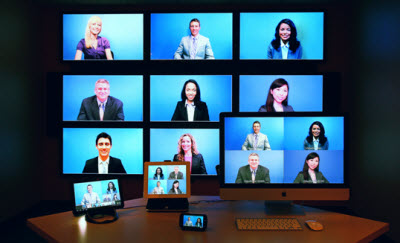 Vidyo has raised $22.5 million in a fourth round of funding for its high-quality video conferencing. The company plans to use the money to expand its sales worldwide and develop better, more immersive and inexpensive “telepresence” technologies.

The company is hopping on the trend for telecommuting and the need to reduce travel expenses at companies, without losing the personal touch of in-person communications. It allows people to have meetings with groups of people who can all be using different video connections, such as an immersive “telepresence room,” a desktop computer, an iPad, or an Android mobile phone.

Vidyo has built an infrastructure that can handle all of those devices in the same video conference call, said Ofer Shapiro, chief executive of Vidyo. And it does so at prices that are a fraction of the cost of corporate video conferencing systems. The system could help disrupt existing telepresence rooms that make it seem like you’re in the same room with the person you’re talking to. Companies have bought those systems in order to save on the costs, hassles and risks that come with airline travel.

Hackensack, N.J.-based Vidyo has now raised $97 million since its founding in 2005. Vidyo has 9 patents and 27 pending applications for its VidyoRouter platform. In June, Shapiro showed me how nine people could use the system at once with crystal clear voice and picture quality. The video runs at 60 frames per second in the 1080p HD video format. And users can log into a wide variety of platforms, including 1080p HD 60 frames per second multi-screen telepresence rooms, video conferencing rooms, desktops, iOS and Android-based smartphones and tablets, (including the iPhone, iPad 2, Xoom, Galaxy, Nexus S and others). The goal is to get it to work with 20 or more screens in the future.

Vidyo says it can lower costs because its solution uses less bandwidth than other systems, so it can deliver HD video over ordinary broadband connections. The company foresees customers using it for supply chain management, command centers for disaster recovery or military uses, patient monitoring, distance learning, financial services apps and others.

Tim Krongard, a partner at QuestMark Partners, said that video conferencing will undergo exponential market growth in the next five years and new market leaders will emerge. He will join Vidyo’s board.

The funding was led by QuestMark Partners and it included existing investors Menlo Ventures, Rho Ventures, Star Ventures and Four Rivers Group. Vidyo has more than 150 employees. Vidyo’s partners include Google, Hewlett-Packard, Teliris, and Ricoh. Rivals include Microsoft-Skype and Cisco.