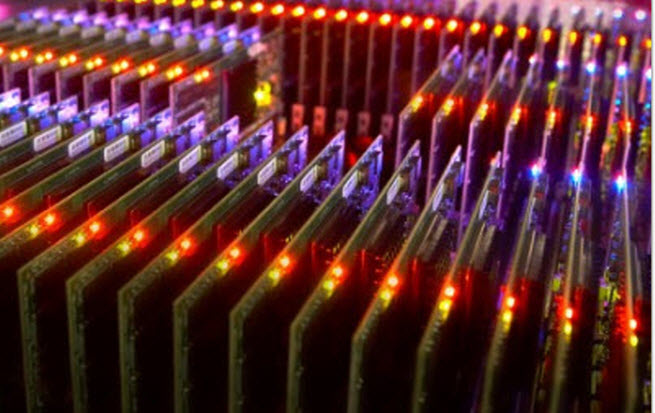 Flash memory is hot because it runs cooler than other kinds of storage in the data center. It’s also faster and more efficient at storing frequently used data. Violin Memory is one of the companies that is benefiting from this trend in the data center.

And the trend has helped Violin boost its latest funding round from $50 million to $80 million, according to AllThingsD. Previously, Mountain View, Calif.-based Violin had raised a fourth round at an $800 million valuation. Investors in that deal included Toshiba, Juniper Networks, SAP VEntures, and Highland Capital.

But the round was oversubscribed and it reached $80 million, with the addition of new investors GE Capital Management. Violin chief executive Don Basile said that the funding is the latest step toward an initial public offering. Four banks are involved in that: J.P. Morgan, Deutsche Bank, Bank of America Merrill-Lynch, and Barclay’s. The IPO could happen by Oct. 27.

Violin Memory makes flash memory arrays like the one pictured above. Those are used as primary storage for servers in enterprise data centers. The arrays replace slower disk drives.

The main storage for data in servers has traditionally been the hard-disk drive. Flash memory devices — which are solid-state semiconductor chips — have been much faster than the spinning magnetic disks. But the reliability and the storage density used to be too low for flash memory. Improvements on that front have enabled flash to be used as primary data storage. Violin says it can improve the performance of Oracle databases by ten times. The addressable market of hard drive arrays is $20 billion, as measured by Gartner. That market is vulnerable to replacement by smaller servers with incredible amounts of input-output performance, Basile told VentureBeat.

Customers include AOL, Revlon, Tagged.com, Juniper, and Hewlett-Packard. Violin has now raised $182 million since a recapitalization in 2009. The company was founded in 2005, launched its first memory arrays in 2009, and has since deployed multiple product generations using RAID protection for reliability. In June 2010, Violin acquired Gear6.

Fusion-io does server caching, but direct rivals include makers of arrays of hard disks. Those direct rivals include EMC, Network Appliance, IBM, Hitachi, and Dell. There are perhaps dozens of startups trying to do flash array. The company has grown from 100 employees a year ago to more than 320.