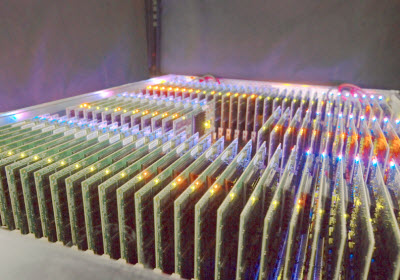 The third round of funding values Violin Memory at $440 million. It shows that providing power-efficient memory systems to data centers is still a growth business as a tsunami of internet traffic puts more and more pressure on the servers that serve web pages in corporate data centers.

The deal comes on the heels of the company’s second $35 million round raised in February. The Mountain View, Calif.-based company says the new funding will help the company surpass $100 million in revenue growth this year.

Violin Memory makes “scalable memory arrays” such as the one shown in the picture where lots of fast flash memory chips are used to access frequently used data in servers. The chips reduce the load on servers and thereby save a lot of energy.

The company competes with other companies that are seeing significant attention in the markets. Fusion-IO has a pending initial public offering; EMC is accelerating flash storage adoption. Violin Memory’s chief executive, Don Basile, said Violin is planning on becoming a billion-dollar company and wants to be the fastest-growing storage company of the decade. Basile was formerly CEO of Fusion-IO.

Some of the drivers of increased demand for flash memory arrays include the growth of 4G, mobile apps, social commerce, cloud computing and the growth in web traffic. The result is like a 100-year-flood of demand for data storage and processing, said Joseph Unsworth, research director at market analyst firm Gartner. Enterprise flash memory will likely be a $4.2 billion opportunity in 2015, Gartner says.

Violin Memory’s arrays were recently used by Hewlett-Packard to set a new transaction processing record with its servers. Those servers, in turn, are transforming the data centers for companies like AOL, Perforce and Microsoft.

Violin Memory was founded in 2005.