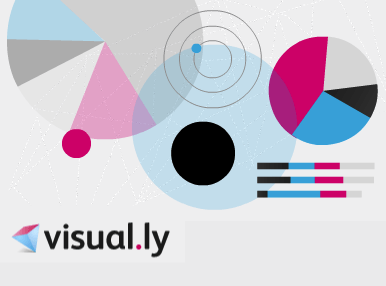 Infographics startup Visual.ly has raised a new $2 million round of funding, the company announced today.

Visual.ly is building a service that will allow people to create beautiful, custom infographics using information from various databases and APIs. The service will be automated, which means users only need to specify the kind of information they want to visually display to produce an infographic. The company produced an example of what the service can do with its Twitter Visualization Project in July.

With the rising demand for timely, relevant infographics among news publications and communications organizations, Visual.ly is filling a need in the marketplace. Right now, most organizations that produce quality infographics have to hire out a designer and dedicate resources to gathering information — a process that can be both costly and time intensive.

“There are no tools for this type of thing. People are either creating really bad-looking visuals using Microsoft Applications [such as the native Windows app MS Paint] or they’re hiring a graphic designer, which takes time and money — it’s a hassle,” Visual.ly co-founder and CEO Stew Langille told VentureBeat. “So, we’re trying to create a tool that we can license out to the industry.”

Langille, who previously worked at money blog Mint.com, said Visual.ly’s service is trying to help digital news media outlets evolve in the same way that Gannett-owned USA Today’s visually stimulating weather infographics did in the early ’90s and the way Wired’s innovative graphic design did just under a decade later.

Visual.ly’s new round of funding was led by Crosslink Capital, SoftTech and 500 Startups, with participation from Kapor Capital, Giza Ventures, Naval Ravikant, Mark Goines, Josh James and others. The startup intends to use the additional capital to grow its development team and hire additional data visualization specialists.

The startup already has several partnerships for the Alpha release of its service. Visual.ly has produced infographics for several of its media company partners, such as The Atlantic, BuzzFeed, AskMen, CNNMoney, The Economist, NASDAQ, National Geographic and the Wall Street Journal.

Over 26,000 companies signed up for Visual.ly’s beta testing, which is tentatively scheduled go public in late December. But if that isn’t enough to gauge the high level of interest from people, the company also revealed that it has created over 300,000 infographics, doubled the index of infographics hosted on its website and has more than a million monthly page views.

Check out a demo of the service embedded below.