Wanova, a startup that makes it easy for enterprises to manage a fleet of PCs, has raised $10 million in a second round of funding.

San Jose, Calif.-based Wanova has created the Wanova Mirage software that combines several different technologies to make it far easier for companies to keep their computers updated, backed up, and free of nasty viruses. Thin clients, where the computing is handled in servers, can also achieve this kind of result. But Wanova enables employees to hang on to their full-fledged PCs and still take advantage of their full computing power, without the disadvantages of thin clients. With its design, Wanova says it can give users and companies the best of all worlds: low computing costs, easy management, and powerful computers for employees to use. The company calls this solution a “desktop as a service.”

“We had a vision of where overall desktop virtualization was going to go,” said Sebatiano Tevarotto (pictured right), chief executive of Wanova, in an interview. “We run the desktop in the cloud as a service. That gives you all of the advantages of the cloud infrastructure while leaving the experience of the end user unchanged.”

Wanova’s sales have tripled in the current year. Other companies such as Wyse have created easy-to-manage corporate computers with such characters through “thin client” computing, where much of the computing is done in the internet-connected servers. The user’s own machine does very little computing and merely displays what the server has computed. The problem with thin clients is that they can’t be used without an internet connection, and the clients (generally) aren’t powerful enough to run applications such as high-definition video.

With Mirage, a company installs a small two-megabyte software program on the employee’s laptop or desktop. It adds a software layer known as virtualization.

“The layering is one of our secret sauces,” said Barry Phillips, Wanova chief marketing officer and vice president of sales, in an interview. “Because we let the user take advantage of all of the local computing horsepower, you don’t get a user revolt.”

The computer uploads an image — a collection of all of the files, programs, drivers, personal data and operating system settings on the computer — to the company’s data center. The company compresses the data and removes duplicate programs from the data center’s copy of the computer’s contents. This is called “de-duplication” and it vastly reduces the storage requirements for a whole fleet of computers. It means the amount of data stored in the data center is fairly small.

The user can do work on his or her own PC. Every hour or so, the changes are uploaded to the computer, so the data center always has a backup of the employee’s data. If the computer is lost or stolen, it can be restored from the image in the data center.

Because the employee is using a normal desktop PC, its performance won’t be throttled by the speed of an internet connection in the same way that a thin client can be. And the employee can work while offline.

With a thin client, if a user travels to a place where there is weak internet connectivity, then the thin client won’t work. By contrast, a Wanova-based computer will function normally running corporate applications.

If the user wants to access files via a BlackBerry, a Mac or an iPad, they can do so.

Meanwhile, the simplified management enables companies to vastly reduce their total cost of ownership for a whole fleet of computers. When the company changes software or does an update, the system administrators no longer face the nightmare of individually updating all of the computers. Rather, they just make a change to the centralized image, which is then applied to all of the PCs. Upgrading a whole fleet of computers to a new operating system can take a very short time.

Restoring a backed-up image can happen within a matter of minutes. The company can keep images of your data going back as far as 11 months if needed. That’s particularly useful if a computer gets hit with a virus. That means that tasks that now take hours or days can now be done automatically, shaving back management costs. If a company wants to maintain different images for sales people or engineers, it can do so.

Wanova was founded in 2010 and it launched its first Mirage service in May of last year. Then it launched Mirage 2.0 in January. Tevarotto said the company’s product attacks the market of 50 million to 60 million thin clients out there.

The investors in today’s round include Greylock Partners, Carmel Ventures and Opus Capital. Tevarotto said the company would use the money to expand its sales and marketing efforts and to fund future products, Tevarotto said.

“Our plan for this money is to accelerate our push into the market,” he said.

Wanova has 48 employees and a development center in Netanya, Israel. Rivals include Citrix XenDesktop; Microsoft Remote Desktop Services; VMware View, and Moka Five. Some of the rivals use virtualization technology and client-based hypervisors. But Wanova says it gets around some of the limitations of those kinds of solutions. The hypervisors don’t necessarily offer an easy user experience. 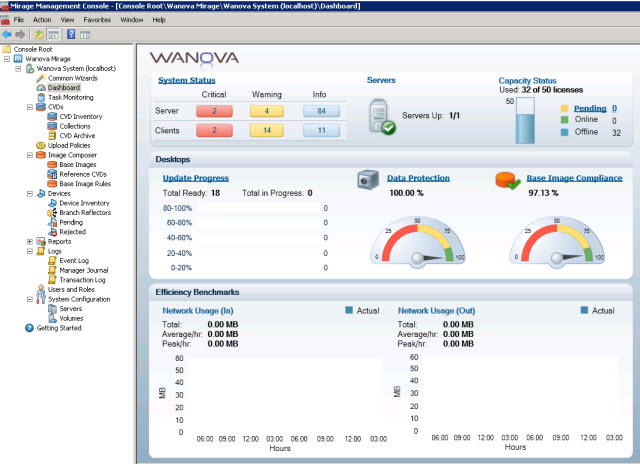