Watsi has already made history as the first nonprofit to receive financial backing from Silicon Valley’s elite accelerator Y Combinator.

And today, it is among the first charitable organizations to raise a traditional ’round’ from angel investors. Watsi received donations, and didn’t exchange equity. But in all other respects, the company received funding in an identical manner to its peers at Y Combinator and other tech accelerator programs.

Watsi’s founder Chase Adam suggests that the process should be called a “philanthropic seed round,” and is a viable model for other fledgling nonprofits.

Watsi helps impoverished people pay their medical bills through small donations. Potential donors can view profiles online — primarily young children — to inspire a personal connection, and can give as little as $5. 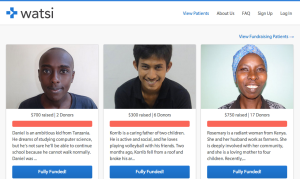 Above: Watsi provides loans to people who need medical help

Adam was inspired to start the company back in 2010 when he was working as a Peace Corps volunteer. He recalls passing through a town in Costa Rica called Watsi. A woman in tattered clothing boarded a bus and asked for donations for her son’s medical treatment.

Adam hit on the idea that a website and crowdfunding model could help people in need. He recruited a few developers to help him build a basic website. The key differentiation from other charities is that 100 percent of the donations directly fund medical treatments, and there are no administrative costs.

This funding round should keep Watsi’s website up and running for a matter of years. Adam told me he wanted to avoid the traditional fundraising process — most small charities make a major push for donations every months.

“This is one of the things that frustrated me most about the nonprofit sector,” said Adam. “Half the team is focused on fundraising and development — and the other half on events.” This doesn’t leave much time and resources to build the product, and provide services to people in the developing world.

Adam suggested that other nonprofits should borrow from startups and raise a more traditional round. He said that many Silicon Valley investors are open to the idea of funding a philanthropic entity, and some will even take a seat on the board.

Shortly after Adam launched the site, Watsi caught the eye of Y Combinator’s outspoken founder Paul Graham, who posted about its “revolutionary potential” in discussion thread. The nonprofit was subsequently invited to apply for Y Combinator by Graham, and was accepted.