FeeX wants to use the power of the crowd to keep banks honest.

The startup has built a platform for crowdsourcing financial intelligence. Today it announced closing funding of $3 million led by Blumberg Capital.

FeeX’s CEO Yoav Zurel said the goal is to be the “Robin Hood of fees.” The site analyzes financial data from the community and compares the amount that you pay in fees. It gives you a score on its “sucker meter” to let you know how much you are overpaying and to provide greater insight into how much you should be paying.

“When it comes to financial information, financial organizations know everything, and we know nothing,” Zurel said in an interview with VentureBeat. “We estimate that Americans are paying more than $500 billion a year in financial services fees. Fees are eating up people’s savings or retirement fees, and they have no idea.”

FeeX looked at reports from the FDIC, AARP, U.S. Census Bureau, the Federal Reserve, and others to figure out just how much money people waste on fees. The team found that over $150,000 is spent over the course of a career on 401K fees, and seven out of 10 Americans think their 401K plan is free. To address this, they built an engine that connects to your bank account and it will position your financial information against people with comparable financial situations. If you realize that you are paying more than your peers, this information can be used to change plans or negotiate with providers.

Zurel said that there is a “culture of silence” surrounding finances. People are reluctant to discuss their 401K plans with friends and family or seek out help from people who aren’t financial professionals. However, this opacity means information isn’t open enough to protect consumers.

“The crowd can fight back,” Zurel said. “This is a community problem with a community solution. We want to increase transparency and break market asymmetry so individuals don’t have to be keep in the dark. People are waking up and realizing they can rely on the wisdom of the crowd and can yield better results than acting alone.”

The financial industry is going under significant transformation right now. The 2007-’08 financial crisis led the American public to question the trustworthiness and stability of banks and initiated a call for greater transparency. Entrepreneurs have jumped on this demand and are building a products that give some of the power back to consumers. Ribbit Capital is a new $100 million fund dedicated exclusively to financial tech.

“Banks have proven to be difficult environments for innovation to flourish, resulting in an antiquated financial services industry that remains relatively untouched by the technology-driven evolution transforming other markets ranging from social media sharing to professional enterprise services,” said Ribbit Capital founder Meyer “Micky” Malka. “The technology to unlock this innovation is in place, and there are entrepreneurs around the world with groundbreaking ideas that have the potential to turn this industry on its head. What’s lacking is the investment, will and expertise to develop and make them reality.”

Whether its through alternative loan models, like LendingClub, Bitcoin exchanges like Coinbase, or personal financial management solutions like CreditKarma, mistrust in traditional financial institutions and technology are working in concert to break down the barriers between them and their customers.

Like Waze, FeeX launched its pilot in Israel a few months ago and claims to have saved people over $2 million already. Zurel said deploying the platform in Israel helped the company learn about user behavior and perceptions, and these insights will inform its U.S. release, which should happen in a month or two. The company will use this financing to set up offices in New York City and add in more categories of fees.

Check out this infographic from FeeX below: 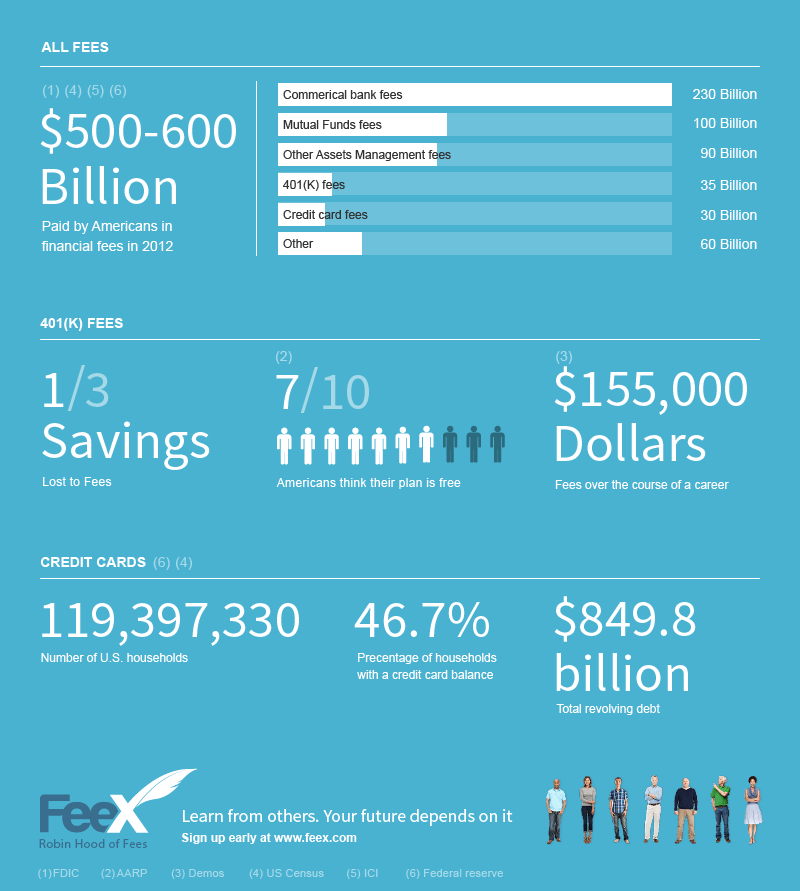