If you’re a founder or a fellow VC, you may be asking yourself, “Are VCs really open for business?” As a notoriously networked industry, startups and VCs have not been spared the challenges of going remote. VC-founder relationships are often multi-year endeavors, and getting the relationship wrong can have high stakes for both parties. While many of us in the VC world have come to the realization that a big portion of our jobs can be done remotely — including pitches, diligence, networking and events — difficulties continue to arise in fostering new deep relationships over video, and understanding team and workplace dynamics.

In June 2020, three months into the pandemic, we set out to find out how VCs are operating in a remote world. We surveyed over 150 VC firms, spanning the US, Canada, the UK, and Europe. We also looked at different stages (pre-seed to growth) and investment styles (lead vs. follow). The survey was completely anonymous and was sent directly to individual investors by members of our team. We set out to answer the following questions:

As we continue to grapple with COVID-19, it is likely that VCs will require some adaptation in the way we work for the foreseeable future. As such, we are sharing our findings to contribute to the collective learning in our industry and to help us all adapt to the “new normal.”

Here are some of our findings, consolidated across all geographies and deal stages. But keep scrolling down for more key findings. 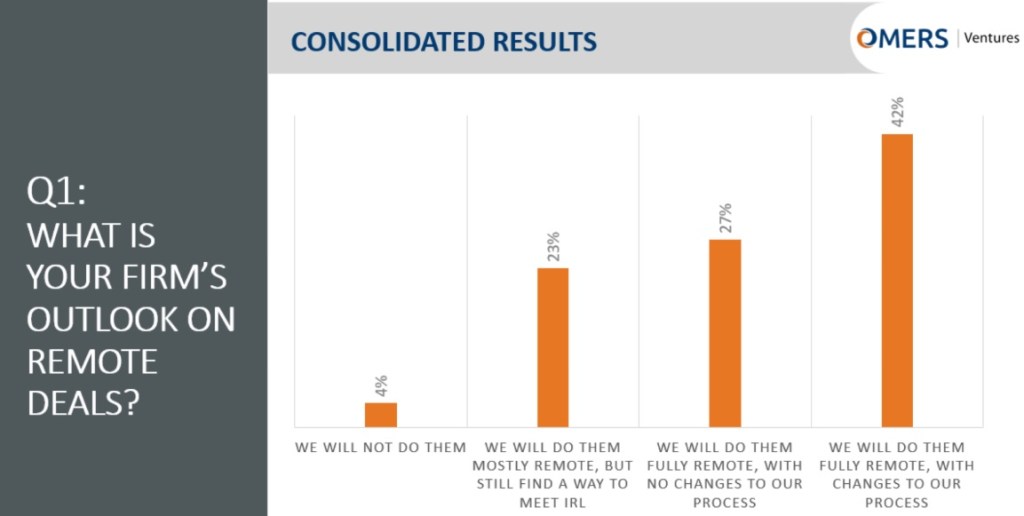 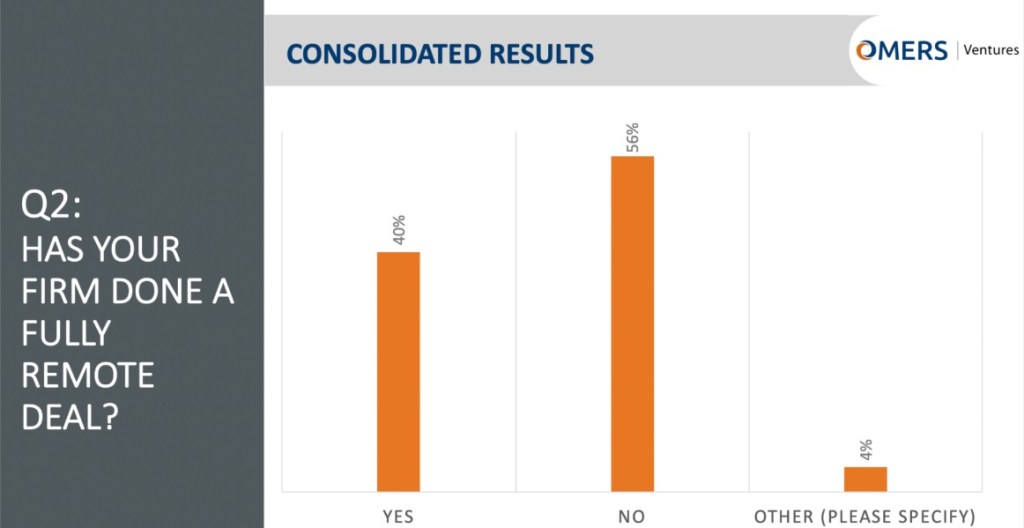 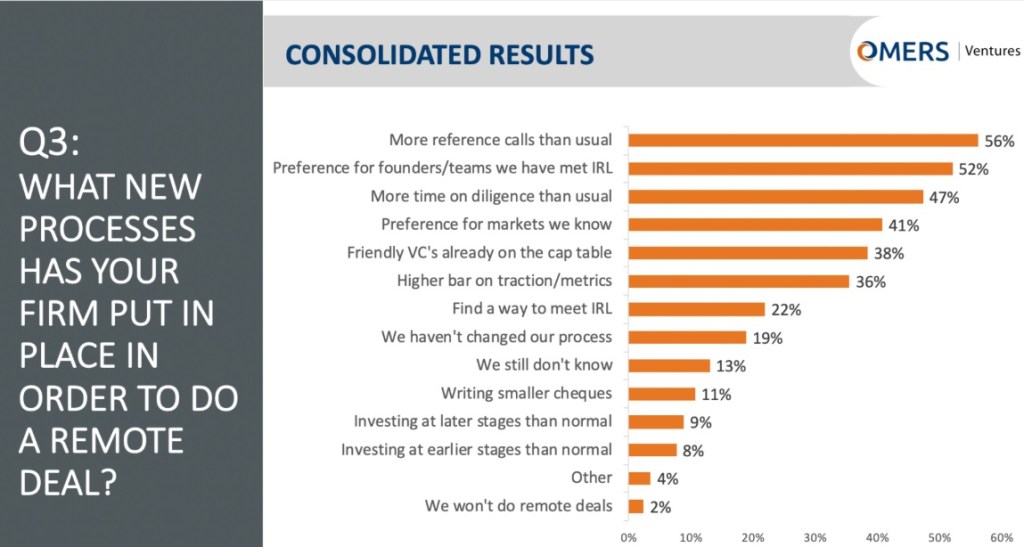 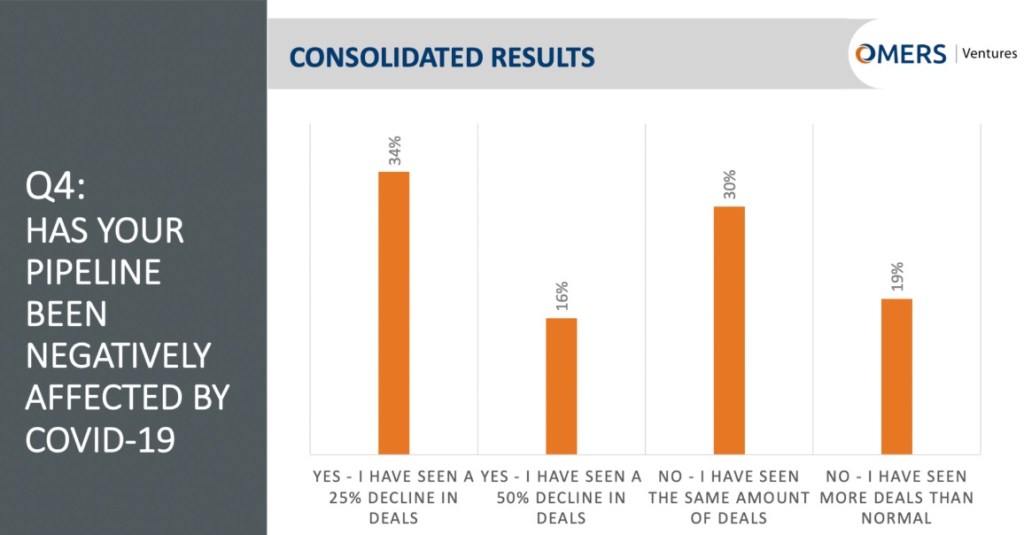 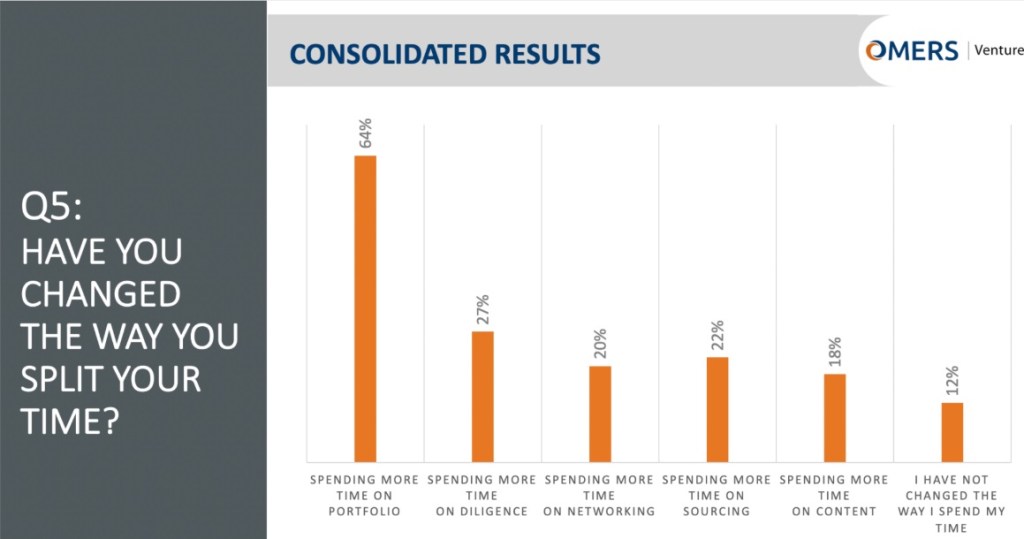 (You can find breakdowns for the above questions by stage, geography, and firm type here.)

Over the span of a full quarter, over 50% of VC firms did not do a remote deal. While this could suggest overall Q2 2020 VC funding would be dramatically lower than previous years, the data is likely to be messy. There was inevitably high deal activity relating to deals already in progress prior to COVID-19, follow-on financings in portfolio companies, unannounced deals, or financings in companies that firms have previously met in person. Given the time lag from initial discussion to deal being done, we will look to Q3 and Q4 as the real indicator of the impact of lockdown.

Many VCs are still trying to figure out what a remote deal will look like for them — but it seems like most are looking for familiarity. It was surprising that VCs haven’t reported changing their investment strategies as much as we would have thought, such as writing smaller checks, and investing at different stages, but instead are focusing on supplementing their remote diligence with their network from pre-COVID. The data suggests that most VCs are opting to favor companies they have previously met in person, doing more reference calls, and having friendly VCs already on the cap table.

We were surprised to see that more than 20% of firms have reported an increase in deal activity. But most of these VCs are follow firms, indicating that rounds may be having difficulty closing/filling the subscription amount.

The fact that the majority of VCs reported some level of decline in deal flow (between 25–50%) would suggest there is a dwindling supply of companies formally going to market — as many companies opted to extend runway, bridge to their next financing, or approach VCs where they have an existing relationship.

Overall, VCs are spending their time differently. Diligence is likely to take longer, as most firms have implemented three or more processes in order to do remote deals. “Portfolio triage” is far from over; VCs are unanimously spending more time on portfolio companies, especially at later stages.

Other interesting takeaways include:

Note: We classed early-stage firms as Pre-seed, Seed and Series A, while later-stage firms are Series B, C, and D+. Alyssa Spagnolo is an Associate at OMERS Ventures.