The recent legalization of recreational marijuana in California and other states now totals to 45 states that have legalized some form of marijuana. However, the federal government has never endorsed even medical marijuana. The Obama administration created rules known as the Cole memo where they decided not to enforce federal marijuana laws if states legalized it. Recently, Attorney General Jeff Sessions reversed this course and stated that marijuana laws would be enforced.

A raft of startups are operating in this tenuous legal gray area, including Eaze, Baker, and Pax Labs. Much like Uber and Lyft flouted taxi commission regulations, these startups are betting that public sentiment and user traction will overcome the existing legal and regulatory environment. Indeed, all of the state legalization efforts were passed by millennial-driven voter ballot initiatives in both red and blue states rather than by entrenched legislators. The citizens want their cannabis, just like they wanted their Uber.

Name brand Silicon Valley investors have been much more reticent to jump into the fray, which is understandable given the legal uncertainty. The void is being filled by seed investors like Snoop Dogg, AngelList cannabis syndicates, smaller institutional investors like The Arcview Group, and foreign firms like Merida.

The big question is, why is there such government resistance to legalizing marijuana? The answer is quite simple, and actually quite similar to the reason for the resistance to ride sharing. Just as the taxi commission and taxi companies were protecting the $3 billion taxi market, the war on drugs is a $76 billion annual business that decidedly does not want to be disrupted. 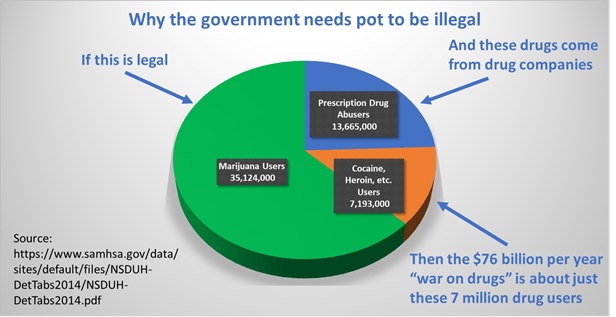 The government can credibly spend $76 billion a year on a very big problem with 44 million criminals. If marijuana is decriminalized, that subtracts 35 million people from the user count. It’s also hard to justify a war against the 15 million prescription drug abusers in the United States, because the drugs come from large pharmaceutical companies, not across the border from drug cartels.

Without marijuana users and prescription drug abusers, the annual $76 billion war on drugs becomes about just the seven million serious drug abusers who are consuming cocaine, heroin, hallucinogens, and other hard core drugs. That’s just not enough people to justify the huge investment and would constitute an incredibly excessive spend of about $11,000 per user.

An array of businesses, citizens groups, and legislators from both sides of the political spectrum are aligning to attempt to convince the federal government to change its mind. Both cannabis startups and investors thought they had a clear quasi-legal path to success with state initiatives, but the recent about-turn in federal government policy is definitely going to put a pause on the nascent industry. Disrupting the government is never easy, especially when $76 billion per year of spend is at stake. From that perspective, Uber had it easy.

The author last smoked pot at the tender age of 18.

Peter Yared is founder and CTO of Sapho.