People often ask me, “Why did you move from San Francisco to, uh, Detroit?” The answer is easy. In 10 years, San Francisco will be as good as it is today, but Detroit will be a roaring city once again, defining a new technology hub at the intersection of steel and bits.

When choosing to move to Detroit, a city that has been in a recent state of rebuild, many do so to roll up their sleeves, get to work, and make a difference. These attributes are what’s needed in an entrepreneur, which makes the city’s vibe appealing to early stage startups.

And this is the reason I packed up and left San Francisco for Detroit in October of 2011. I wanted to take part in the emerging entrepreneurial gold rush in Detroit. I wanted to help fuel the startup renaissance and create a legacy. And over the last six years, I’ve seen the seeds of entrepreneurship blossom into a growing and thriving ecosystem. (Check out the documentary Generation Startup to see what it is like to build a startup in Detroit.)

Why is Detroit good for business?

The cost of living and doing business in Detroit is much lower than in coastal hubs like San Francisco and New York. You can hire a recent computer science graduate for $60K vs. $120K on the coasts. According to Numbeo, the cost of living in San Francisco is 93 percent higher than in Detroit. Your employees can afford a wonderful house in a great neighborhood, live in an amazing school district, and not break the bank. Not something you could do easily in San Francisco or New York. But across metro Detroit, you can. And that means more money to hire and scale your company. Your employees can raise a family and still live on an early stage startup salary. And your venture capital investors can see higher returns as a result of less capital needed to scale the business.

Detroit has a great talent network spanning universities, Fortune 500 companies, and business titans. Google got its seed funding as research out of the University of Michigan. A high percentage of the top venture capitalists in the United States have taken Professor David Brophy’s classes on venture capital. With 75 percent of the US automotive industry R&D investment located in Michigan, the future of self-driving cars will be built and tested across Detroit. New facilities like Mcity and the American Center for Mobility will support testing and validation of autonomous vehicles. And business titans that call Detroit home include Dan Gilbert, Roger Penske, Chris Ilitch, and Bill Ford.

There’s a hidden diamond in the Midwest that contains an economy larger than California. Chicago to Detroit, down through Cleveland to Pittsburgh, bending through Columbus to Cincinnati, and coming full circle through Indianapolis back to Chicago. 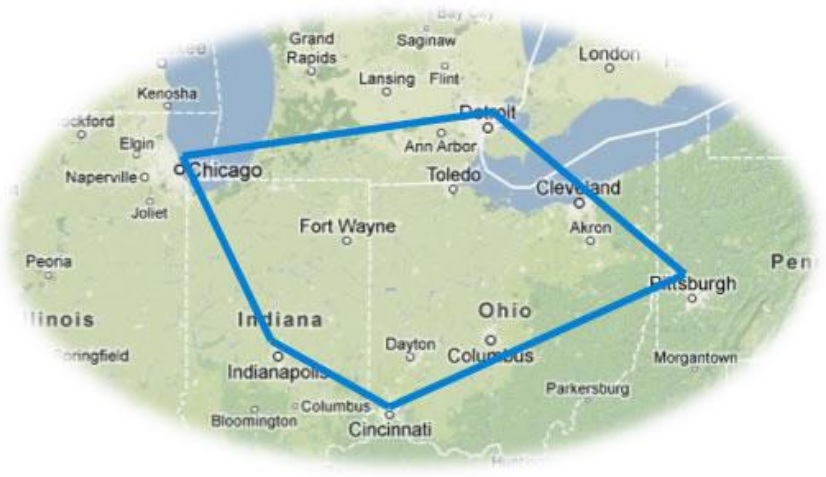 Image source: The Diamond in the Midwest

Within this map, there is a significant intersection of talent and business:

And if Drive Capital’s Chris Olson is right, in five years, the Midwest will have more startups than Silicon Valley.

What are Detroit startups focusing on?

Three years ago, Techstars Mobility launched in Detroit. Since then, we’ve seen many startups relocate or open up shop in Detroit to tap into the automotive dominance of the region. SPLT and Lunar, part of the 2015 class of Techstars Mobility, both relocated from NYC to Detroit. Together they now employ over 40 individuals in the city’s downtown. And Oblong, PolySync, and Mapbox all opened offices operating out of the Techstars office.

Higher growth startups include Rocket Fiber that provides gigabit internet and Shinola that is bringing back manufacturing to Detroit.

Where do startups tend to operate?

Midtown is the most welcoming to the startup community. With lower cost, incredible food and drink, and university access, this area has it all. Anchoring Midtown is Wayne State University, the third largest university in Michigan. Nearby is TechTown, a non-profit business accelerator, and Next Energy, one of the first research pavilions in the nation to offer access to a smart microgrid and a smart home. A few blocks away is Green Garage, a supportive, sustainable co-working space, which was formerly a showroom for Model T automobiles in the 1920s. Midtown is also where Techstars Mobility partnered with Foundry Group to provide a house for free to founders building their startups in Detroit.

On the rise is also Eastern Market, home to the United State’s largest open-air market. Lots of great lofts are occupied by a growing number of startups.

Where do entrepreneurs hangout?

Many founders are known to frequent Avalon International Breads, The Bottom Line Coffee House, Motor City Brewing, and the Jolly Pumpkin, all in Midtown.

If you’re looking to run into an investor or corporate exec, you might want to check out the Sugar House, home to the best cocktail in America, Selden Standard, a seasonal American restaurant, Chartreuse, voted best restaurant in Detroit, or Green Dot Stables, where everything on the menu is $3 (a personal favorite, where bills shock my coastal friends).

Detroit Startup Week, a week of free entrepreneurial-focused panels and networking events in May, is a great place to meet with people in the startup community. In fact, Lunar hired 2 people from the 2016 Detroit Startup Week. Also in May is the Michigan Growth Capital Symposium, which is heading into its 36th year, attracting 100s of investors and startups. Every fall is the annual Techstars Mobility Demo Day which draws 1000+ attendees as the largest single day startup event in Michigan.

Whether you decide to come to Detroit for 36 hours (great post on the NYTimes on doing so) or eventually call it home, the city and region is rapidly growing. New early stage startups are popping up at an increasing rate, music is flourishing in Detroit – Jack White just opened his new Third Man Records storefront in Midtown – and new restaurants, shops, and art are opening up every day (like Warby Parker, Bonobos, Nike, and Under Armour).

Building something in Detroit is building Detroit.

Special thanks to Hunter, Rohith, David, Chris, and Lisa for reviewing drafts of this article.