As Baltimore’s Ready Robotics was preparing to raise its first round of funding, the company faced a dilemma familiar to many tech entrepreneurs outside of Silicon Valley: Potential investors wanted to join the round on the condition that the startup move to Silicon Valley.

Ready Robotics ultimately decided to move after raising its round of funding — but not to the Bay Area.

In a phone conversation with VentureBeat, CEO Benjamin Gibbs revealed that the company closed a previously undisclosed $15 million first round in December and is in the process of moving its headquarters from Baltimore to Columbus, Ohio.

The round was led by Drive Capital, a venture capital firm that’s also based in Columbus and managed by former partners of Silicon Valley-based Sequoia Capital. Other participants in the round include RRE Ventures and Eniac Ventures.

Ready Robotics is a relatively new entrant in the field of robotics-as-a-service, or RaaS — connected robotic devices equipped with a cloud computing unit. Ready Robotics is a RaaS company that leases collaborative robots to manufacturers.

While it may seem as though every manufacturer is replacing human workers with robots, industrial robots still cost hundreds of thousands of dollars, leaving them out of reach for many small to mid-sized manufacturers. So RaaS startups like Ready Robotics that are targeting manufacturers are offering small, collaborative robots that can be leased for a period of time ranging from a few days to a year.

“Almost all of these RaaS companies are at a pretty embryonic stage of development, and a lot of them are going to fail in the next few years,” Rian Whitton, an analyst for ABI Research, told VentureBeat. Whitton noted that many of the companies ABI Research profiled in a recent report on the RaaS industry have fewer than 250 employees and have just raised a series A or seed round.

Ready Robotics’ competitors include San Francisco-based Kindred, but also Nashville-based Hirebotics, which also leases robots to manufacturers. Given that the Midwest and the South have served as historical centers of manufacturing in the U.S., it’s unsurprising to see two young RaaS startups shirk Silicon Valley for the middle of the country.

“Drive asked us to move [to Columbus], but that’s ultimately not the reason why we moved,” Gibbs told VentureBeat. “The Midwest is actually the fifth largest economy in the world if you broke it out from the U.S. And the amount of manufacturing and industrial automation that is going on there is just tremendous.”

The ‘Swiss army knife’ of robotics

Ready Robotics spun out of Johns Hopkins University in 2016 — Gibbs formerly worked as a tech transfer official for the university, while cofounder and CTO Kelleher Guerin completed his PhD there.

Gibbs calls the company’s flagship product the “Swiss army knife of industrial automation, as the Taskmate consists of a robotic arm attached to a mobile base so it can be wheeled around to different parts of the factory.

The arm can be outfitted with a variety of grippers, sensors, and pneumatic devices that are suited for a number of different tasks. In a video on Ready Robotics’ website, for example, a packaging company is shown programming the Taskmate to feed pieces of cardboard into a box maker.

Another thing that differentiates Ready Robotics from other RaaS companies on the market is its Forge operating system. The interface allows the operator to program the Taskmate to choose from a list of options that dictate how the machine should operate and move between tasks. This ensures that workers without coding experience can program the Taskmate. 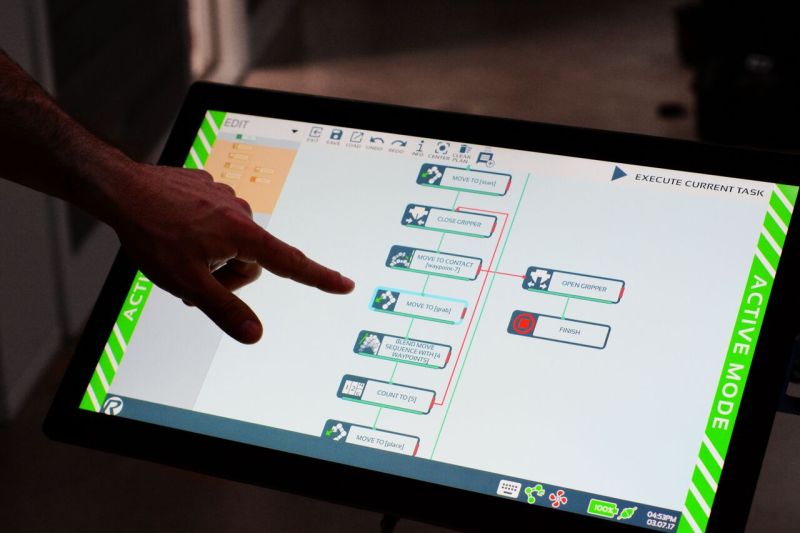 The Taskmate is available for manufacturers to lease for a minimum of three months, for a cost of between $2,000 and $4,000 per month.

While the Taskmate is designed for small to medium-sized manufacturers, Gibbs said the company has also seen interest from larger manufacturers. He said that Ready Robotics is targeting “any manufacturer that has a repetitive task that could benefit from automation, especially those that have flexible production environments with a lot of changeover.”

“[Factory workers] are constantly under time pressure, and they simply don’t have the weeks that it would take to traditionally set up an industrial robot. And what our system allows them to do is very quickly get a robot set up and running on a wide variety of tasks,” Gibbs explained.

Since launching the company’s initial iteration of the Taskmate in July 2017, Gibbs said that Ready Robotics has completed more than a dozen trial deployments. At least one of the companies it conducted a trial deployment with — Stanley Black and Decker — has become a paying customer, but Gibbs declined to say how many customers Ready Robotics currently has.

The company is also preparing to launch a new piece of hardware in the fourth quarter of this year — called the Taskmate Kit. The Taskmate Kit will allow the operator to program robots from multiple companies on the same interface. According to Ready Robotics’ website, the Taskmate Kit will be compatible with ABB, Fanuc, Universal Robots, and Yaskawa-Motoman.

Ready Robotics is also focused on its move to Columbus. The company purchased office space in February and is in the process of renovating and moving employees to the new headquarters. Ready Robotics will maintain a sales and marketing operation as well as some R&D in Baltimore. As of now, it has 30 employees.

“Columbus is a really well-kept secret in the Midwest, in that there are a large number of corporate headquarters there and there’s a tremendous number of innovative companies,” Gibbs told VentureBeat. “So it’s a great opportunity for a young company like us to go there and work with really forward-thinking companies that want to adopt and try out new technologies. And we know that if we can succeed there, we’re going to be able to succeed everywhere.”