Across a series of events this week, the French Tech ecosystem sought to deliver a clear message that France is eager to serve as a global home for entrepreneurs from around the world, even as other countries put up new barriers.

“France is an open, a deeply open country, and believes that the world can bring a lot to it, and that France can also contribute to the future of the world,” said President François Hollande at a startup event in Paris. “We believe that exchanges of goods, but above all of people and capital that can be invested effectively, are the keys to controlled globalization.”

The talk in much of Paris this week, among both elected officials and entrepreneurs, was of the looming inauguration of Donald Trump in the United States and of Brexit in the United Kingdom.

Hollande criticized Trump for his remarks about the weakness of Europe and his belief that more countries will leave the European Union. On Tuesday, U.K. Prime Minister Theresa May re-confirmed her country’s intention to leave the EU and its single market. The latter’s remarks continued to cause nervousness among London’s robust tech community.

Paris is one of several tech hubs, including Dublin and Berlin, that have been making overtures to London-based entrepreneurs who might be worried about losing access to Europe’s single market, even if the number of members drops from 28 to 27. Indeed, Hollande sought to use that as a selling point for France’s tech economy.

“It is a chance to be in the Europe of 27 if the British confirm that it is their intention to leave the European Union,” Hollande said a day before May’s remarks. “It is important to have a large market of 27 and where precisely, in the case of the digital economy, we will be able to invest massively. This is what can convince British people to move to France…We are going to do more to convince them.”

Hollande was speaking Monday at a Demo Day for the French Tech Ticket program that was launched in 2015 to encourage startups from around the world to move to France, where they would receive visas and seed money to develop their projects. Out of 1,500 applications, 50 entrepreneurs were selected.

Following presentations from 20 startups at the event, Hollande was introduced to the program’s second class, which grew to 200 entrepreneurs this year and received applications from 90 countries.

Seeking to expand its global ambitions, the government announced the launch of the French Tech Visa, a program designed to streamline the applications of entrepreneurs, engineers, investors, and developers who want to relocate to France. The visa comes with the right to work for four years in France.

Digital Minister Axelle Lemaire, speaking at the Demo Day, also took a swipe at incoming president Trump’s comment about being “tired of winning,” noting that Trump already seemed quite tired. She also emphasized that Paris wants to be a haven for international entrepreneurs.

“European entrepreneurs living in the United Kingdom, they are extraordinarily worried,” she said. “In this context, it’s important to emphasize that Paris is welcoming and open to entrepreneurs, and is conscious of the need to involve others in the ecosystem.” 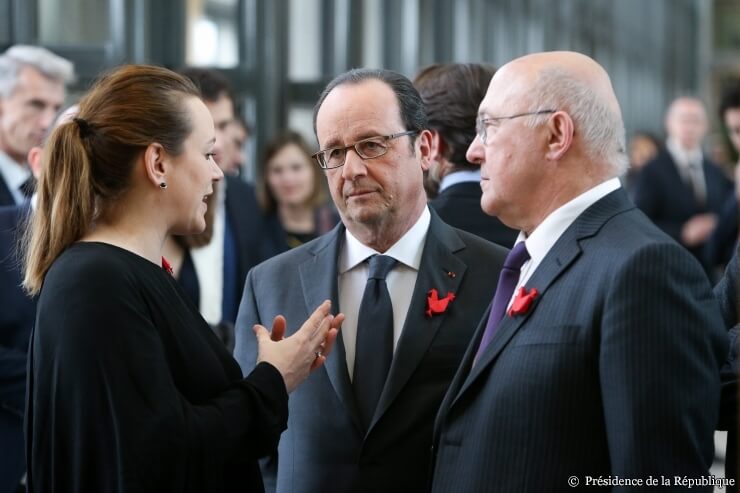 The next day, Lemaire met with her German counterpart, Matthias Machnig, to discuss plans for a joint French-German $1 billion late-stage growth fund. While venture capital across Europe has been on the rise, raising larger, late-stage funding can still be a challenge for many startups here. The two countries are hoping that international cooperation will help bridge that gap.

At the moment of their meeting, far across the city, French journalists were gathered at Station F, where Facebook’s Sheryl Sandberg was announcing that her company would open an incubator for data-driven startups. The $265 million startup campus is set to open in April and has already attracted a wide range of venture capital firms, hacker spaces, and incubators.

The campus is located inside the historic Halle Freyssinet train station, which is nearing the end of a two-year renovation that has been funded almost exclusively by Xavier Niel, a French telecom entrepreneur. Niel has said part of his motivation for opening Station F was to create a kind of global symbol for the rising French Tech scene, a message that Sandberg seemed to echo.

“Paris has always been a place where people come together to break new ground,” Sandberg said. “Now Paris has a thriving tech scene. Entrepreneurs are the engine of economic growth all over the world. At Facebook, there’s nothing we care about more than supporting them.”

These big events eclipsed a number of other interesting developments.

For instance, Serena Capital, a Paris-based venture capital firm, announced the closing of an $85 million fund focused on artificial intelligence, Europe’s first. That was a prelude to a larger announcement the French government is making on Friday about a strategic initiative to boost the country’s AI ecosystem. France already has a large concentration of AI and machine learning researchers and startups, but, as with other aspects, it’s hoping to do more to gain international recognition of that potential.

All this effort to draw in outsiders reflects a cultural and political shift for France. Whether these initiatives succeed could go a long way to determining whether the French Tech community can secure its place as a global startup movement that truly transforms the country’s economy.

“When you look at the top ecosystems, the percent of international people and talent is really what contributes to the innovation that comes out of there,” said Roxanne Varza, director of Station F and a Silicon Valley native, while on stage at the Demo Day. “That’s one thing that’s been lacking in this ecosystem. And it’s terrific to have a program like this that is finally addressing that. I think this is hugely important.”