With 22 acquisitions of private U.S. companies last year, Yahoo proved more acquisitive than companies like Google, Facebook, and Apple, according to new data from financial research firm PrivCo. It’s a huge shift from 2012, when Yahoo didn’t appear in the list of top 50 acquirers.

“It’s hard to see a rhyme or reason here,” said Hamadeh. “The concern is that when you’re buying a company every two weeks … are you integrating these companies as part of a grand plan?

“And despite all these acquisitions, Yahoo revenues are pretty flat.”

MORE: Here’s the inside scoop on Yahoo’s real acquisition strategy from a Yahoo SVP.

Yahoo’s acquisitions ranged from smaller purchases like Snip.it and Summly, where engineering talent often proved the real target, to major buys like the $1.1 billion Tumblr acquisition in May 2013. A loose theme across Yahoo’s 22 purchases is a focus on mobile, but a lot of the purchases seem like attempts to catch up to other tech titans.

Now that e-commerce giant Alibaba has filed to go public, Yahoo (a major Alibaba shareholder) is going to have a lot more cash in its war chest. But some folks on Wall Street believe that with billions more dollars on-hand, Mayer will blow it on even bigger acquisitions instead of returning that value to shareholders, said Hamadeh.

The rest of the pack

Below the number one spot sits Google, which acquired 19 private U.S. tech companies last year. Surprisingly, right after Google is Autodesk, maker of 3D design software like Maya, with 11 purchases.

Autodesk’s “management team has clearly made a decision that they don’t want to be left out and fall behind in technology,” said Hamadeh.

None of the top 10 acquirers are private, but it’s worth noting that Twitter (in the #7 spot) made all of its 2013 acquisitions prior to its IPO.

One unusual name on the list in Marlin Equity, a private equity firm, which sits in the #9 spot. In earlier years, Marlin focused largely on brick and mortar plays, not private tech companies, but it shifted focus in 2013 to focus on tech.

PrivCo’s research is based on proprietary, in-house data. It’s faced some criticism in the past for inaccurate reports, but the firm is focused on tracking private companies, which are almost always less forthcoming with their financial data than public companies.

We’ve included the full list of last year’s top 10 acquirers of private tech companies below. Check back tomorrow for info on the top 10 tech VC firms. 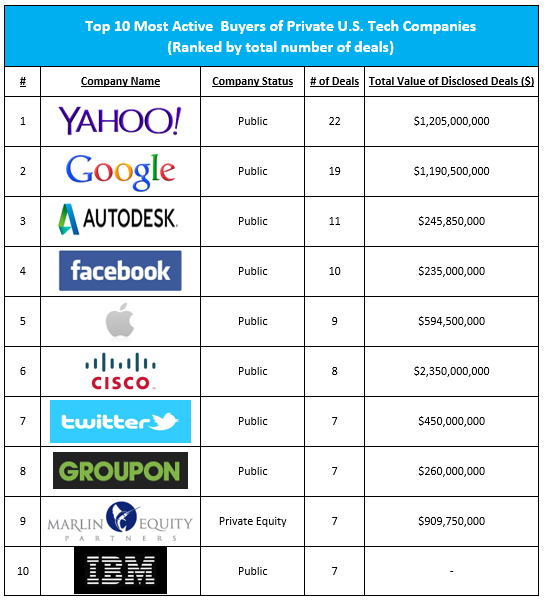