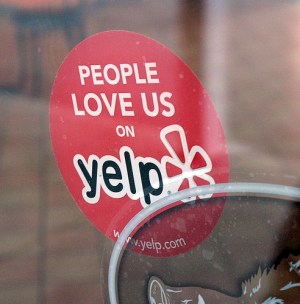 Yelp’s S-1 for its upcoming IPO is a breath of fresh air. After five months of studying the S-1 of daily deals site Groupon, I’m glad to see local-business-reviews site Yelp come out with a reasonably clean document.Groupon tortured many accounting rules and made up some of its own (forcing it to amend its S-1 repeatedly and delaying its IPO), but Yelp seems to be playing by the books.

Groupon’s S-1 had me writing “bullshit” in the margins regularly as I read it; I have relatively few concerns with Yelp’s S-1. Groupon’s S-1 endlessly hyped a toxic business model; Yelp’s provides a somber view of a better model.

Groupon showed that by convincing small businesses to sell their dollars for 50 cents (and charging them 25 cents for the privilege), you could generate a lot of revenue quickly. A lot has been made about the hundreds of millions that Groupon has spent on customer acquisition, but what has largely gone unsaid is that most of its marketing costs were really borne by the small businesses in the form of outsized discounts. Those merchant-funded discounts are what enticed consumers to sign up for Groupon.

Yelp’s S-1 shows what we’ve known all along about the small business market: it’s a really, really tough business. Getting and keeping small business advertisers is difficult and expensive.

Groupon touts a “no risk” model. In reality, it’s a “no money down” model. There is plenty of risk, it’s just hidden. Yelp sells its product as a media buy. It turns out that when you’re upfront about what you’re selling and how much it costs, it’s harder to get people to buy.

In the quarter ending in September, Yelp generated revenue from 19,000 businesses. That’s 3.6% of the 529,000 businesses that have claimed their Yelp listings; and it’s a speck in the universe of the more than 20 million businesses listed on Yelp. For the first 9 months of 2011, Yelp generated a loss of $7.6 million on $58.4 million in revenue. Yelp spent $38.5 million, or nearly two-thirds of its revenue on sales and marketing.

Rocky loves Yelp
I like to get my biases out in the open: I’m a big fan of Yelp, the product. I have been using Yelp since January 2006, early enough to get rocky.yelp.com as my vanity URL. I was an early elite member and wrote some of the first reviews of restaurants in Arlington, Va. In Yelp’s early days, I would email CEO Jeremy Stoppelman with product ideas.

Yelp unquestionably has the most comprehensive reviews and data set for restaurants and entertainment venues in the U.S.  With commercial data providers, 18-month delays for new businesses to be listed were common. In active Yelp markets, many businesses appear the day they open. (Some appear in Yelp before they even open, as eagle-eyed Yelpers stalk construction sites.) Just as important, closed businesses are flagged on Yelp months before they are on other sites.

Yelp is still the only company that has created true local communities of people who are excited about contributing to a local guide and who socialize with each other. Although a lot of people credit Foursquare with kick-starting gamification, I credit Yelp. They used a combination of virtual and tangible incentives to get people to act. Yelp staples such as Funny, Useful and Cool created important interaction and reinforced desirable behavior.

I consider Yelp a boon to independent businesses. It dramatically reduces the information cost associated with picking a local business. Instead of making a reflexive decision to go to a mediocre and overpriced (but known quality) chain, Yelp makes it easy to try new places. A Harvard Business School study says, “chain restaurants have declined in revenue share as Yelp penetration has increased.”

But as a potential investment, Yelp has some significant challenges. 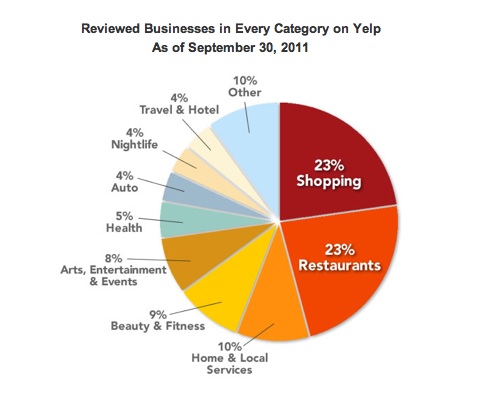 This chart was also part of the S-1. A quick read of this chart would lead people to believe that only 23% of Yelp reviews are for restaurants. But that’s incorrect. For the purposes of this chart, Bi-Rite Creamery, the most reviewed business on Yelp, with more than 4,250 reviews counts as much as Frattallone’s-Ace Hardware with 1 review.

Whether Yelp is more than a restaurant review site makes a huge difference in its long-term success. One of the long-standing challenges in local reviews is that the categories where advertisers can afford to spend a lot of money (e.g. contractors, lawyers) are also categories that are searched infrequently. Restaurants, nightlife and related categories have lower spend.

In those other categories, Yelp has a wide range of vertical competitors, including Angie’s List (which had its own IPO last week), TripAdvisor and 1-800-DENTIST. Unlike Yelp, many of those competitors spend significant sums on consumer advertising. Even within the restaurants category, Yelp competes for marketing dollars with OpenTable.

Acquisition cost and churn
Yelp’s core business model is advertising. It sells a variety of ad products to both small businesses and bigger brand advertisers. It also has its own deals product, which it scaled back earlier this year.

I was pleasantly surprised that national brand advertising is only 22% of Yelp’s revenues. Local ads accounted for 69% of its revenue, meaning that Yelp is successfully reaching advertisers. Each local advertiser generated, on average, $828 in revenue for Yelp.

But Yelp provides little data for investors to calculate how efficient that effort is. There is no data on merchant acquisition costs or churn rates among merchants. The best data that we have say that in 3Q, Yelp served 19,000 businesses and spent $14.9 million on sales and marketing.

Low-hanging fruit
One of my biggest concerns about Yelp’s model is that the company seems to have already picked the low-hanging fruit. As you would expect, Yelp started with larger metro areas and has filled in smaller markets over the years. It’s S-1 is honest on this point:

Although our revenues have grown rapidly, increasing from $12.1 million in 2008, to $47.7 million in 2010, we expect that our revenue growth rate will decline in the future.

Cohort data showing how various groups of markets have performed starkly illustrate this. The earliest cities, including San Francisco, New York and Chicago, generated $4 million per market year to date. For the 2007-2008 cohort, which includes Portland, Dallas and Miami, revenue drops to $761,000 per market.

The bottom line
I predict a lot less drama on Yelp’s road to IPO than Groupon had. Yelp has a lot of strong assets, but it also faces stiff competition from a wide range of competitors. I can make credible bull and bear cases for the company.