“Adults” might still be grappling with the idea that their kids are absolutely content to send spontaneous pictures and videos to their friends as one of their primary means of communication. But that’s not stopping even simpler apps from surfacing — and even grabbing some money.

Meet Yo, an app whose entire function is to send a “Yo” to your friends — and that’s it. If texting is cooking a meal from scratch, then Yo is getting a single bagel delivered.

Sure, you’re likely in shock right now, wondering why that elaborate robotics startup you’ve been working on for years — years! — has yet to get a single penny from anyone who’s not your mother or spouse, yet this app whose entire existence is built around sending a two-lettered urban greeting is now $1 million richer after launching less than three months ago.

But what if we assume that raising funding means that Yo has gotten some traction, a.k.a. users and engagement?

Like it or not, many of today’s smartphone users want want easy — even lazy — communication, and they seem to want Yo. According to the company, it already has 50,000 active users who have sent almost 4 millions “Yos” so far.

Yo is a like a “poke,” that long-forgotten Facebook feature that was useful when you just wanted to nudge a friend but didn’t really have anything to say. Or when you were bored and loitering on Facebook. Or if you were lazy and typing actual words was too much work.

“Sometimes going into an app, typing out a message, all of that takes way too long. The beauty of Yo lies in the fact that this simple message can mean anything, it all depends on the context of the conversation,” Or Arbel, chief executive of Yo, said, in an official statement.

“Whether you just want to say ‘hi’, or ‘where are you?’, or even ‘I love you’ – Yo is the easiest and fastest way to do it. Of course, it’s also one of the most fun apps you’ll ever use,” he added.

Or is it a sign that we just love dumb colorful apps because they’re shiny, new, and easy to use, and we get bored really fast?

Could be both. But it could also be a sign that at the end of the day, we want to feel connected to other humans, and sending someone a nudge and getting an acknowledgement in return actually helps, even just a little bit.

And Yo may actually be onto something here, as it now has an API, which could potentially reinvent notifications as we know them, turning them into something that feels a tiny bit more of a social connection. This means that Yo users can send and receive “Yos” from services such as blogs, sports teams, online stores, and so on.

A “Yo” from your favorite soccer team because it just scored is much more fun than a bland notification, isn’t it?

Yo was founded by Or Arbel and Moshe Hogeg, and is available on iOS and Android. 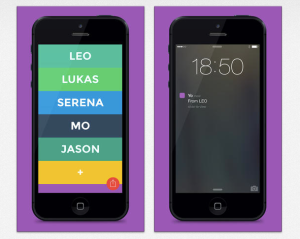