ZenCity, an Israeli startup that analyzes online conversations and reports trends and sentiments to city officials, has raised $6 million in a series A round of funding from Vertex Ventures, Microsoft’s M12 venture fund, and Canaan Partners Israel.

Founded out of Tel Aviv in 2015, ZenCity aggregates feedback and comments from multiple sources, including social networks, news websites, and municipal hotlines, and applies artificial intelligence (AI) to help extract meaningful “structured” data for city planners and managers to tackle the issues that are most pertinent to residents in their area. Indeed, the AI ensures that the feedback is automatically organized by topic, category, location, and more.

The platform can be used for just about anything relating to city services or infrastructure, such as tracking sentiment regarding new traffic-calming measures or car-sharing initiatives, or identifying issues such as sidewalk maintenance or the standard of local education. 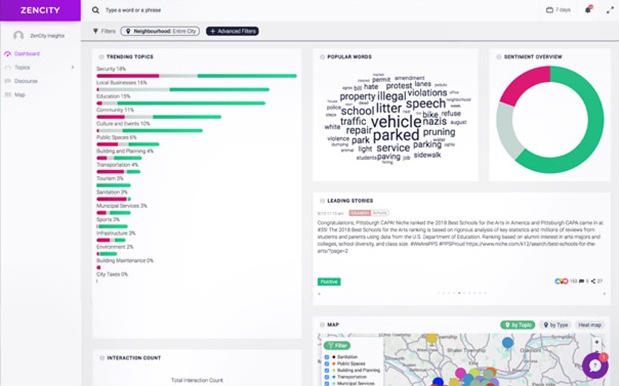 Prior to now, ZenCity had raised $1.7 million in a seed round of funding, while part of its latest $6 million tranche comes via a slightly unusual route.

Last October, Microsoft launched the $3.5 million Innovate.AI competition for AI startups, and three regional winners (North America, Europe, and Israel) were announced in May. ZenCity was the winner for the Israel region, and part of its prize constituted a $1 million equity investment from M12 and Vertex Ventures. The duo were clearly sufficiently impressed with ZenCity to ensure that the startup’s next cash injection was 600 percent larger than the prize alone promised.

“The goal of Innovate.AI was to find the most innovative startups harnessing the power of AI to solve real-world challenges,” noted M12 principal Lior Litwak. “ZenCity’s mission of making city leadership more empathic and attentive to community needs truly resonated with us.”

ZenCity nestles nicely within that broader push: In effect, it is pitching itself as a data-driven, modern day alternative to town hall meetings and surveys.

The company expanded into the U.S. last year, and it now offers its services to cities including San Antonio, West Sacramento, and Fort Lauderdale.

“ZenCity’s rapid growth in the U.S. is a testament to the commitment that cities have to connecting with and understanding their citizens,” added ZenCity CEO and cofounder Eyal Feder-Levy. “It also reflects an increasing demand by U.S. cities to be more data-driven.”

With another $6 million in the bank, ZenCity plans to expand its data analytics capabilities, “push the boundaries” of its services, and expand across the U.S. and into markets elsewhere.

One particularly notable feature that it will work on as a result of its funding will be speech-to-text functionality. For now, it relies on notes taken by contact center workers which are manually added to their online system, but in the future ZenCity may be able to “listen” to verbal feedback and transform the audio into meaningful text-based data.

“As more and more cities get on board with our solution, the exciting potential of A.I in local government becomes even more evident,” Feder-Levy added.