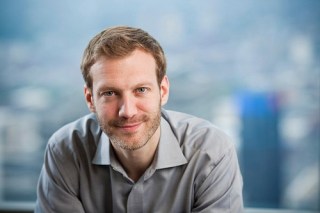 Three years ago, Mark Pincus told me that he was going to make Zynga more valuable than EA within five years. It took him only two.

Zynga is a remarkable venture story, and the company’s impending IPO is a huge moment for the games industry — it marks the coming of age of the West’s leading proponent of casual, free-to-play gaming.

With the timing for the company’s roadshow now seemingly confirmed, what should we expect from Zynga as it goes public? The answer reflects Pincus’ exceptional level of ambition and has implications both for how investors should think about the company and how other developers manage their go-to-market strategies.

Zynga’s topline is driven by two factors: the number of daily active users (DAUs) across all platforms, and the average amount that these users pay per day to play the games (average bookings per DAU, or ABPU). Since the DAU levels for each title typically erode from an early peak, the company’s total DAU count is built upon the subsiding foundations of its previous titles. So, to grow its DAU count, Zynga has to release more popular titles more frequently.

This is exactly what the company is gearing up to do as it enters the busiest launch schedule in its history. It recently launched Castleville on Facebook and Words with Friends, Poker, and Farmville Express on mobile. Imminent additional releases include Zynga Casino, Zynga Bingo and Hidden Chronicles on Facebook, and Mafia Shakedown and Dream Zoo on mobile. Of these, Hidden Chronicles and Dream Zoo are the most important because they represent beachheads into new game genres for Zynga.

This hectic release calendar has been supported by aggressive hiring of business and technical talent, as well as 15 games studio acquisitions so far this year. Alongside these investments, the company’s quarterly cost base has doubled from $136 million in Q3 2010 to $275 million in Q3 2011.

We don’t know how these new releases are going to perform, nor is it possible to get a great sense for what Zynga’s release schedule will look like over the next year. But, let’s suppose that Castleville matches Zynga’s best-performing recent release, Cityville (this may be conservative given Castleville’s blockbuster start), and let’s also assume that Zynga releases one additional Frontierville-sized game every three months throughout 2012. Under these assumptions, we would have a business that held DAUs roughly flat throughout 2012 at near-peak levels for the company. 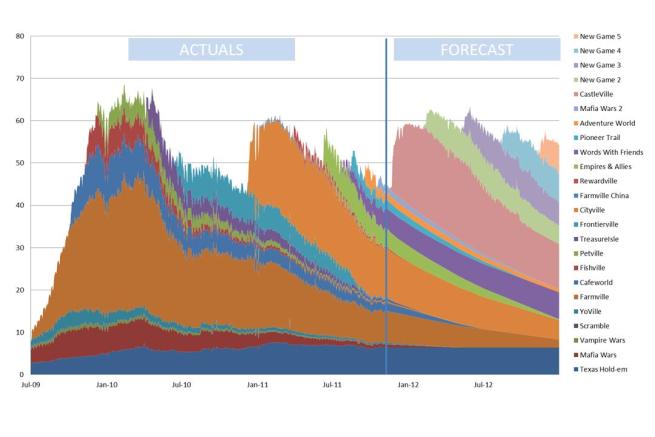 Zynga reports on both bookings and revenue in its S-1 materials. Bookings is a better indicator of cash generation than revenue because it reflects when Zynga collects payment from the user (net of Facebook’s payment terms), whereas revenue maps to the lifetime utility of the purchased good. For similar reasons I focus on “bookings minus costs” rather than “earnings before interest and tax” as the profitability metric (for a longer explanation see Pascal Emmanuel Gobry’s TechCrunch article).

The company has successfully grown average bookings per DAU (ABPU) over the past couple of years at the rate of 4% per quarter. This increase has been fairly consistent following a decrease in Q3 2009 associated with the massive acquisition of new Farmville users diluting the harder-core Texas Hold-em and Mafia Wars users. The rate is subject to a complex set of forces, including Zynga’s increasing monetization expertise and shifts in audience composition (e.g. towards higher-paying mobile audiences, but towards non-US audiences that typically monetize less well). Since these forces are likely to remain broadly consistent from 2011 into 2012, let’s assume that the 4% trend also holds.

Coupling these revenue forecasts with the following cost assumptions gives us the bookings and “bookings minus costs” results in Figure 2 below (these forecasts are entirely my own, I have not seen the company’s roadshow materials nor spoken to company executives or investors on this topic, and all my analysis is drawn from public sources). 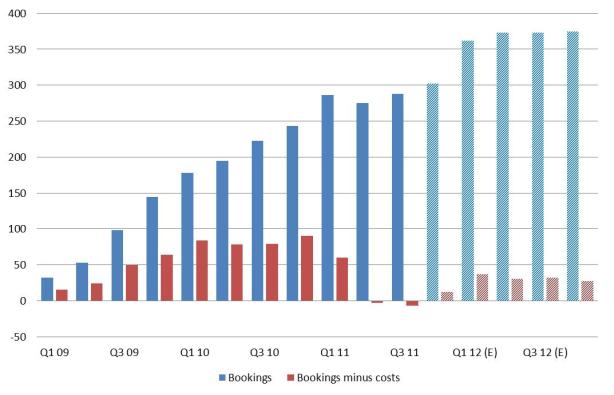 [Figure 2. Zynga historical and projected quarterly bookings and “bookings minus costs”. Based on data from Zynga’s S-1 filing.]

The analysis implies that Zynga’s topline shows good growth, but our measure of profitability, bookings minus costs, is modest at 5-10% of bookings. This forecast, of course, rests upon our DAU assumptions for 2012, but even if we double the DAU numbers for 2012’s four “New Game” releases, the 2012 bookings minus costs figures would not match the 2010 figures ($318 million in 2012 vs. $332 million in 2010).

The reason for this is not that Zynga isn’t a great business or can’t command rich margins; 2010 proved that it can. It is because the company has chosen to invest so dramatically in R&D. Between Q3 2010 and Q3 2011, Zynga’s bookings minus costs margin went from 39% to 4%; increased R&D spending was responsible for $75 million of the $139 million increase in costs. It would be fairly easy for Zynga to trim R&D and deliver near-term growth in quarterly cashflow to public investors, but it seems likely to me that Zynga will continue to forego high levels of profitability in 2012 in favor of maintaining its capacity for investment.

Looking forward
To say Pincus has ambition is to make a massive understatement. Having made Zynga more valuable than Electronic Arts, I believe he’s moving on to a broader ambition – to become the social gaming layer for the entire web.

Zynga will probably invest over $500 million in R&D in 2012. Much of this will, of course, go to launching new titles to identify rich new genres of social gameplay, but it seems likely that significant sums will also go towards implementing Zynga’s platform vision. We don’t have many of the details, but the announcement last month at the Zynga Unleased event of the company’s gaming platform “Platform Z” and its “Z tag” gaming identity system appear to be important components of a future that is both broader and potentially less dependent on Facebook.

It is clear that Zynga is building a social layer for gamers that will sit above the underlying platforms – Facebook, Google+, and the web. Platform Z’s features will be tailored to the needs of gamers, offering live chat, content sharing, gifting, gamer tags, and the ability to conveniently connect with similarly-skilled players who are not friends in real-life. This should provide a better gaming experience for users and increase their loyalty and time spent with Zynga brands (the business already does an excellent job at cross-selling its users among titles).

Zynga has remained noticeably silent on whether it will make these platform features (plus back-end capabilities such as analytics) available to third-party developers, but my bet is that it will. At Zynga Unleashed, Pincus said, “We aren’t the company that will make the next hit game. We are trying to do something broader than that. We want this experience to make up a platform for play.”

A platform that is available to all game developers and that is backed by Zynga’s financial and technical resources would have a great shot at becoming the world’s de facto social gaming layer.  That is an ambition worthy of Zynga’s second act.

If Zynga were to make its platform available to third-parties, developers would need to consider how to respond. Zynga’s value proposition is most attractive to more creatively-focused developers that do not want to build their own analytics and social capabilities. The larger players such as EA and Disney will stick with their own publishing solutions and may offer rival platforms to Zynga.

Mid-sized developers will face the hardest decision. Social gaming companies that are currently considering renting their own back-end platforms to third-parties will need to make sure their own offerings can compete before committing to the costs of supporting their platforms.

What does all this mean for public investors? The financial analysis described above is not predictive, but it suggests to me that Zynga is not shaping its business to deliver high margins next year. I believe smart investors considering buying Zynga stock at the IPO will understand they are betting on Zynga’s long-term platform vision, not on 2012 cashflow.

Andrew Cleland is a partner at Comcast Ventures.