Skillz has created a platform for people to play mobile games for real money. And today it announced that its top 10 mobile esports athletes won $2.7 million in prizes during 2017. The top player scored $420,000 in prizes in 2017, placing her in the top 25 highest-earning esports athletes in the world, according to eSportsEarnings.com.

That means it’s not such a crazy notion to try to make a living as a mobile esports player. Overall, esports is expected to become a $1.5 billion to $2.5 billion industry by 2020, according to market researcher Newzoo. But most of that prediction focuses on PC and console game esports, rather than mobile.

But San Francisco-based Skillz has bet on mobile esports because there are more people playing games on mobile than other platforms.

Women accounted for seven of the top 10 spots, and the top two are women.

“There’s a reason Skillz games have been a big part of my daily life for several years,” said Alex Heitmann, who ranked in the top 10 (fifth) for the second year in a row. “I’ve always loved competing with others to become the best, but I never thought I’d be able to earn a living playing video games.”

Here’s the top 10, with their handles, state of residence, and winnings: 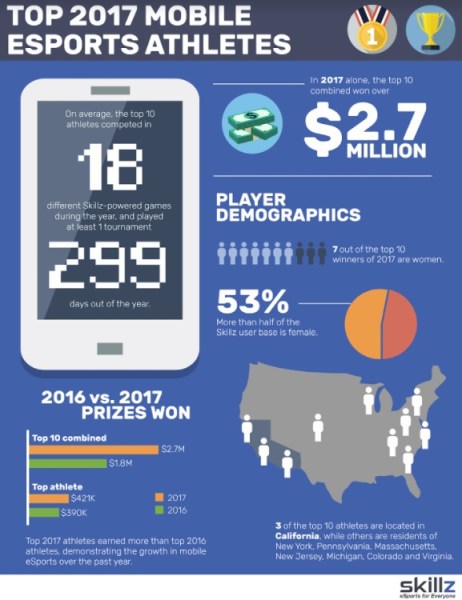 Above: Skillz players are making a lot of money in mobile esports.

Beyond the players, the industry’s growth is also a testament to the game developers who have created the emerging sports. With over $25 million in prizes last year, Tether Studios’ Cube Cube awarded more money to players in 2017 than top esports titles such as Valve’s Counter-Strike: Global Offensive, Activision Blizzard’s Call of Duty and Supercell’s Clash Royale.

“Just as Shaun White defined snowboarding and Tony Hawk popularized skateboarding, Skillz competitors are defining what it means to be an eSports athlete,” said Skillz CEO Andrew Paradise, in a statement.

Skillz raised $25 million in 2017 from Telstra and Liberty Global Ventures. More than 12 million players use Skillz to compete in mobile games from 3,000 game studios. Skillz was founded in 2012.