The Apex Legends official esports league is getting a $5 million prize pool and a return to live physical events (if conditions allow) for the coming year. EA and Respawn Entertainment‘s battle royale’s competitive slate will feature a mix off of online and physical events, crossplay competition, and pro/amateur battles.

The Apex Legends Global Series (ALGS) kicked off in June with a showcase of 170 of the best Apex Legends squads from around the world. The esports events are the tip of the spear for EA and Respawn’s efforts to grow the already large audience for Apex Legends. Earlier this year, the Apex Legends battle royale game crossed more than 100 million players.

Year 2 of the ALGS will feature the Pro League and Challenger Circuit competition.

In June, the inaugural Apex Legends Global Series (ALGS) Championship showcased 170 of the best Apex Legends squads from all over the world as they battled for a share of an ALGS record $2.5 million prize pool.

“Year One’s record-setting viewership and engagement has made us incredibly optimistic about the future of Apex Legends competitive gaming,” said John Nelson, the commissioner of Apex Legends Competitive Gaming at EA, in an email to GamesBeat. “The deeply passionate community of players and fans inspires us to continue to push the boundaries of what’s possible for the ALGS and to build this title into a leading esports franchise.”

The ALGS Championship generated an average minute audience (AMA) of over 180,000 during the North America Finals across player streams, watch parties, and the official broadcast, establishing a new ALGS viewership record. This exceeded the previously most-watched ALGS competition — the NA Winter Circuit Playoffs in March 2021 — by 32%.

ALGS fans watched more than 3.5 million hours across North America and Europe, Middle East, and Africa Championship Group Stages and Finals, which resulted in more than 90,000 AMA for those competitions.

Throughout the first half of 2021, the game was the second most tweeted about video game in the world, EA said. 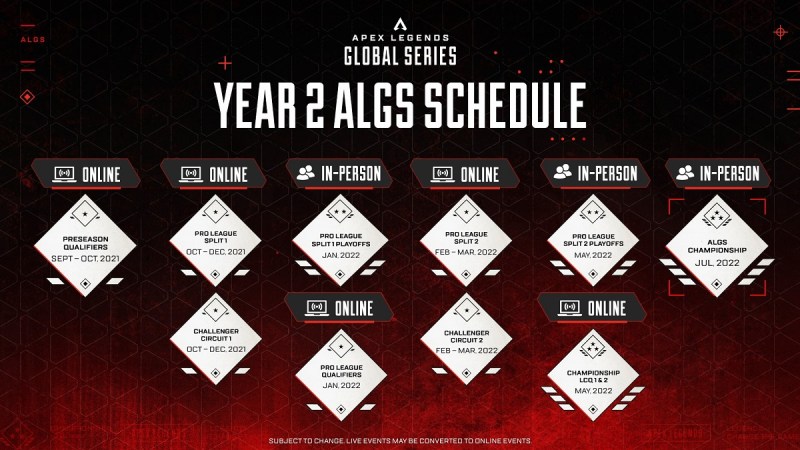 Above: Year 2 of Apex Legends esports.

Both professional and amateur Apex Legends players can participate in the ALGS Pro League and Challenger Circuit in multiple regions around the world. The ALGS is also enabling Xbox and PlayStation players to participate, bringing a large majority of players and fans under the same competitive umbrella.

To maintain competitive integrity, all controller players will be competing using PC-value aim assist settings, regardless of their platform. The battle between controllers vs. mouse-and-keyboard is about to reach a whole new level of intensity, EA said. 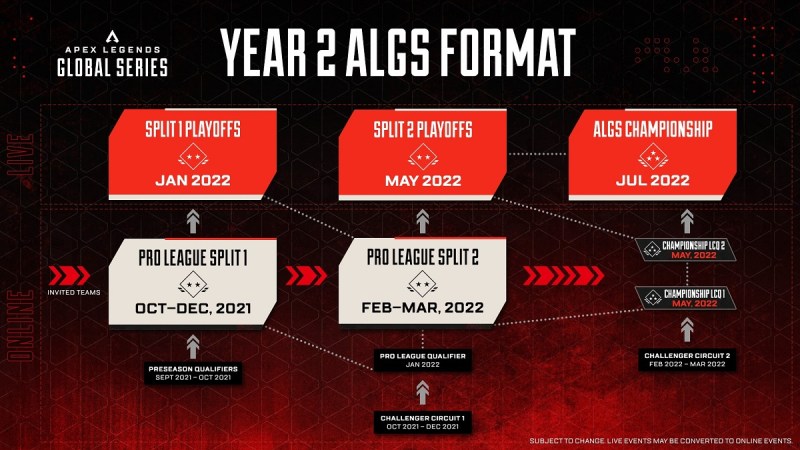 Above: The format for the upcoming Apex Legends esports season.

The ALGS Pro League will have 40 teams across five regions. The top 20 Apex Legends squads will get their spots in the Pro League via invite, while additional teams will fight for the remaining spots during Preseason Qualifiers. It’s designed to provide a level of consistency for both players and fans, bringing more high-level Apex gameplay and content to the community to build engagement and fanfare.

ALGS Challenger Circuit is an amateur competition that will run parallel to the Pro League season, providing aspiring Apex pros with the chance to qualify for the Pro League. It will elevate opportunities at the amateur level and provide a clear path to professional play.