There may be no better measure of the progress the exploding esports industry has made in recent years than a gathering planned this week along the glamorous beaches of Cannes.

For the next three days, Esports Bar, a conference dedicated to the business side of this surging industry, will gather many actors from the sectors one would expect: video game publishers, esports leagues, and even some players. But it’s the unexpected names that make it notable: Facebook to discuss esports partnerships, executives from Renault and Coca-Cola to explore sponsorships, and a German soccer league planning to announce its esports strategy.

With money pouring into esports and viewership numbers climbing, a growing range of companies and media are trying to understand the phenomenon and how they can hop aboard in order to connect with a highly desirable millennial fan base. For the esports industry, it’s a sign that the sport is on the verge of crossing over from niche curiosity to mainstream acceptance — if it can address some of its most fundamental challenges.

“This is what’s at stake for the sector,” said Stéphane Gambetta, esports development director for the entertainment division of Reed Midem, the French company organizing the event. “There is all this interest from major mainstream players. But to bring in an audience of regular viewers, there has to be specific content — like things that make the games easier to understand for people who don’t play. And what are the business models? How do we make this interesting to everyone financially?”

This will be the second edition of this event in Cannes, though the first year was an invite-only networking event for high-level executives that was supposed to create a marketplace for esports deals to happen. That marketplace is still the foundation of the second edition, but this year, Esports Bar will also feature a conference with panels and keynotes designed to debate issues facing the industry and educate newcomers about how esports work.

“We launched a first edition because we perceived a need, with people building these sports sectors and expanding,” Gambetta said. “Non-endemic players wanted to get in but didn’t know where to start.”

The year since the first event in 2017 has been an extraordinary one for the esports industry. According to research by CB Insights, esports were projected to bring in between $500 million and $1.1 billion in revenue last year. The firm now counts more than 300 esports leagues in existence. And since 2012, privately held esports companies have raised more than $5 billion in venture financing across 350 deals.

“In the last year, investment to private esports companies grew by over 30 percent while overall industry revenue mirrored this figure,” said CB Insights intelligence analyst Jud Waite. “This rate topped that of the broader gaming industry, as well as a majority of professional sports organizations worldwide. We expect to see continued growth as the esports industry continues to engage audiences and monetize in new ways.” 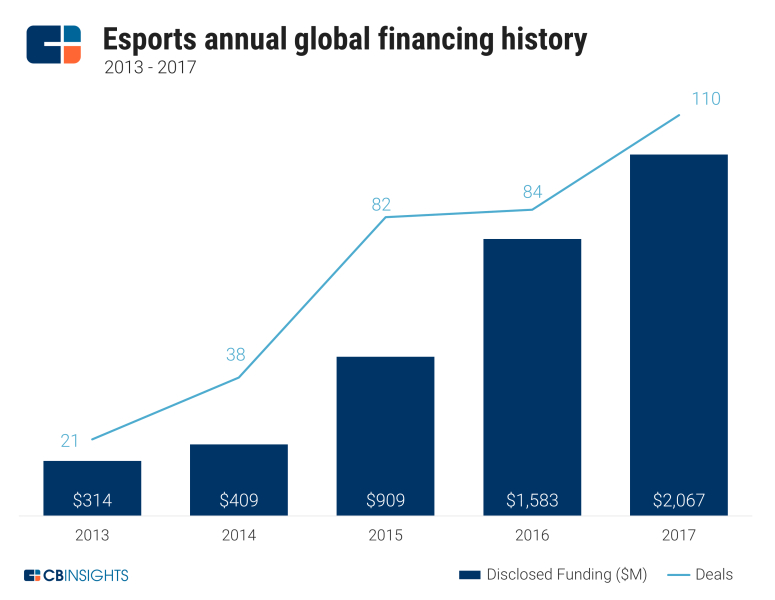 That money and buzz is attracting attention. CB Insights reported that the number of esports mentions in the press have more than doubled annually since 2014. ESPN2’s move to start broadcasting esports in 2015 helped that momentum.

More recently, deals have materialized with Hulu and Turner Sports that are taking the sport beyond its audience based on dedicated streaming services like Twitch. In May 2017, ESL, a leading esports company, and Facebook announced that the social network would livestream ESL matches and also create a weekly highlights show.

Perhaps one of the biggest esports moments in the U.S. happened last summer when Blizzard announced the first of several regional teams for its Overwatch League. Robert Kraft, the owner of the NFL’s New England Patriots, would own a Boston-based franchise in that league. The idea in creating teams based on geography was to build more interest, loyalty, and passion among a wider base of fans.

“We have been exploring the esports market for a number of years and have been waiting for the right opportunity to enter,” Kraft said in a statement at the time. “The incredible global success of Overwatch since its launch, coupled with the League’s meticulous focus on a structure and strategy that clearly represents the future of esports made this the obvious entry point for the Kraft Group.”

And coming soon: the NBA 2K League. The esports league is a partnership between the NBA and Take-Two. Qualifying rounds have already started. And while initial matches are planned to take place in studios, the NBA has said using its various arenas is part of its long-term plans.

Which points to another important constituency: arena and conference center owners. Recently, AEG, one of the world’s largest concert promoters, inked a deal with ESL to use its global network of venues for certain esports events. Those include the 18,000-capacity Barclay Centre in New York and London’s O2 Arena with room for 20,000.

There was talk last year that organizers of the Olympic Games in Paris for 2024 would consider adding esports. Given that the International Olympic Committee backed an esports tournament this week, Intel Extreme Masters (IEM) in Pyeongchang, South Korea, before the Winter Olympics, its eventual inclusion in the Olympics seems quite possible.

But while this is all positive, Gambetta points out that it would be a mistake to assume that mainstream acceptance is inevitable.

Indeed, many of the sessions at the Esports Bar address some of the issues head on: how to attract sponsorships, how to consider broadcasting deals, how to understand the Chinese market, whether or not to embrace betting, and what are the next platforms and technologies for esports?

Bringing in sponsors is a particularly pressing issue. While prize money has been climbing, CB Insights noted that esports make about $3.60 per fan, compared to $60 for the NFL. A big reason for that gap beyond broadcasting rights is due to sponsorships, which still tend to center on technology-based brands like Dell, Samsung, and Intel or obvious consumer ones like McDonald’s and Pepsi. To get bigger sponsorship bucks, the industry needs so-called “aspirational brands,” such as car makers and financial companies.

Renault will hold one of the main press conferences at Esports Bar, something Gambetta hopes will send a signal that such brands are interested in esports. And with Nielsen recently announcing plans to start measuring viewership for esports events, advertisers and brand managers should have more reliable third-party data on which to base decisions.

Bringing more of that structure to what has been a fast-moving, but sometimes chaotic, insurgent business should create confidence and build a foundation for what may well become this century’s most popular international sport.

“We are seeing more and more of these companies that are entertainment giants that are looking at esports,” Gambetta said. “We are getting past the curious phase, and now, they want to know how they contribute to the esports sector. It’s moving quite quickly, and it’s very exciting.”