Instant messaging app Discord has become a go-to social hub across the globe. Much like its online community-driven predecessors – think Instagram, Facebook, and YouTube – more than 100 million people use it to connect and engage on a monthly basis.

Recently, Discord has pivoted to engage new audiences. But at its core, Discord was designed as a home for esports fans and gamers. Beyond those using it for fun and games, there’s a rising tide of esports entrepreneurs using Discord to launch their businesses.

The idea of starting a business with the help of a social network isn’t unique. In fact, 91 percent of U.S. companies use social networking sites for marketing purposes. However, what is unique to Discord is the dialogue-friendly design.

To paint the picture, esports entrepreneurs looking for feedback on their ideas face a common problem when using legacy social tools like Facebook: These sites were designed for users of diverse interests, folks who spend 80% of their time consuming content and only 20% of time creating it.

But Discord has an entirely different approach that flips this 80%/20%. It’s for gamers who operate best in communities where they can engage with fellow players. Discord fosters an environment where you can communicate directly with your users and build a community in a way that traditional social media platforms, like Facebook, can’t replicate. That’s because the whole Discord platform is built around chats (text and voice) rather than posts, which means all interaction happens in real-time.

To better understand how this model makes Discord a prime launchpad for esports entrepreneurs, let’s take a look at a few examples.

One great example is Game.tv, which in late 2019 launched an esports tournament platform for mobile games on Discord. Instead of trying to grow a network from scratch, they leveraged Discord to run mobile gaming tournaments – giving them immediate access to millions of mobile gaming fans.

Discord users can discover Game.tv’s platform and set up and operate mobile gaming tournaments directly through an app they’re already familiar with. For example, participants in the game Animal Tower Battle now use Game.tv’s Tourney to run tournaments each week.

Game.tv’s bet on Discord is paying off. It piqued the interest of blue chip investors and partners around the world, including Intel Capital, raising a $25M series A round. Today, the company is rapidly expanding, with teams across more than 20 countries including Korea and Japan.

Guilded, a chat platform for gaming communities, considers itself a competitor to Discord today, but the company wouldn’t be anywhere without them.

Guilded actually started in 2017 as a Discord bot. The bot’s focus was on improving gaming communities in Discord with event schedules, providing a “looking for a game” functionality. Guilded’s team noticed Discord had expanded their offering in recent years, so they created their own product — a standalone software that users download.

Discord allowed Guilded to gather input and learnings from the gaming communities and design a product with a competitive advantage over Discord: a niche product built for what competitive gamers need, focused on teams and server-based structures.

Guilded’s Discord-bot-to-product strategy worked. Today, Guilded serves over 50,000 high school, collegiate and casual teams, as well as some of the world’s top professional esports teams. Most recently, the company announced a  $7 million in Series A funding.

Sharon Winter and I launched Esports One in 2017. As a young startup with a limited marketing budget, one of the biggest challenges we faced was user acquisition. How could we convince our target audience to sign up if we didn’t have the means to reach them?

So we turned to Discord. Our strategy was two-fold: build an engaged community, and get feedback from them to consistently improve the user experience. As a long-time esports player, I saw Discord becoming the primary platform that gamers were using to build communities and communicate with each other. Discord communities are much more active than something like a Facebook group, given that users primarily interact through text and voice chat rather than a post and comment structure. Right off the bat, we saw an opportunity for tangible benefits, since Discord was built to encourage the community to directly report bugs and provide feedback.

Last year, our engineering team built OneBot, an app that Discord users can install in their servers to bring the fantasy League of Legends experience to their community. Since publishing OneBot, we’ve seen significant adoption amongst thousands of esports fans across the world.

Currently, OneBot is installed on more than 4,000 Discord servers, with nearly 40,000 users, making it one of the top Discord Bots in the esports category. The growth in just the past six months has been impressive: Servers saw a 223% increase, while users spiked by 210%.

Over the same period of time, we’ve seen our Esports One user base quadruple, which we attribute to OneBot. The craziest part? We spent nothing on marketing efforts. Instead, we created a space where users in the community can invite in new users and educate their friends on how to play fantasy. Turns out, with the help of Discord, excitement for esports is contagious. 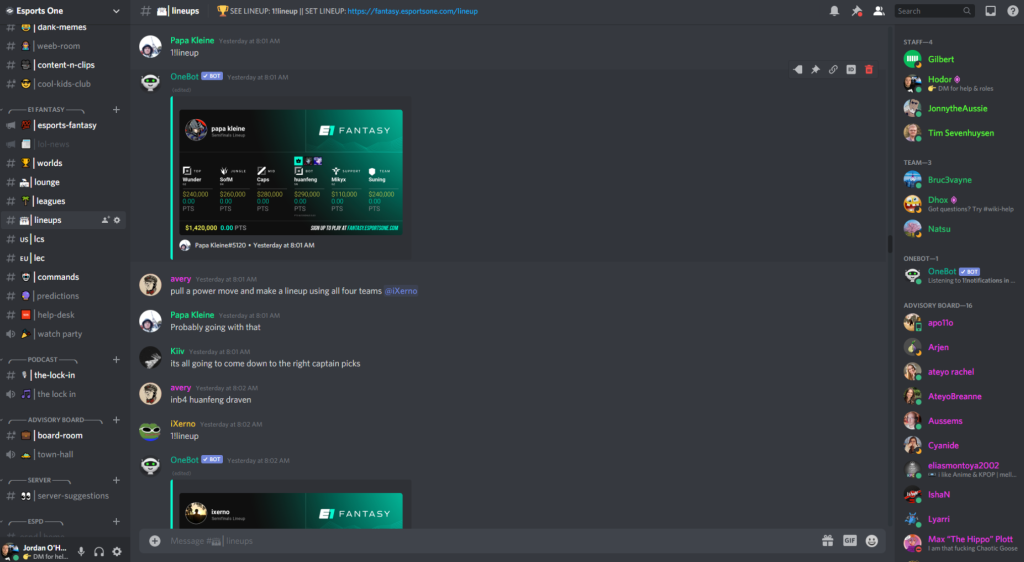 So, how do you get started leveraging Discord to drive growth? Here’s my advice:

Thanks to Discord, startups can directly see what users are saying, beyond just a thumbs up or heart emoji. It’s real-time, qualitative data. They can also engage and get direct feedback. This makes Discord an ideal platform for building an engaged community of brand advocates and an esports business.

Matt Gunnin is the CEO and cofounder of Esports One.