Competitive gaming is going through a growth spurt in 2016.

Esports-related revenues are on pace to generate $493 million in 2016, according to a report from intelligence firm Newzoo. That’s up more than 51.7 percent from 2015, and it is also a 7 percent increase from the projection that Newzoo made to kick off 2016. Most of the growth comes from gaming publishers investing in the space as well as media rights selling off to broadcasters faster than expected. The rest of that revenue comes from event sponsorships, video advertising, and ticket sales.

Newzoo now projects that esports will drive $1.1 billion in revenues by 2019. Competing intelligence firm SuperData Research claims that esports is a $892 million market, but Newzoo does not include esports gambling in its figures, which is where most of that discrepancy comes from. 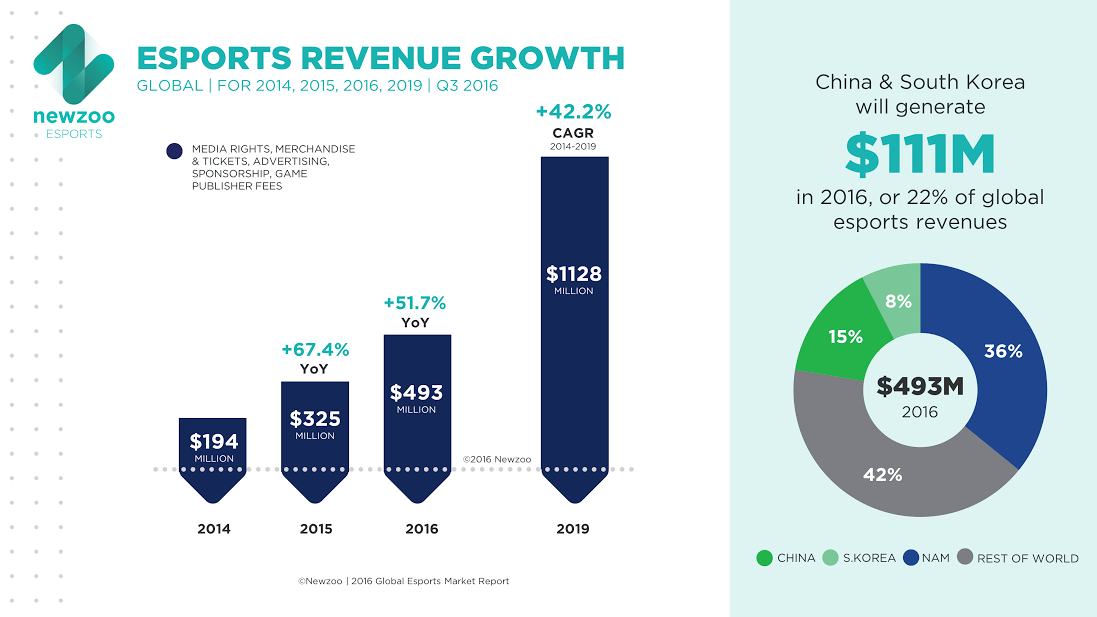 “More and more publishers are embracing esports strategically as a way to increase the longevity of their games through increased player engagement, and to boost franchise awareness among a broad audience through live competitions and tournaments,” Newzoo marketing director Emma McDonald explained in a statement. “For the latter reason, many publishers have looked to third-party organizers to help them set up tournaments around their new franchises. In total, Newzoo estimates that by the end of 2016, publishers will have spent close to $100 million to organizers to help them set up a tournaments, competitions, and leagues for their franchises.”

An example of those kinds of esports-as-marketing tournaments is Ubisoft’s Rainbow Six: Siege Pro League. The French publisher wants to keep players coming back, and it is working with event organizer ESL to put on regular seasons.

As for the media rights, that is something that is starting to shake out thanks to deals like Turner, which runs cable networks like TBS, running Counter-Strike: Global Offensive and Overwatch in its Eleague events. But those deals are a secondary or tertiary business model after increasing engagement.

“Many game publishers, however, still use esports as a marketing tool to drive the engagement of their player base, which leads to higher in-game spending,” wrote McDonald. “This is beneficial mostly to the publishers themselves.”

But the growing popularity of esports, as well as the pro teams and players, means that media rights will continue to increase in value for the foreseeable future.