Four out of five League of Legends players aspire to professional as a gamer or streamer. But only about one in two Minecraft players and fans share that aspiration. That’s one of the results of a survey by the Peanut Labs marketing team at Research Now.

The survey asked questions of more than 1,000 gamers to understand how consumers think about four major esports titles. The survey focused on both females and males ages 15 to 34. Esports is expected to grow from $696 million in 2017 to $1.5 billion by 2020, according to market researcher Newzoo. About 70 percent of that money is expected to come from advertising and sponsorships.

Call of Duty tops other esports in terms of unaided awareness, followed by League of Legends, Counter-Strike, and Minecraft. About 23 percent of fans can recall Call of Duty without memory aids. And 95 percent of fans recommend the game to their friends. 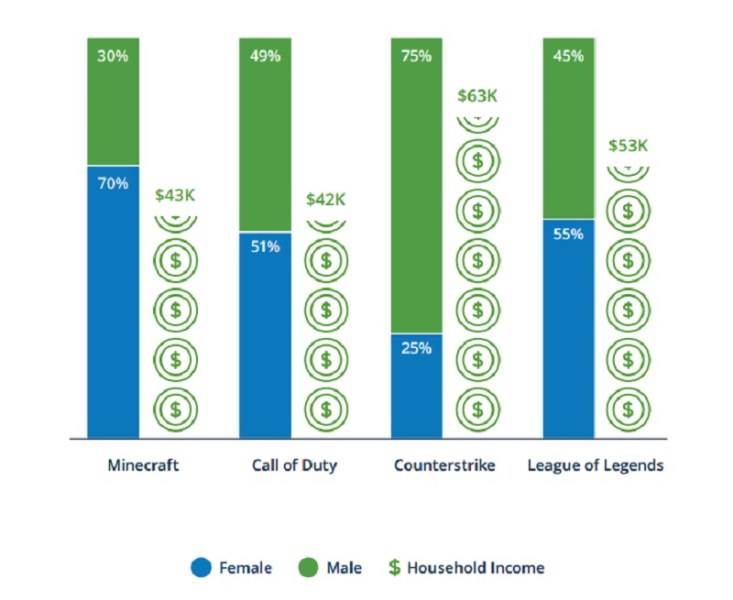 Above: Female players are 70% of fans of Minecraft, but only 25% of Counter-Strike fans.

55 percent of League of Legends fans love to win, but only one in three Minecraft players feel that way.

When it comes to engagement, Counter-Strike fans play for about 5.4 hours per month. Esports gamers and fans spend about $31 a month on esports.

60 percent of esports gamers and fans have tried a product because of in-game product placement.

The survey was conducted online from April 25 to May 1.