The NBA gets it. Or at least the Philadelphia 76ers do. The traditional sports basketball team made history in 2016 when it acquired two separate esports teams and merged them into Team Dignitas, one of the premiere professional teams in the fledgling world of competitive gaming.

Market researcher Newzoo predicts that esports will grow to a $696 million business this year, a number that helps explain why traditional sports teams are so interested in their digital counterparts. I caught up with Scott O’Neil, CEO of the Sixers, and Greg Richardson, chairman of Team Dignitas, for an interview about whether they believe that esports has become a mainstream pastime and business.

They say it is early days, especially when it comes to how much revenue comes in per fan compared to the NBA. We talked about the differences between the businesses, and how the 76ers will try to grow the entire business. 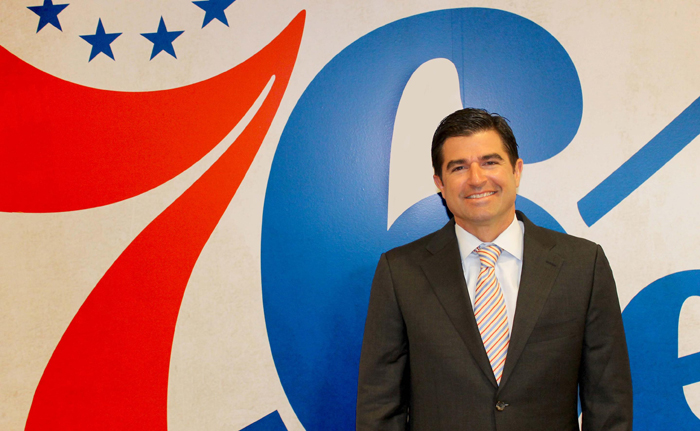 Above: Scott O’Neil, CEO of the Philadelphia 76ers.

GamesBeat: I wanted to get some of your initial high-level feeling for the esports market now. I’m starting to cover it more frequently. I covered this weekend’s DotA 2 and Call of Duty tournaments. I’m also covering at least one esports investment per week. It’s really picking up. I notice a shift happening from VR investments in the past couple of years. Now the esports investments are coming on strong.

Scott O’Neil: The one thing that’s most overwhelming, exciting, and interesting is just the incredible audience and fan support. That’s the first thing that caught my attention, and continues to keep the esports space interesting. I also, like you, follow the news quite closely. I have several friends now in and around the business. We seem to be the wily veterans, which is kind of funny, after being around about a year.

I have an incredible optimism for what’s coming. We’re still in the really early stages of turning this incredible audience into a thriving business. When you see companies like Riot start putting together plans for franchising, or what Activision’s doing with Overwatch, from my perspective you start to see the foundational pieces of a league that’s going to take the world by storm. That’s something we’re really interested in.

GamesBeat: Do you believe this is like the opportunity at the beginning of the NBA, then?

O’Neil: I certainly wasn’t there when the NBA started, but I can tell you that I have been around the early onset of leagues. I studied—you saw the rise of UFC coming almost out of nowhere, very quickly. It reminds me of that quite a bit. We’re fortunate that the franchise we’re a part of, Dignitas, has been around for about 13 years now, which is a lifetime in esports. We have some longevity and brand. But to me, when you see this kind of audience, and the type of passion you see, both digitally and now at events, you can’t help but think that the world is taking notice.

We’ve seen it on our own. Whether it’s Dell or Mountain Dew or Buffalo Wild Wings, these incredible brands have come around, some really non-endemic brands, pop-culture brands coming into the space through us so far. We’ve seen interesting corporate support coming in. Digitally, we have this incredible deal with Facebook. We’re the first to announce the deal with Facebook. This is very quickly becoming part of the fabric of American sports. If I’d said that five years ago you would have laughed me off the phone. But esports is here to stay. We’ve just scratched the surface in terms of the impact and influence it’s going to have on the American sports business and culture. 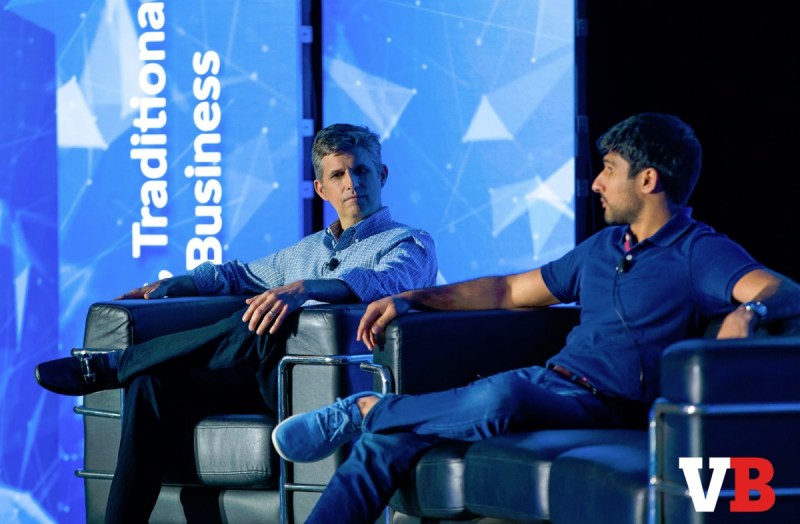 Above: Greg Richardson, chairman of Team Dignitas (left), and Akshay Khanna, vice president of strategy at the Philadelphia 76ers.

GamesBeat: It seems like the hard trick now is how much to invest ahead of the revenues coming in. How do you look at how to value the space, value teams, and make good decisions?

Greg Richardson: One thing we look at right now is the disparity in how much money is being spent by some of these fans we have in esports, relative to what they’re spending on their NFL or NBA habit. I don’t know if you’ve seen some of these numbers, but in the United States last year it was $75, the average spend of the American sports fan against their favorite stick-and-ball sport. The number for esports was 72 cents.

Depending on your perspective as an investor, you look at this and say, “Wow, you have a massive audience that’s deeply engaged. It’s a great secular trend, where younger people are spending more of their time watching the world’s best video game players, and therefore this is all upside.” Or you can look at this and say, “This is scary. The scale of the audience is way ahead of where it is for money. How is this all going to work out?” We’re definitely more in the former than the latter.

O’Neil: Coming from a more traditional sports world, I can tell you that first of all, when you have operators like Brandon Beck and Marc Merrill over at Riot Games, you get a sense that you’re with executives that have built a tremendous track record of success, but also have a vision as to what could be. Second, closely parallel, whenever you fix the number of franchises and the demand is as high as it is, the valuation will go up. That’s basic economics.

We see this quite a bit in traditional sports. You see what’s happened to NFL franchises, to NBA and NHL franchises as well. You have an incredible audience. You have almost ridiculous, uncappable demand and fan passion. You have a limited number of franchises. You have a tremendous operator in Riot. That, at least from an investment perspective, or an investment thesis from our end, couldn’t be any more attractive.

GamesBeat: The number of fans seems like it’s adequate at this point. It’s a big worldwide audience. What’s the trick to getting them to spend as much as NBA or NFL fans do? They need more things to spend their money on.

O’Neil: You’re going to see an explosion of events. You’re going to see an exponential increase in the amount of merchandise, given the affinity, that’s bought and sold. We’re invested in our innovation lab in Philadelphia. We have a company called U Git Gud. It’s a training and development—it uses an algorithm to track all of your keystrokes every time you play League of Legends. It gives you a read and report on where you’re strong, where you’re weak, and how you can get to the next level. Then it provides instructional videos from pros on the big areas you need to improve.

That’s just a small example. There’s an ecosystem here that clearly has money. They’re playing online. They’re mostly playing “free” games, but they’re putting money into those games. The demos and psychographics and social network numbers are unbelievable on this audience. Now the ecosystem just has to be built around them. We’re starting to see it happen, like with BAMTech investing in the broadcast rights. But I think there will be cottage industry after cottage industry building around this ecosystem to provide opportunities for those fans and give them more of what they’re craving. 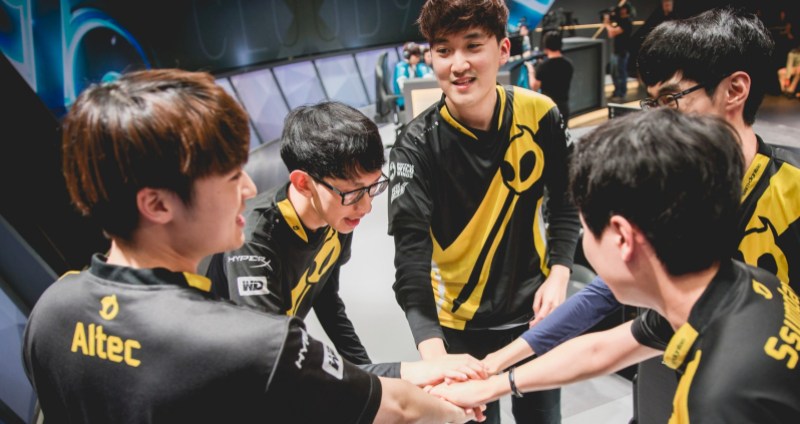 Richardson: There’s a couple elements worth talking about. If you look at traditional sports, broadcast is a meaningful part of the revenue mix. We’re in the really early days of the leaders in terms of streaming live esports events seeing the same kind of monetization as their peers in the terrestrial television space. First of all, getting that traction, it’s about being patient. It’s not that dissimilar to selling sponsorships for the team.

It reminds me of when I was at Elevation and made the investment in Facebook early. There was a certain maturity of understanding what a social network was and how advertising was going to work there that the big brand names had to get through. We’re seeing that, as Scott mentioned, with Buffalo Wild Wings and Mountain Dew and others we’re working with. But it’s going to take a while for them to weigh in as heavily as they do elsewhere. They’re interested and intrigued. We just have to be patient and thoughtful about it.

The key bit of news here, and the catalyst to having monetization become meaningful in esports, is the permanence and the long-term vision that folks like Riot have when it comes to creating something stable for fans, for team owners, for players. It ends up being investable not just for us as team owners, but for broadcasters and sponsors as well. As they lay that out and the franchising kicks off, you’re going to see that be a meaningful catalyst for monetization.