On Saturday night, Team Korea was on the verge of going home. Team Thailand trounced them in Tencent’s Arena of Valor World Cup semifinals, winning 3-0. But on Sunday, the squad from South Korea had a chance for redemption as they knocked out Team Chinese Taipei and earned a spot in the grand finals. They were once again up against Thailand, and this time they triumphed, taking home the first-place prize after a tense struggle that went right down to the last game out of seven.

Tencent’s first-ever North American tournament for its multiplayer online battle arena mobile game was lavish, renting out Los Angeles’s historic TCL Chinese Theatre. In addition to high production values, everything was set up in a way to make it easy for viewers to follow along.

Each five-player team had digital displays behind them, showing which character they’d selected to play. In front of them, screens showed off their logos as well as whether they were playing red or blue, colors that determine if they’re starting in the north quadrant of the map or the south. A giant projection screen as well as smaller TVs throughout the theater made sure everyone could see the action. And two shoutcasters provided live commentary to explain what was happening.

An event that puts streaming first 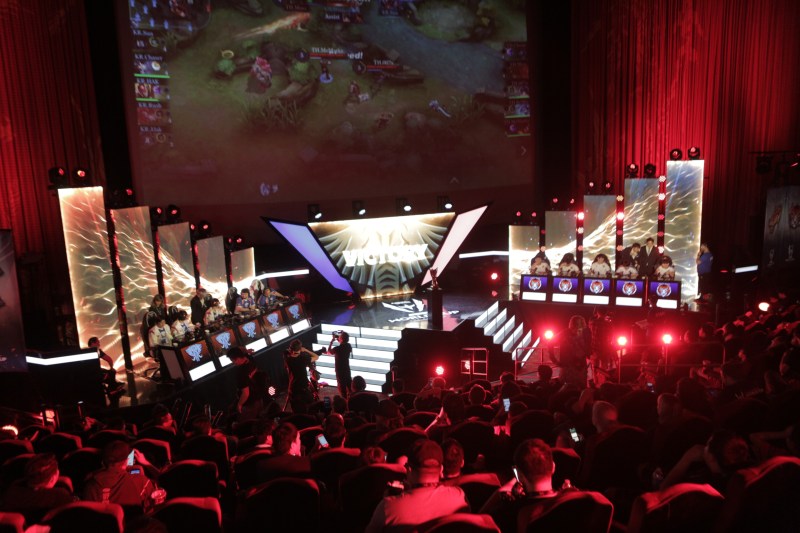 Above: Team Thailand and Team Korea battle it out at TCL Chinese Theatre.

About two-thirds of the venue’s seats filled up with fans who cheered, shouted encouragement, and banged thundersticks together. During the grand finals, some fans yelled out in Thai. In rebuttal, South Korean fans started up a chant often heard during soccer matches. But the event’s slick production and ornamentation weren’t necessarily for the folks at the theater — Tencent expected that most of its audience would be abroad and watching via livestream.

“The biggest group of our audience is in Asian countries. We wanted to make sure that they can participate in the event,” said Tencent America’s director of esports Ramon Hermann in an interview with GamesBeat. “That’s why we focused very heavily on the streaming experience, to bring the game to their homes and let them follow what’s happening. But we also wanted to acknowledge the fact that the game is now available in North America.”

Arena of Valor is the North American and European version of Tencent’s mobile MOBA Honor of Kings, which is a global sensation with more than 200 million monthly players. Since launching in the West in December with a new roster that includes DC Comics characters, Western audiences have been slower to pick it up; it just passed 1 million downloads on iOS and Android earlier this month.

This hasn’t deterred the Chinese tech giant as it presses forward with its esports strategy. Though Asia has embraced mobile esports, the West still gravitates toward PC games. The biggest attempt at bringing competitive gaming to phone screens is from Super Evil Megacorp, who has staged a few competitions for its MOBA Vainglory. But despite its best efforts, it hasn’t caught on to the same extent as massive esports like Dota 2 or League of Legends. In March, Super Evil Megacorp inked a deal with Alibaba to feature its game at the World Electronic Sports Games championship tournament in China.

Hermann says that the fan response to Arena of Valor has “exceeded [their] expectations,” particularly when the developer brought its playoffs to this year’s Electronic Entertainment Expo. He says that awareness is the key obstacle to getting Western players into competitive mobile gaming.

“If you look at the popularity of the game and its esports offerings in China, in Thailand, and in Vietnam, it’s already surpassed what’s happening on PC. It’s the most watched esports title period,” said Hermann. “That makes me very confident that we’re on the right track with what we’re doing. I believe it comes down to awareness, to letting players know that this is a legitimate way to be competitive in a genre that you love. It’s just on a different platform.” 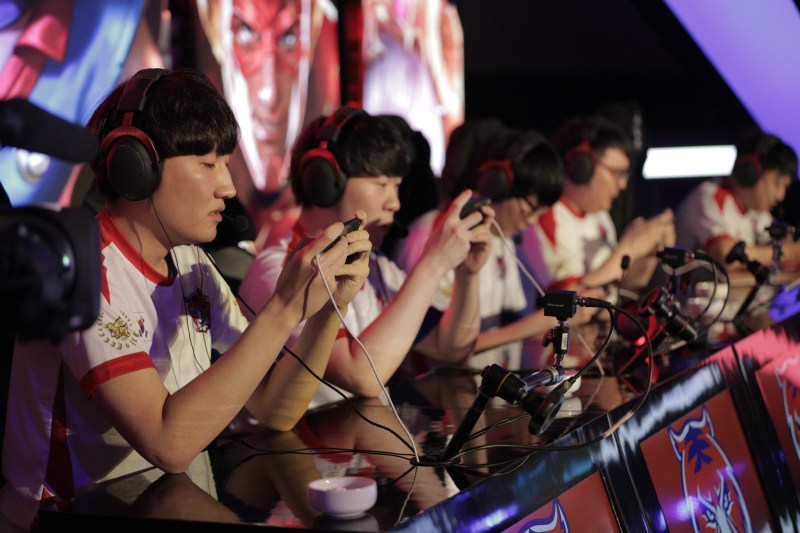 Above: Team Korea during the grand finals of the Arena of Valor World Cup.

In Asia, Tencent launched its King Pro League tournament in 2017 for Honor of Kings. For Arena of Valor, Taiwan has one of the few pro leagues — Garena Challenger Series, or GCS. That’s where Team Chinese Taipei cut its teeth before advancing on to the World Cup.

Team Chinese Taipei’s Benny Chen was head of a mobile communications company when he found out there was an Arena of Valor amateur league. He registered for it and took first place. After that, the squad formed in January and went on to win at GCS, beating out teams from Hong Kong and Macao.

At the Arena of Valor World Cup, Chen and his teammates landed in third place after getting knocked out by Team Korea. Along with the fourth-place squad, they took home $50,000 of Tencent’s $550,000 prize pool.

“I think the composition was good, but we didn’t perform as well in the game as our opponents [Team Korea],” said Chen through a translator in an interview with GamesBeat. “I think we lost in terms of our gathering speed, and also the timing of when to start a team fight. We’d already lost two games prior to the third match, so we weren’t as aggressive as we should have been. We were holding back too much. We weren’t brave enough to venture forward and get more kills.”

“There were two teams, and of those two teams — we were all people who felt pretty close with each other, felt like we matched up and synched with each other. So we made a team,” said Team Korea’s Hoyeon “Rush” Lee through a translator in an interview with GamesBeat. “That’s how we got here.”

Lee says that a lot of the best-out-of-seven grand finals against Thailand was the mental game — it was a tense match, with Korea coming strong out of the gates and winning the first two games. Thailand quickly tied up, though, with one particularly devastating match where Korea didn’t get a single kill. It was also the shortest game in the entire World Cup — seven minutes and twelve seconds.

“For eight months we’ve been preparing for today, and at that point, we said, after all that preparation, are we going to lose now? That’s how we were able to bounce back,” said Lee. “We still lost the fifth game, but we felt more comfortable, because we wanted to show the best of our abilities to everyone. This is where we’re at. We were able to show that to everyone. Through that resolve – let’s show everyone that we’re trying our best against a very strong Thailand team, the strongest team – we were able to win game six.”

Lee said that if Team Korea had won against Team Thailand during the semi-finals, it might not have won the grand prize. Losing to Thailand the first time around jogged their memories and reminded them of a strategy that they had forgotten about.

Now that the squad has the World Cup under its belt, it has its eyes on the GCS in Taiwan. But first, celebrations are in order. In addition to winning first place at the World Cup, which comes with a $200,000 prize, Lee was also singled out for the MVP award.

“When I first got it, I was very thankful for my teammates,” said Lee. “I was about to cry. For eight months we’ve been training really hard. There are no tournaments in Korea, so after all that hard work, we got here. I was in tears.”