I took a tour of a very different kind of place in Santa Monica, California. It is still under construction, but it will be known as the Alienware Training Facility for Team Liquid.

We got an early look at an 8,000-square-feet facility that is being refashioned into a state-of-the-art esports training location for multiple teams under the Team Liquid umbrella. This is the kind of place where Team Liquid hopes to breed stars in the young industry of esports, which is expected to grow to $1.5 billion to $2.5 billion by 2020. If esports grows as expected, you’ll see a lot more of these kinds of state-of-the-art training facilities for pro players who stare at screens all day.

Team Liquid already has 13 teams and more than 70 professional cyberathletes playing games, such as Counter-Strike: Global Offensive, Dota 2, Hearthstone, Heroes of the Storm, League of Legends, StarCraft II, Super Smash Bros., and Street Fighter. The Dota 2 team took home a $10.8 million grand prize for winning the Dota 2 Championships in August. And now, the company wants to use its new building to train its teams for high-stakes competitions. 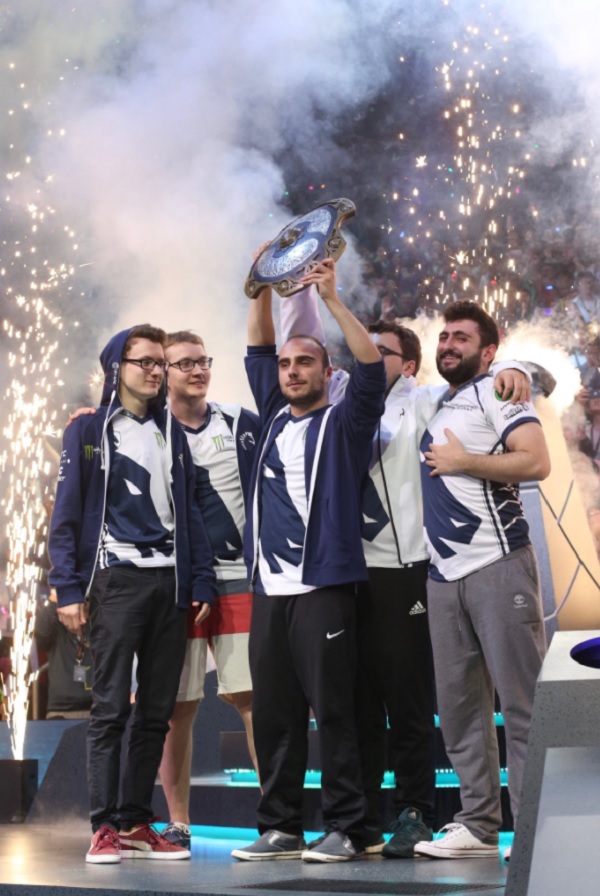 Team Liquid was started in 2001 in the Netherlands by Victor “Nazgul” Goossens, and it was known for its StarCraft players. It added more teams over time, and in 2015, Steve “LiQuiD112” Arhancet joined as co-owner and co-CEO. Then, in September 2016, Team Liquid sold control to Axiomatic eSports, an investment group that included Golden State Warriors co-owner Peter Guber, former AOL executive Ted Leonsis, basketball Hall of Famer Magic Johnson, and AOL cofounder Steve Case.

Team Liquid has a facility in Utrecht, the Netherlands, for a number of its 13 teams. As esports became more popular, sponsors like Alienware moved in and enabled the company to spend more money on its training in North America. Mike Milanov, chief operating officer, took me on a tour of the place, even as workers were installing a lot of the gaming computers and amenities. 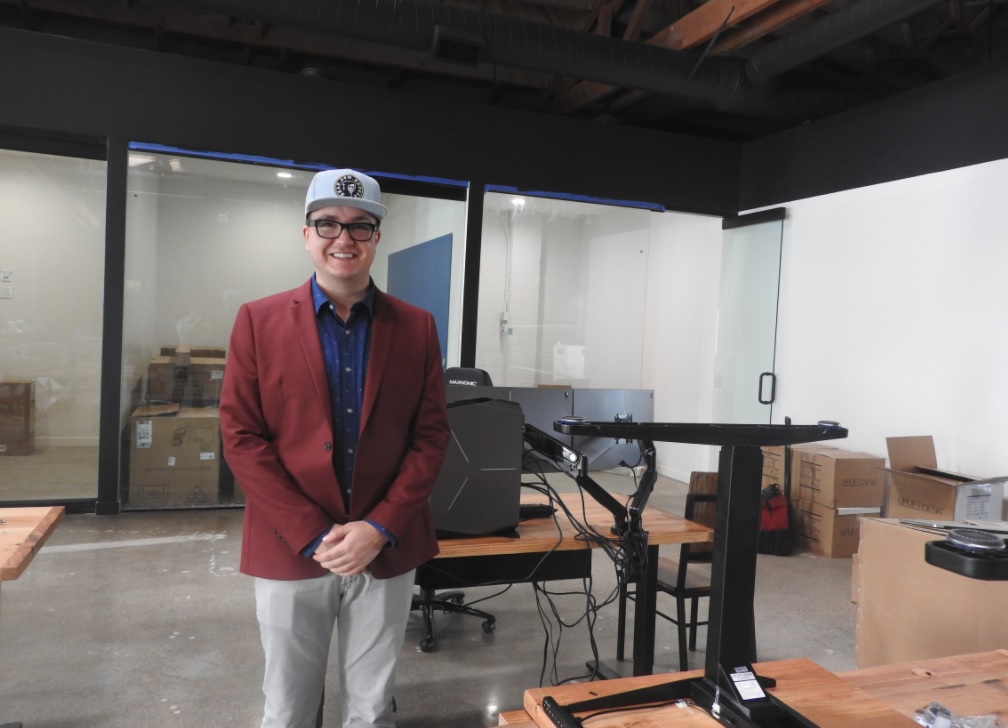 Above: Team Liquid chief operating officer Mike Milanov next to his own desk at the new facility.

“After 55 facilities, this one spoke the most to me,” Milanov said. “We’re not quite ready for tours yet since we’re perfectionists. My vision for it is only just coming to life. The idea was to cram it with operational technology. Have our team here. Have our agency here. It’s a technology-first approach to esports development.” 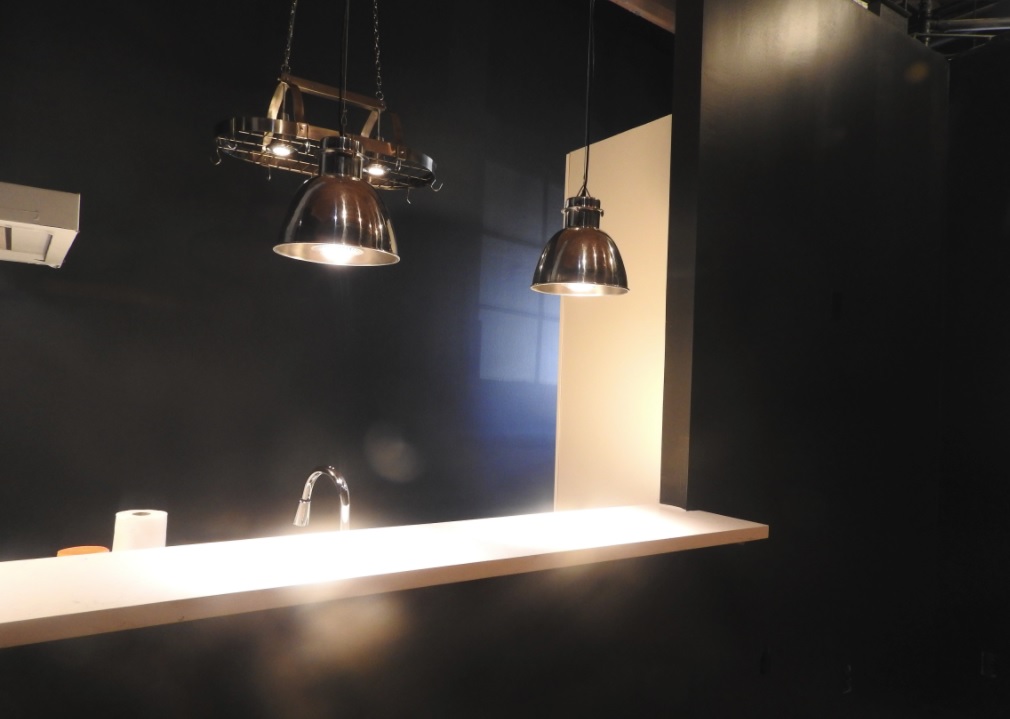 Above: The kitchen at the Alienware Training Facility will have its own chef.

The Santa Monica location has a dorm a couple of miles away, and the athletes are kept on a tight regimen. They are encouraged to go to the gym in the morning and come in at a regular time for serious practice. They have their own full kitchen, a chef, and personalized meals. Custom wood benches and tables will seat about 20.

Yes, the athletes who generate millions of dollars for the team are going to be spoiled. But they’re not going to be eating pizza all of the time. A nutritionist will be available to make sure that they keep the trans fats down and eat healthily. The team will also have a sports psychologist on hand. 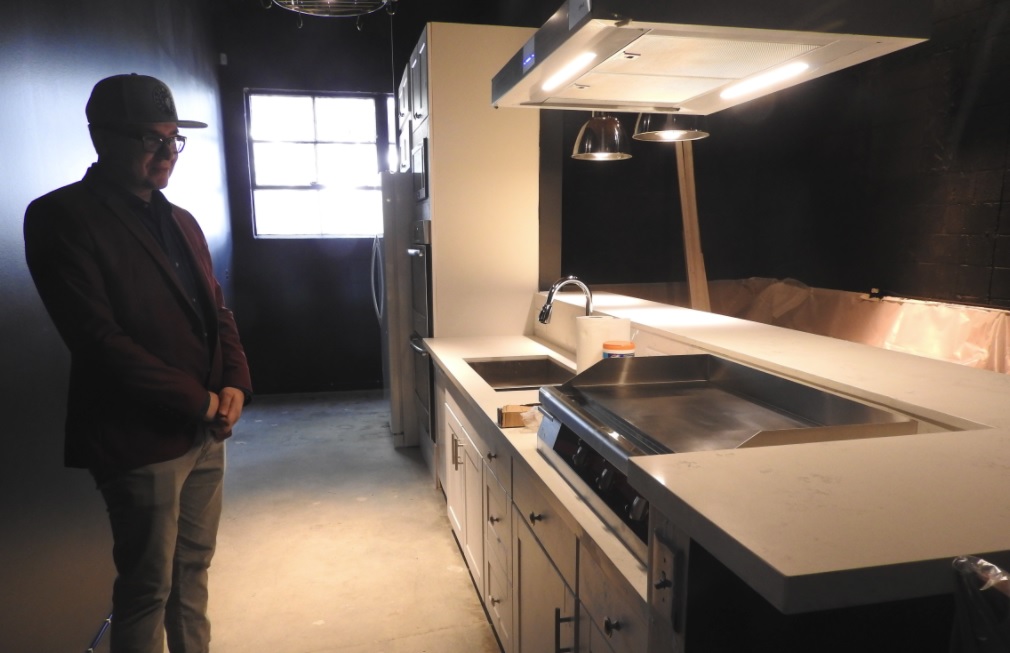 Above: The kitchen at the Alienware Training Facility.

“We don’t have cupcakes or muffins or greasy foods because we have to keep their brains energized,” Milanov said.

The place has bathrooms but no showers.

“We’re the mom, the landlord, the agent, the publicist, and everything else,” Milanov said. “It’s intense to train for six to eight hours. We want to feel like it is super high-paced, concentrated training, and we want them to relax at home.” 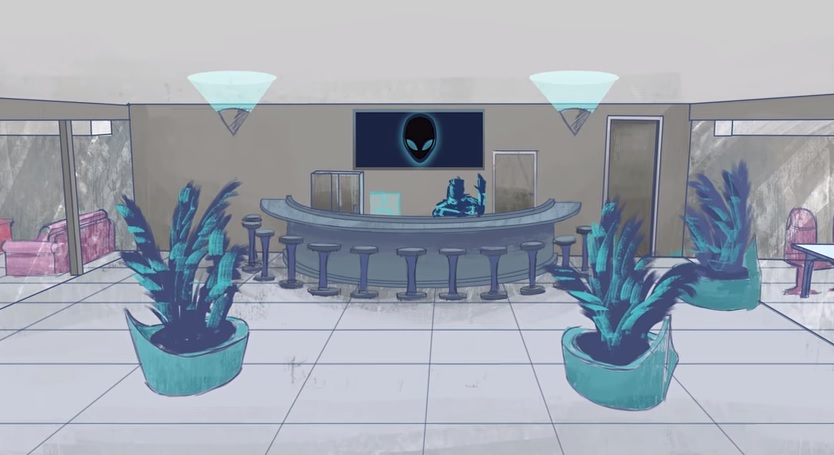 Above: The Alienware bar at Team Liquid’s training facility.

At the entrance, visitors will be greeted by the Alienware bar, with big screens that can show what’s happening in the world of Team Liquid.

“We’ll have stools and a bar where you can watch Twitch or get some energy drinks,” Milanov said.

The partnership with Alienware is in its sixth year, and the company provides the gaming hardware for the whole facility, including a bunch of 24.9-inch 4K monitors and Alienware gaming PCs, including some Area 51 desktops.

Three “war room” offices will be themed with Dota 2, Counter-Strike, and League of Legends motifs. 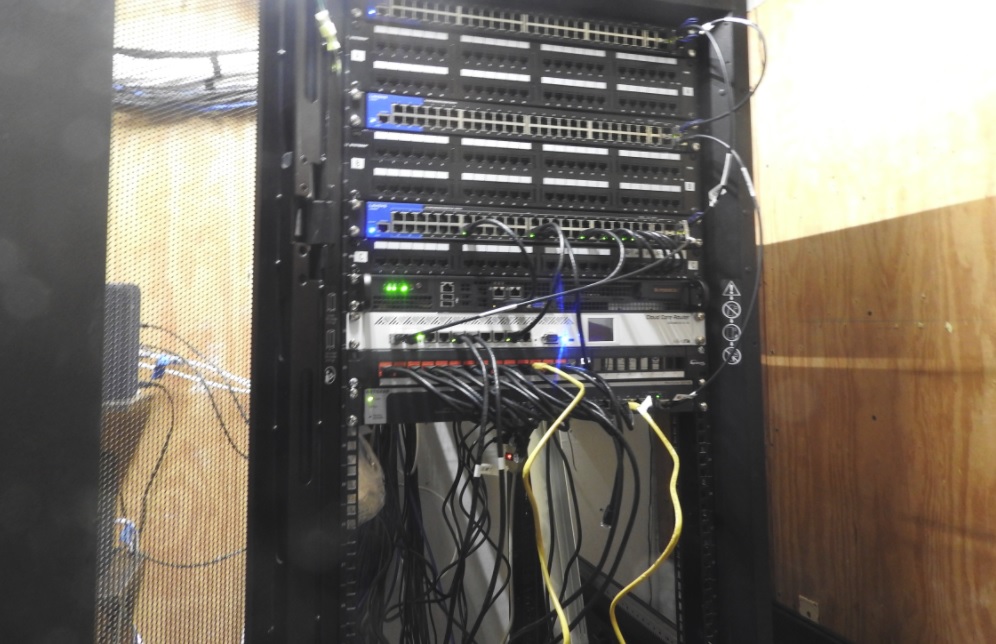 Above: The server closet for Team Liquid.

The place has its own fiber-optic cable connection since the players have to be online just about every second that they’re training. Frontier agreed to bring a fiber line directly into the building to the team’s server closet. 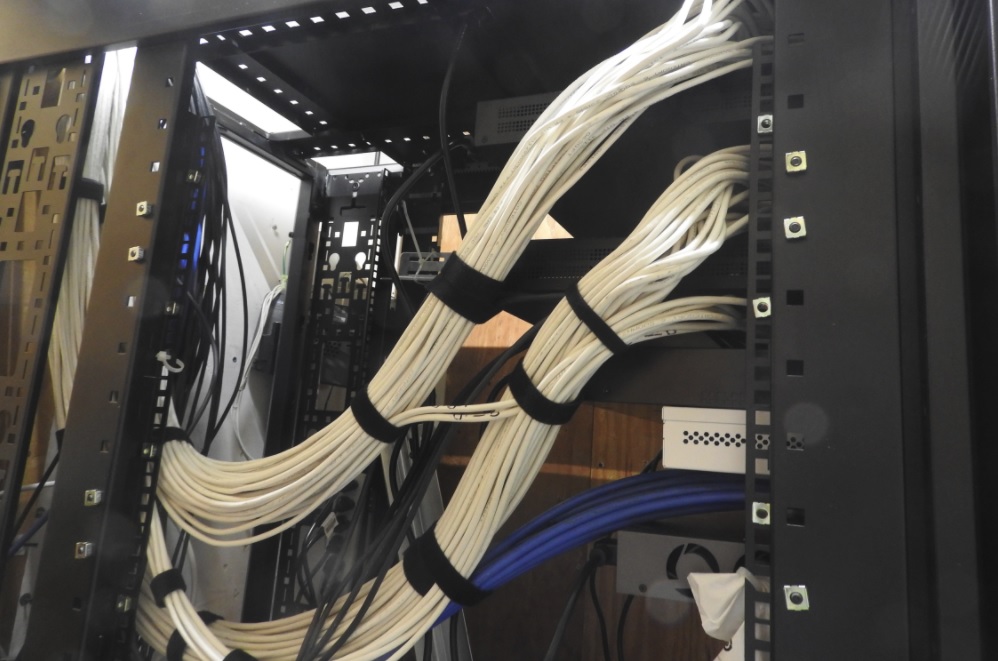 Above: Fiber-optic cable comes directly into the Team Liquid facility.

The 12-unit server can store 100 terabytes of data, and it has 10-gigabit networking available throughout the space. The ethernet category 6 ports in the walls link to the server, and they have DisplayPort converters in them, so a coach can switch over to the player screens across three monitors. 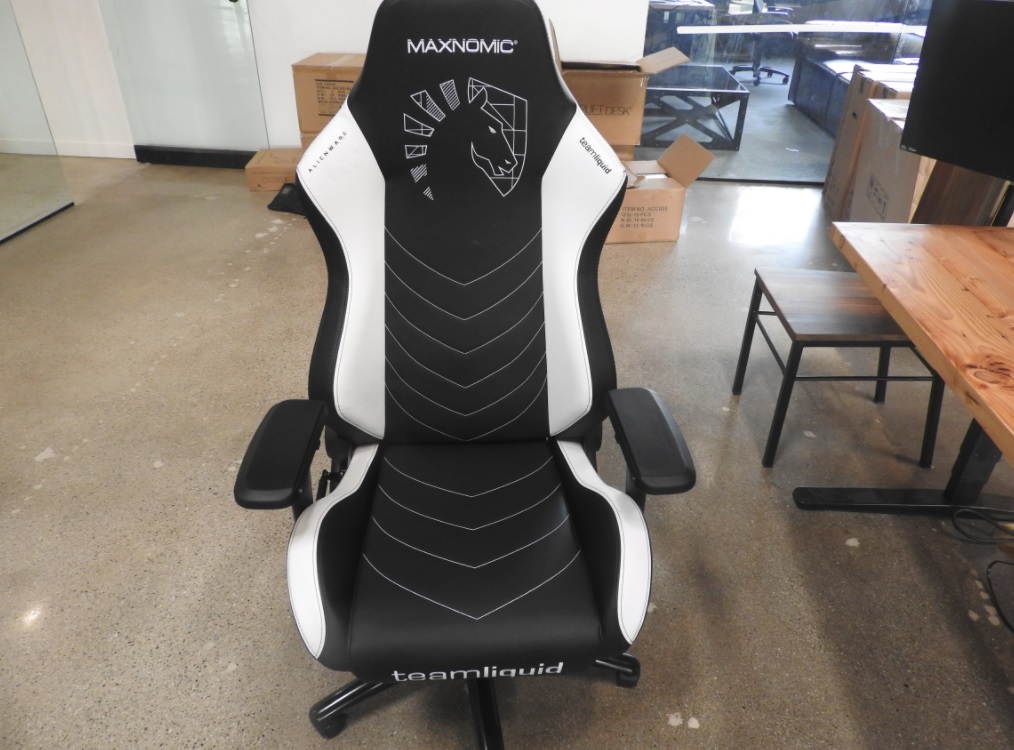 There are custom wooden desks where employees can either sit or stand. There are some fancy chairs from China’s Maxnomic that carry the Team Liquid brand. 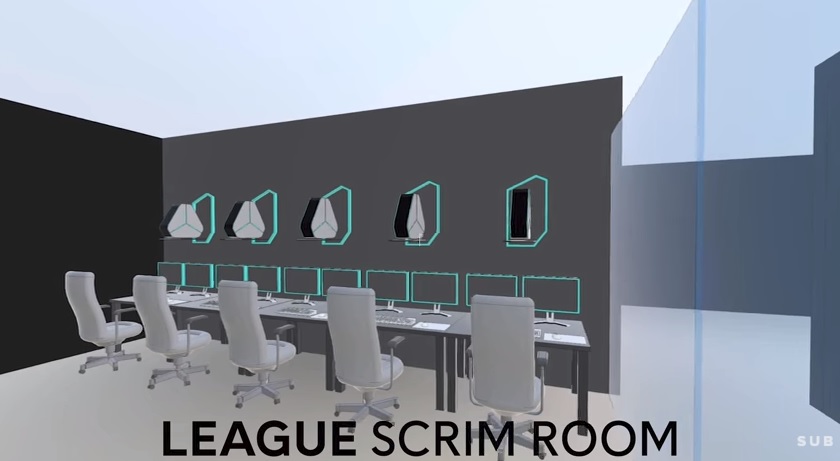 Above: The scrimmage room for League of Legends. 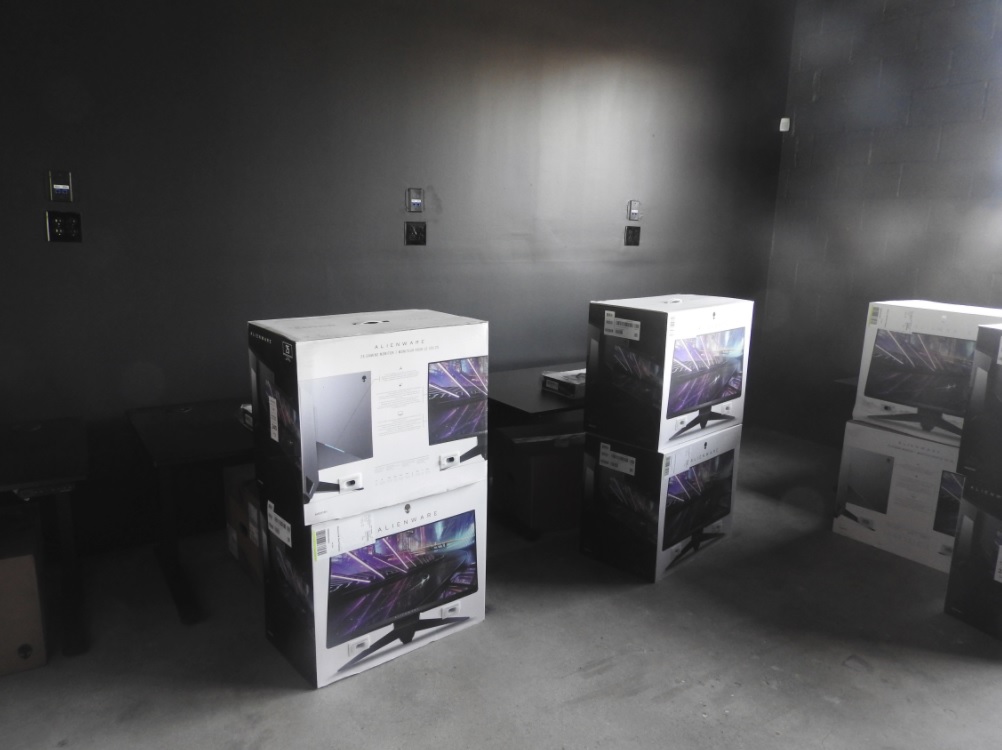 Above: One of the training rooms for Team Liquid.

On top of that, Team Liquid formed its own production company in 2015. 1UP Studios has eight people who produce video collateral for Team Liquid. 1UP Studios will also be housed within the new esports training facility. The studio has $150,000 worth of Sony camera equipment and other gear, and the workers will be able to use the massive computing resources to work on media for Team Liquid with minimal delays related to bandwidth or computing limitations. Most of the computing power in the place will be used by 1UP Studios.

The Counter-Strike team has a space where the coach can pace back and forth and look over the shoulders of the players. 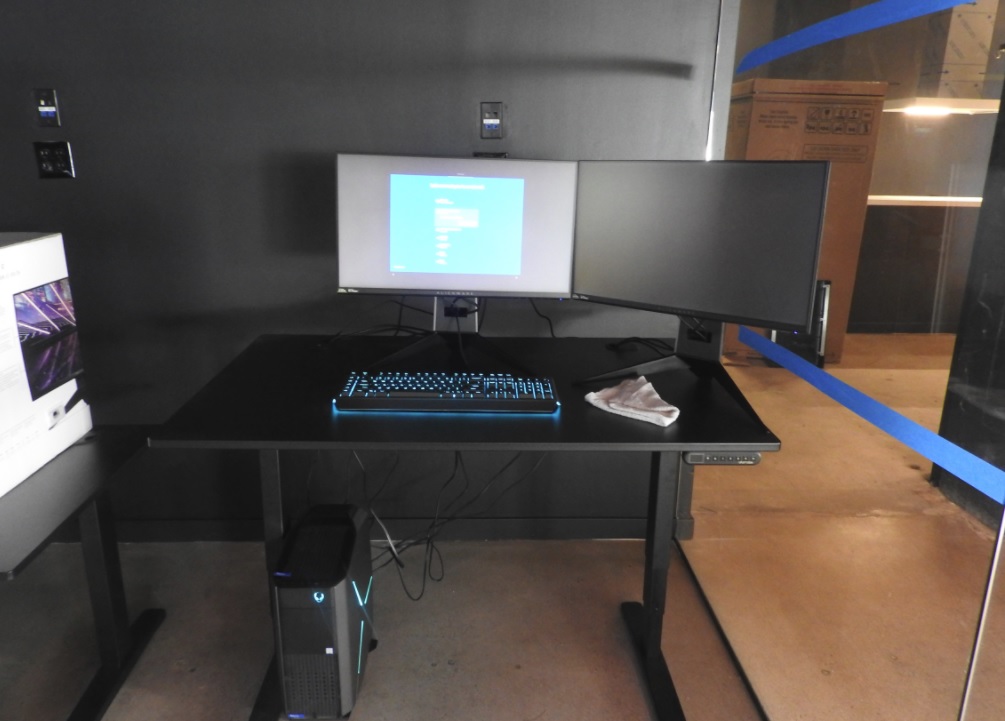 Above: A workstation in Team Liquid’s training facility.

[One of the coaches] “wanted to replicate what happens on stage in our own facility,” Milanov said.

Milanov hopes that the facility will turn into a competitive advantage in the Darwinian esports industry. If it works well, Team Liquid will build another training facility in the Netherlands.

“It’s all about leveling up the training environment and the work-life balance, so we can professionalize the industry,” Milanov said.