Esports will continue to be smaller in revenues than traditional sports, but it is rapidly gaining in terms of numbers of spectators. Once those spectators start spending like traditional sports fans, then advertisers will shift more money to esports and the industry will continue to gain momentum. And that’s why we’re seeing so many new investments in esports startups.

Newzoo said brands will be responsible for $694 million of the revenues in the esports industry, or 77 percent of the total market in 2018. This will grow to $1.4 billion by 2021, representing 84 percent of total esports revenues in that year.

And Newzoo said the global average annual revenue per esports enthusiast will be $5.49 this year, up percent from $4.58 in 2017.

“As a consumer phenomenon, esports continues to grow its huge base of passionate fans across the globe,” said Peter Warman, CEO of Newzoo, in an email. “As a business, esports is now entering a new and critical phase towards maturity. Big investments have been made, new league structures have been launched, sponsorship budgets have moved from experimental to continuous, and international media rights trade is starting to heat up. At the same time, player salaries have soared and the esports ecosystem and viewership hours still very much rely on a select number of globally operating teams and game franchises. Profitability and return on investment is, for many organizations at the heart of the esports economy, a challenge.”

The League of Legends World Championship was the most watched event on Twitch in 2017 with 49.5 million hours. It also generated $5.5
million in ticket revenues. 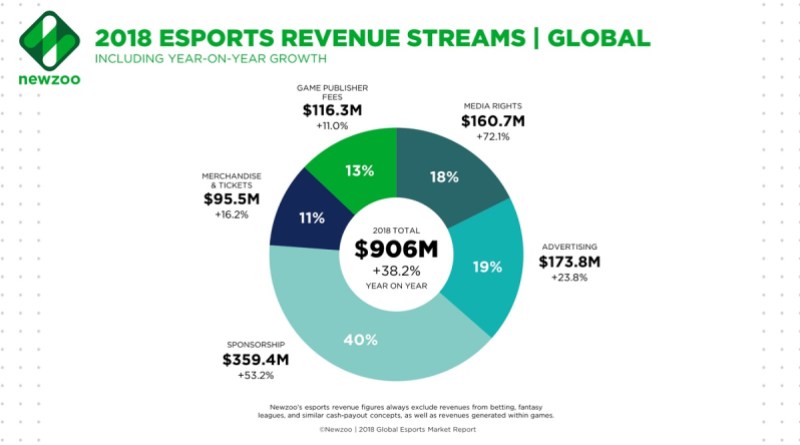 “An industry survey performed by Newzoo late last year found that the majority of respondents from teams expect esports to take another five to 10 years to mature fully as a business,” Warman said. “The same research showed that brands and agencies expect the ecosystem to be fully professionalized in three to five years. This illustrates the current status of the market: great expectations from outside and more conservative views from people within. This year will be pivotal in determining the pace at which esports becomes the global multi-billion-dollar business we all envisage. This year, we anticipate global esports sponsorship and advertising revenues to surpass half a billion dollars. Considering the media exposure esports has created, this is still a relatively small amount.”

Newzoo started surveying the esports market with data on six countries in 2009, and it now covers 28 countries and more than 60,000 consumers to generate its annual report. Newzoo defines industry revenues as the amount the industry generates through the sale
of sponsorship, media rights, advertising, publisher fees, tickets, and merchandising. The revenue numbers exclude prize pools and player salaries, which are both considered costs of doing business. Newzoo also doesn’t count revenues from online gambling and betting related to esports (via companies such as Bwin or Unikrn). And it doesn’t count investments in esports startups. 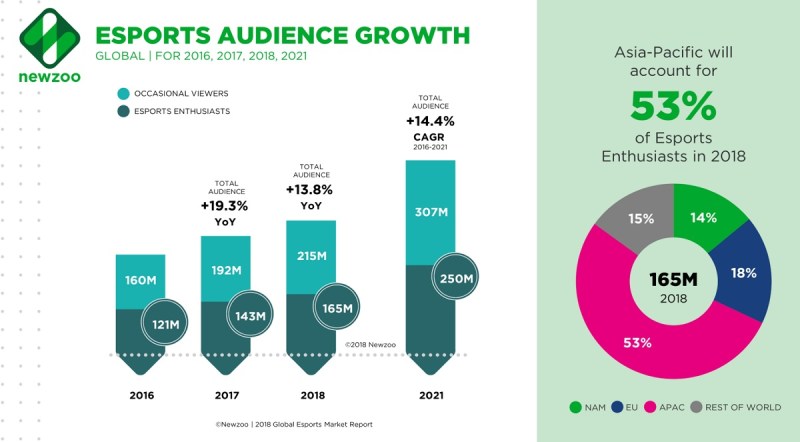 Above: Newzoo expects the total esports audience to grow to 557 million in 2021.

Sponsorship is the highest grossing esports revenue stream worldwide, contributing $359.4 million in 2018 compared to $234.6 million in 2017. Growing with a compound annual growth rate (CAGR) from 2016 to 2021 of 49.8 percent, media rights is the fastest-growing revenue stream. By 2021, media rights revenues will more than double compared to 2018, making it the second-largest generator of esports revenues globally, Newzoo said.

The number of people who are aware of esports worldwide will reach 1.6 billion in 2018, up from 1.3 billion in 2017. China will contribute most to global esports awareness, with 468.3 million people. The increasing exposure of esports as a mainstream entertainment industry is driving the growth in awareness in most regions.

Newzoo identified 10 areas as important for the development of esports. The first area is franchising, such as the creation of the leagues for League of Legends and Overwatch. Another area is the importance of winning the hearts of local fans through regional team competitions. Newzoo also sees important scouting opportunities with the development of collegiate esports. It also views the creation of profitable teams as a necessary part of industry maturity.

The market researcher also wants to see mobile esports develop a real identity, and it foresees game-changing technology for esports in the form of blockchain and cryptocurrency. Esports also has a chance to expand viewership through new formats and franchises, such as new takes on competition such as battle royale, popularized by PlayerUnknown’s Battlegrounds.

And Newzoo expects power to shift within the esports economy among teams, organizers, and publishers. It expects media and telecom companies to move in through acquisitions, and it expects associations and governments to eventually play a role in governance.