Game market researcher Newzoo reported that the global game market will hit $116 billion in revenues on, up from 10.7 percent from a year earlier. The latest numbers are up $7.1 billion from Newzoo’s previous estimate.

Mobile gaming revenues for 2017 were revised upward the most, from $46.1 billion to $50.4 billion. From a regional perspective, the adjustment was mainly driven by new 2017 revenue figures for China and Japan. Esports is also coming on strong, with total esports revenues potentially hitting $2.5 billion by 2020, or about $1 billion more than Newzoo previously estimated.

With the growing popularity of esports games will see further growth, surpassing the $130 billion to $150 billion sports industry within three or four years from now. By 2020, games will hit $143.5 billion in revenues on a global basis. 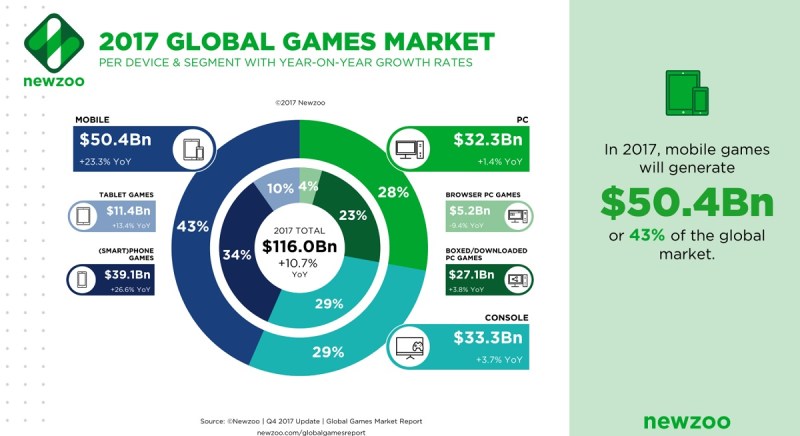 Above: Mobile has reached $50.4 billion, making it the biggest part of the game industry.

During the first three quarters of the year, game revenues came in higher than expected. Newzoo previously thought that revenues would be $108.9 billion this year.

The market for PC gaming showed surprising strenght as well, as Newzoo revised the estimate upward from $29.4 billion to $32.3 billion.

Console gaming will end the year slightly lower than anticipated at $33.3 billion, but still showing a healthy year-on-year growth of 3.7 percent. The Chinese games market is expected to end the year at $32.5 billion and Japan will reach $14.0 billion. Newzoo comes up with its estimates and actual results based on continuous tracking of the game revenues reported by more than 100 public companies.

This year’s results show that the game market is consolidating, with the highest-grossing companies accounting for an ever-greater share of the global games market. Public companies will represent more than 80 percent of global game revenues this year, up from around 75 percent in 2016.

“We expect the current growth of the global games market to continue with a compound annual growth rate of 8.2 percent from 2016 to 2020.

“On mobile, this is particularly true in China and the rest of Asia but also in the West, where competitive mobile titles are increasingly in the top grossing charts,” the company said. “This has renewed confidence among the biggest Chinese publishers to bring their games to the West. Tencent’s Arena of Valor is the obvious example. The abundance of new mobile battle royale titles sparked by the success of PlayerUnknown’s Battlegrounds on PC could add to the rise of competitive gaming on mobile in the West.” 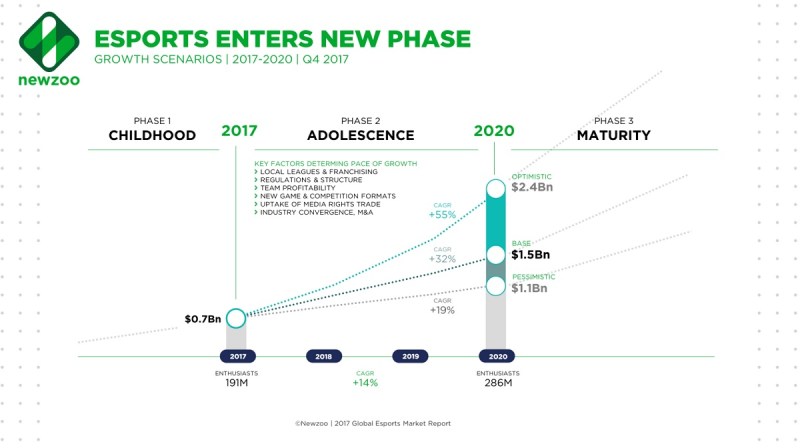 Above: Esports could be $2.5 billion by 2020, far above previous estimates.

Newzoo said the next couple of years will be crucial to how fast competitive gaming grows into a multi-billion-dollar business.

“The key determining factors are the success of local leagues and the franchising approach, the implementation of regulations, the arrival of new game formats and competition, the uptake of content rights sales, team profitability, and the impact of industry convergence involving traditional media, entertainment, telecom, and sports companies,” Newzoo said.

Depending on how these factors play out in the coming year or two, esports’ growth could accelerate and reach $2.4 billion in 2020 in an optimistic scenario, almost $1 billion higher than the base scenario of $1.5 billion.