Multiplayer online battle arena games like League of Legends and shooters like Counter-Strike: Global Offensive dominate the esports scene in the West, but China has a burgeoning mobile esports scene that has already seen some successes, according to a report by market researcher Newzoo. And these include games like Tencent’s MOBA Honor of Kings as well as casual offerings such as Giant Interactive’s Battle of the Balls, which has drawn over 300 million players globally.

In the report, Newzoo finds that PC and consoles will likely continue as esports strongholds in the West. However, viewers have demonstrated an appetite for mobile esports, such as Supercell’s Clash Royale. It was the most viewed mobile-only game on livestreaming platforms Twitch and YouTube Gaming in the fourth quarter of 2017, racking up 6.3 million and 15.8 million viewership hours respectively. Collectively, folks watched 1.3 million hours of Clash Royale tournaments in 2017.

These numbers are still low compared to PC esports in the West. Valve’s Dota 2’s biggest tournament, The International, drew over 5 million concurrent viewers. And in 2016, Riot Games reported 14.7 million viewers at its peak during the League of Legends World Championship.

But in China and Asia, mobile esports might have a chance. Twitch viewers watched 122,000 hours of the Clash Royale Crown Championship World Finals livestream last year, and 5,000 folks attended the event in London. The 2016 Battle of the Balls Global Finals in Shanghai attracted more attention from Chinese fans. 13,000 live audience members attended and viewers online spent a collective 3.6 million hours watching the broadcast.

Battle of the Balls is a casual title, featuring gameplay similar to the web game Agar.io, but China also has a strong interest in core mobile esports. It’s the second largest market behind the U.S. for Super Evil Megacorp’s mobile MOBA Vainglory, contributing to 20 percent of that title’s revenues. And Honor of Kings is massively popular, with over 200 million users. The Chinese tech titan’s 2016 King Pro League tournament for its hit game drew over 70 million viewers, rushing past Riot’s record for its LoL event. 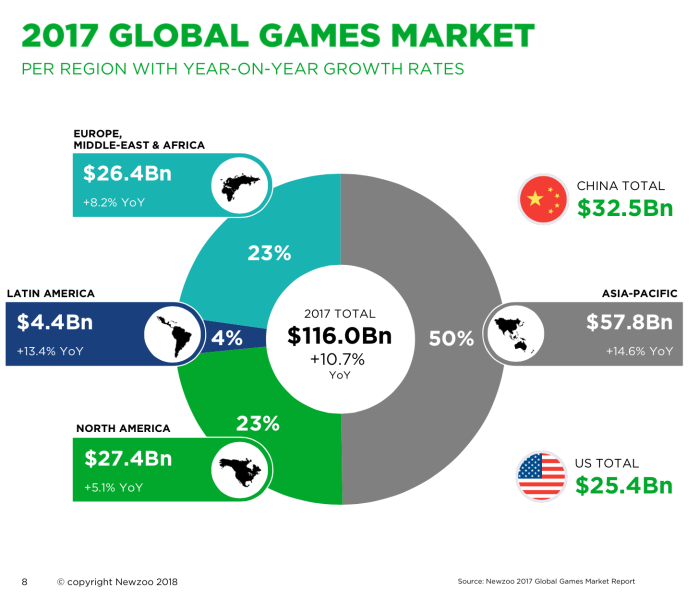 Newzoo estimates that the global games market will reach $143.5 billion by 2020. Mobile will take up 41 percent of total games revenue, totaling $72.3 billion alone. Much of that will be thanks to Asia, which contributed to 50 percent of 2017’s total games revenue of $116 billion. By 2020, the global esports audience size is predicted to grow to 589 million, and it’s likely that China and the Asia-Pacific region will be contributing to that significantly as well.

According to Newzoo’s report, mobile esports’ success may be a phenomenon unique to Asia-Pacific because of its attitude toward mobile. China is the largest smartphone market in the world and people’s mobile devices are the hubs of their daily lives. Chat facilitates everything, and Newzoo notes that most mobile games are connected either to WeChat or QQ so that players can check leaderboards and receive alerts for content updates. Because mobile is so seamlessly integrated into every aspect of life, perhaps fans see less of a divide between games on phones versus games on PC and consoles.

Though the U.S. hasn’t adopted Asia’s mobile-first culture, Tencent is trying to replicate its success in the West. It launched Honor of Kings under the name Arena of Valor in the West in December, and it will soon roll out a World Cup tournament for the game as well.