The Elder Scrolls: Legends is diving into esports with its first Master Series Championships, which will take place this weekend (August 9-August 10) at QuakeCon in Dallas. Players began the road to this event back in June, and the series whittled down contenders from over 800 to 16.

Bethesda’s digital card game takes place in the world of The Elder Scrolls role-playing franchise. It may not rake in as much money as Hearthstone, but it stands out from Blizzard’s juggernaut in a variety of ways. It uses a color-based system for building decks, but unlike Magic: The Gathering and others, you can build decks now from among three colors, not two, as of the recent Houses of Morrowind expansion. You fight in two lanes on the board, not just one. Its puzzle sets offer a different sort of challenge, giving you a hand of cards and presenting you a “solve in one turn” situation. And its draft system has solo play, so you can build decks against a group of nine AI competitors, making it one way to increase your card collection and learn new cards without facing other players.

It makes for a fun game that presents different questions than you’d find in a match of Hearthstone or even building a Magic: The Gathering — Arena deck. And it’s going to get a major facelift, a new developer, and a new platform — Nintendo’s Switch — in the coming months.But all of that is in the background as Christian Van Hoose prepares for The Masters Series, which offers a $50,000 prize pool and a winner’s share of $15,000. He’s the community manager for Legends and joins Bethesda’s vice president of public relations and marketing Pete Hines (this interview captures his passion for card games) as the card-slinger’s big cheerleader at the publisher. He was one of Legends’ big streamers, showing again the value of hiring passionate players (and sometimes critics) of your games. He hasn’t even been on the job five months, and he already finds himself helping Bethesda put on its first major esports event, going onstage at E3, and helping the game shift from one development house to another.How’s he doing with all that? He tells us in this edited transcript of our interview over email. 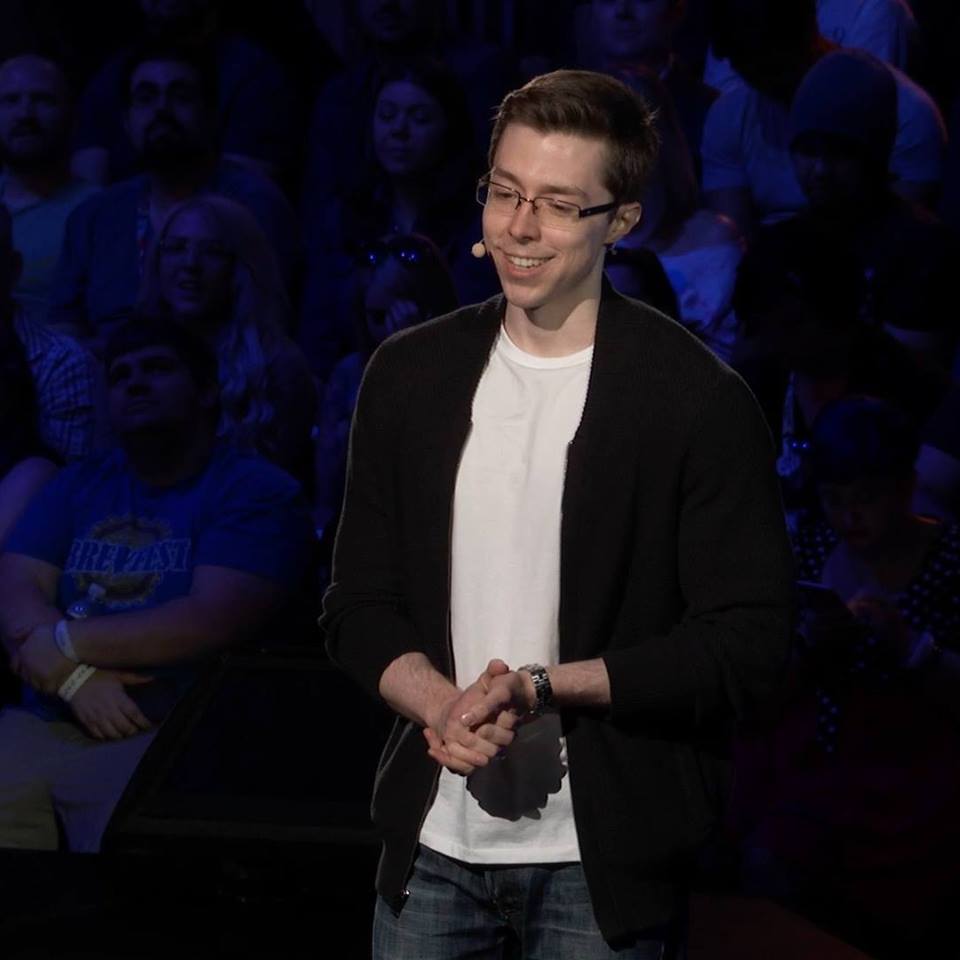 GamesBeat: Bethesda doesn’t have a lot of esports expertise. How do you create an esports scene?

Christian Van Hoose: I believe the most important factor in any esports scene is the game itself. I have always felt that Legends is a game that lends itself extremely well to high-level play and it has been awesome to watch the scene take shape over the past few weeks with the qualifiers. There has been a lot of intricate play decisions and exciting moments — and we’ve only scratched the surface so far. We’re committed to building the scene from the ground up and supporting more events over time. Though the esports scene for Legends is still young, we’ve seen long-time players like Santosvella, TurquoiseLink, and Dust103 transition from content creation to great tournament placements, and have seen standout performers emerge such as EndoZoa, Karakondzhul, and Traitor-Joe.

Also, after our upcoming developer switch to Sparkypants, we’ll have a client we can easily add new features to. One of the highest priority items on that list is an in-game tournament mode which will help us support the tournament scene at all levels, from the most prestigious events like the Masters Series to smaller events that players and streamers can set up for the community.

GamesBeat: You haven’t been a Legends community manager for long. How does your role fit into esports, and how well do you know your role enough to help promote the new series?

Van Hoose: Having only worked here at Bethesda for about four and a half months, I am relatively new, but my experience in Legends dates back to July 2016. I picked up the game myself in late Closed Beta and quickly became a consistently high-ranked player and full-time content creator on Twitch and YouTube. I’ve always had a passion for competition in any of my hobbies, and Legends was no exception. Now that I’m at Bethesda I’ve used that passion and my knowledge of the community to work closely with our partners to make tournaments a success. It’s a rewarding challenge and a new experience from preparing as a competitor. Besides promotion, I helped develop the format and secure talent for the Masters Series and have worked with ESL to make sure the needs of competitive players are met and the viewers are given a fantastic show. I’ll even be on the desk myself for the conclusion of the season at QuakeCon!

GamesBeat: How do the recent nerfs play into the tournament meta?

Van Hoose: That remains to be seen! We timed the recent balance patch to fall after the last qualifier for the Masters Series, but with two weeks of prep time for the qualified players to work on their lineups. I’ve seen a lot of conversation surrounding how they’ll affect the main event, and a lot of conflicting opinions from qualified players. I think seeing who out of this extraordinary group of players can best solve the first few weeks of the post-balance patch metagame is the thing I’m most excited about.

GamesBeat: Are nerfs more about the constructed meta or the tournament meta?

Van Hoose: Honestly, I would say it was a little of both. However, many thousands more players regularly play the in-game Ranked ladder than play in tournaments, so their experience on that ladder is very important. Matches are only one game in the ladder, and playing against the same decks over and over can get repetitive quickly. In the Masters Series qualifiers, I think we wound up with a really diverse spread of decks coming out on top in the qualified players’ lineups, with Aggro, Midrange, Combo, and Control in a variety of classes all finding success.

Despite the variety, the changes were also meant to address potential stagnation. There were a couple cards that had simply been a little too good for too long (I’m looking at you, Drain Vitality) and a few newer cards that have been consistently dominating the meta since their release such as Haunted Manor and Tel Vos Magister. We also saw a ton of Mudcrab Merchant in the qualifiers, and it was universally decided that we weren’t comfortable with an RNG-heavy card being that much of a factor in competitive play. Basically, I think we had a healthy meta before, but I’ve been enjoying the breath of fresh air a little bit of tweaking can bring. 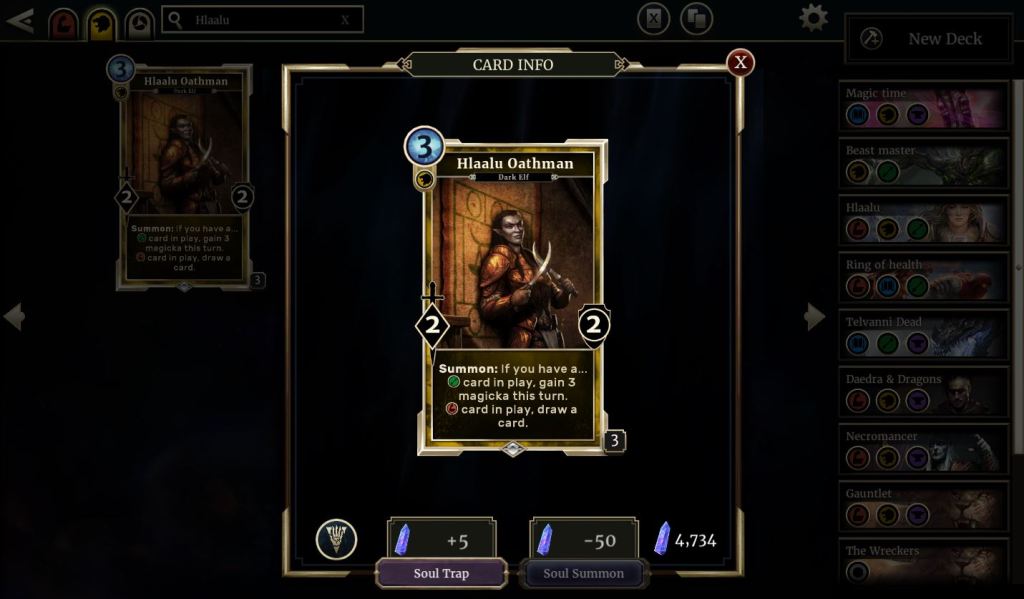 Above: The basis of decks so many love to hate … or hate to love.

GamesBeat: What are the strongest tournament decks so far?

Van Hoose: In the qualifiers, we saw a lot of Shout/Uprising Scout and Telvanni variants. A lot of people are saying that Strength-based Aggro decks like Warrior and Hlaalu will be the way to go for QuakeCon, but Nix-Ox Combo Telvanni looks almost as strong as ever and Tribunal Control didn’t really get hit by the balance patch. I think those are some of the strongest decks at each end of the spectrum, but it will likely come down to metagaming and countering the popular decks — something like Santosvella’s Midrange Monk could be a dark horse.

GamesBeat: How did Bethesda arrive at the prize structure? Is it coming from Bethesda, sponsors, or a mix of both?

Van Hoose: The Masters Series is funded entirely by Bethesda. We’ve also invested heavily in production value, as we believe giving the player base a fantastic show is of peak importance.

GamesBeat: How hard is it for Legends to get attention when Hearthstone has such an established presence in esports?

Van Hoose: There are quite a few card games with established competitive scenes, and quite a few without. With so many options for CCG enthusiasts, we’re not as focused with 1-on-1 comparisons as much as making sure Legends is a great experience for players and viewers. For competitive initiatives like the Masters Series, that means growing them with the help of community feedback and seeing what is well-received. It also means working toward a client which we can iterate on quickly and add new features to. Legends already has a lot of unique offerings like puzzle sets and, in my opinion, unparalleled strategic depth, but in the future we’re hoping features like in-game tournaments set us apart even more.

GamesBeat: How does Bethesda view Magic: The Gathering — Arena and its effects on card-game esports once it launches out of beta?

Van Hoose: Magic is the well-established card game and one that we have a lot of respect for, but again, those of us working on Legends are focused on what makes Legends great. We will be working to improve and grow our esports initiatives regardless of which other card games do or don’t support esports in any capacity. At the end of the day, I believe that people who like Legends will play and watch Legends, and those who like a different game more will play and watch that game; therefore, our job is to make Legends an accessible game with a lot of depth, content, and varied game modes that can appeal to all player types.

GamesBeat: Legends hasn’t had an expansion since mid-March, and the client is getting an update at some point soon. But is the lack of an upcoming, unannounced expansion hurting growth at this point?

Van Hoose: Players are definitely hungry for any new content we can give them, and I totally understand the sentiment. While the recent balance patch has helped somewhat in making the metagame feel fresh, nothing can truly compare to the novelty of a whole new expansion. To that end, we’ll be working with Sparkypants moving forward to provide faster updates on a more regular cadence. I have all the faith in Sparkypants’ design team, including MTG Hall of Famer and long-time Legends designer Josh Utter-Leyton, to deliver expansions of the high quality players have come to expect from us.

As for new content, I can’t say too much at the moment … but I would make sure to tune into QuakeCon. We might have some surprises in store!