When we talk about the geography of esports, many names spring to our mind: big supporting countries like South Korea, USA, Sweden and competitive titles with big international recognition like Counter-Strike: Go, Dota 2, and League of Legends.

With increasing revenues, exciting new games, and institutions starting to adopt pro gaming in scholarships and courses, it’s clear that this industry is here to stay — which is why it’s becoming increasingly important for the Middle East to start adapting.

According to Statista, shared revenue of the video gaming industry in the Middle East was evaluated at around $3 billion in 2017, with the biggest markets including Turkey, Saudi Arabia, and the United Arab Emirates. As this region is still considered a young market, it’s easy to see that there’s a lot of potential to a region-wide adoption of the idea of esports. 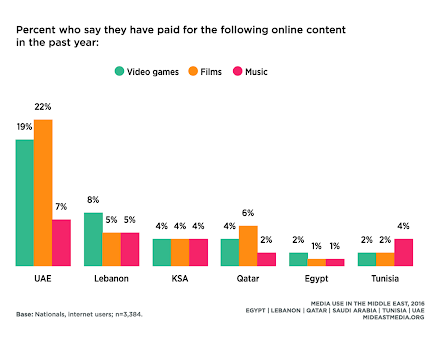 Above: Paying for content in the Middle East, from MidEastMedia.org

Saeed Sharaf, the CEO of eSports Middle East adds, “The Middle East is one of the youngest regions in the world age-wise, as people of ages 15-29 make up to 25 percent of the population. However, diversion of wealth and different social structures have split the region into two: First is the Levant and North Africa area, where players mostly play on low to mid-range PCs, and the second is Gulf countries where it’s more popular to play on consoles which splits the type of competitions to some extent.”

It is true that this classification of PC and console players is a real thing. The big difference that exists is that competitive console gaming only has a few big events whereas PC gaming has a lot of major events happening throughout the year.

Adapting to the entertainment of the future

Governments often receive a lot of flack when it comes to answering the demands of young people. However, things are looking bright when it comes to esports. Saudi Arabia now has official governmental representation and support for competitive gaming, and other Middle Eastern countries are following with acceptance of this oft-misunderstood form of competition.

“On the government part, many countries are starting to recognize esports officially through independent associations in Egypt, Tunisia, UAE, and Saudi Arabia, helping media to spread this new culture among new audiences.” Sharaf continues. “Eighty million estimated players share the same language and general culture, making the region one of the largest and most important in the world.”

Many hurdles and obstacles stand in the way of wide adoption of the idea of esports in the region. The biggest of which might be that gaming itself is still looked down on as a worthless time waster and a luxury in many of the Arab countries, often not taken seriously nor given much attention.

“The most obvious challenge in the face of esports’ spread is the obscure idea the general public has around video games in general. Where most people would classify them as kids-oriented entertainment and nothing more, despite the fact that most pro players are 18-plus years old and have similar mindsets to professional chess champions or any other athletes with their mentality,” says Hossam Al-Salti, board member of recently formed Syrian eSports Association.

Not only that, but the lack of financial safety is also a major concern to pro players in the region. So the responsibility of supporting a healthy scene lies in the hands of willing organizations as well. For example, there are an increasing number of professional teams joining the scene and some big tournaments happening, helping stability.

“It may not be easy to overcome these obstacles — and many others — as quickly as we’d hope, but the future is well-worth the wait. It’s a long marathon we have to take part in to introduce this new industry to the public, and thanks to encouraging signs by officials and more pro teams forming, we can see it coming together nicely,” continues Al-Salti.

Efforts will certainly not go to waste, as the huge potential for major tournaments in the region is something we caught a glimpse of at the recent WCA MENA (Middle East & North Africa) qualifiers held by ESME late last year. Players from different Arab countries had a platform to finally show off their skills in a big event. It’s a promising market according to many analysts, and the potential tourism benefits should make governments very interested as with UAE’s recent plans to become the capital of international esports starting with a huge stadium fully dedicated to pro gaming events.

“Alisport’s WESG competition has seen explosive growth in participants in MENA over the last two years. The grassroots scene is especially strong, and it’s a region we want to continue investing in this year,” said Jason Fung, the global esports director for World Electronic Sports Games (WESG).

Not just financially, even the players of this region are no slouches either. In fact, two of the best players in the history of Dota 2 and TI7 champions — Team Liquid’s “Miracle” and “GH” — come from Arab backgrounds. They spent countless hours in internet cafes honing their skills and competing with their friends locally only to become so good that international teams couldn’t help but notice just how well they played. Had they received better support in their own region, we might be looking at a Middle Eastern superteam. There’s a lot of hidden talent that’s yet to be discovered, and with the right encouragement, they will find their time to shine brightly.

Where the Middle East is headed in esports

Esports is slowly but surely moving toward becoming an Olympic activity, and in order to do so the Olympic committee requires it to be more organized under one official association with clear rules, rights and duties practiced by organizations, players and publishing companies as well as other parties. Esports are now watched by tens of millions as evident in League of Legends championship having 60 million viewers.

“MENA is a prospective market for esports, especially when we are talking about the Middle East. According to different research data, it is worth $1 billion-1.5 billion now, and it might grow up to $5 billion in the next 5 years. Nevertheless, the volumes are still very low compared to other regions. Nowadays, the esports is focused on monetization, and it is looking for a unicorn that will introduce the new ways of monetizing teams, players, sponsorships, media rights, etc. This will definitely enforce the growth of the esports in all regions, including MENA,” said Vlad Panchenko, the CEO and founder of DMarket.

We can only hope to see more constructive steps taken to build a fruitful future for esports in the region. I look forward to hearing about more governmental efforts transforming this dream into a reality that we can proudly witness.

Aurangzeb A. Durrani is a former professional gamer and an esports analyst. His interests include esports, online gaming, tech businesses, and blockchain.