Virtual reality (VR) has a great deal of potential for the betterment of society – whether it be inspiring social change or training surgeons for delicate medical procedures.

But as with all new technologies, we should also be aware of any potential ethical concerns that could emerge as social problems further down the line. Here I list just a few issues that should undoubtedly be considered before we forge ahead in optimism.

When we think of virtual reality, we automatically conjure images of clunky headsets covering the eyes — and often the ears — of users in order to create a fully immersive experience. There are also VR gloves and a growing range of other accessories and attachments. Though the resultant feel might be hyper-realistic, we should also be concerned for people using these in the home — especially alone. Having limited access to sense data leaves users vulnerable to accidents, home invasions, and any other misfortunes that can come of being totally distracted.

There’s a lot of debate around whether VR is socially isolating. On the one hand, the whole experience takes place within a single user’s field-of-vision, excluding others from physically participating alongside them. On the other hand, developers like Facebook have been busy inventing communal meeting places like Spaces, which help VR users meet and interact in a virtual social environment. Though, as argued, the latter could be helpfully utilized by the introverted and lonely (such as seniors), there’s also a danger that it could become the lazy and dismissive way of dealing with these issues.

There is also the question of whether forums like Spaces may even end-up “detaching” users by leading them to neglect their real-world social connections. Studies have already demonstrated that our existing social media consumption is making many of us feel socially isolated, as well as guilty and depressed. There’s also plenty of evidence to show that real face-to-face interactions are a crucial factor in maintaining good mental health. Substituting them with VR without further study would be ill-advised. 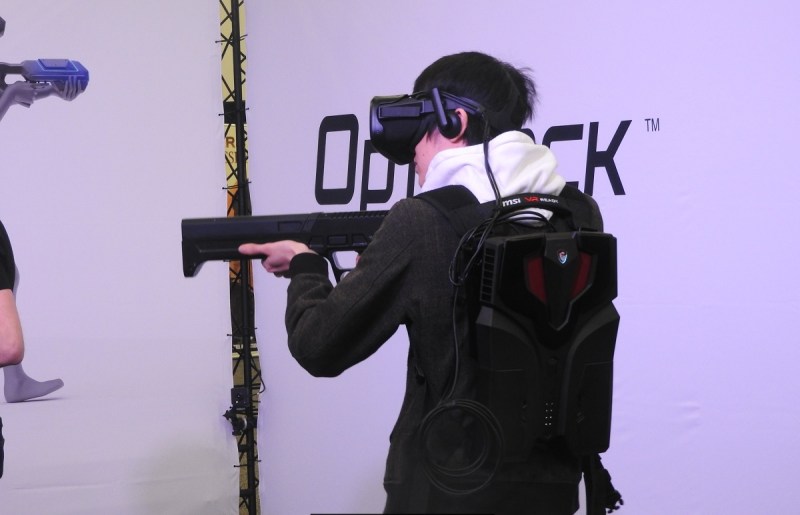 Above: OptiTrack claims to bring realism to VR shooting.

It is well-acknowledged that being thoroughly and regularly immersed in a virtual reality environment can lead some users to become desensitized in the real-world. Indeed, VR is already employed to as a tool to desensitize and emotionally harden individuals against phobias, and even military combat. However, outside of this supervised use, desensitization could become a danger, leaving users unaffected (or less affected) by — for example — the acts of violence found in some VR gameplay.

Last year, academic researchers in the U.S. released the results of a longitudinal study which found that repeatedly playing violent video games led to decreased emotional sensitivity and a lessened capacity for guilt among participants. Due to higher levels of immersion, we have some reason to suspect that these effects could be even more potent with virtual reality.

Akin to desensitization, is the problem of users overestimating their ability to perform virtual feats just as well in the real-world. This is especially applicable to children and young people who could take it that their expertise in tightrope walking, parkour, or car driving will transfer seamlessly over to nonvirtual environments.

Indeed, a recent study from Stanford University evidenced how children often fail to distinguish between their feats in real-life and in VR — from treating their avatars as though they are their real bodies, to watching their virtual reality doppelgangers swimming with orcas and then recalling it as a real-life memory.

There could also be more profound and dangerous psychological effects on some users (although clearly there are currently a lot of unknowns). Experts in neuroscience and the human mind have spoken of “depersonalization”, which can result in a user believing their own physical body is an avatar. There is also a pertinent worry that VR might be swift to expose psychiatric vulnerabilities in some users, and spark psychotic episodes. One investor has even warned that virtual reality gaming could cause real-life post-traumatic stress disorder.

Needless to say, we must identify the psychological risks and symptoms ahead of market saturation, if that is an inevitability.

Philosopher Thomas Metzinger is one of a growing number that have expressed concern that VR headsets could be employed by the military as a kind of “ethical” alternative to regular interrogatory torture. Whether this is truth or speculation, it nevertheless establishes a critical need to understand the status of pain, damage, violence, and trauma inflicted by other users in a virtual environment — be it physical or psychological.

At what point does virtual behavior constitute a real-world criminal act?

Attempts at consumer manipulation via advertising trickery are not new, but up until now they’ve been 2-dimensional. As such, they’ve had to work hard compete with our distracted focus. Phones ringing, babies crying, traffic, conversations, music, noisy neighbors, interesting reads, and all the rest. With VR, commercial advertisers will have access to our entire surrounding environment (which some psychologists argue has the power to control our behavior). This will ramp up revenue opportunities for developers, who now have (literally) whole new worlds of blank space upon which they can sell advertising.

Commentators are already warning that this could lead to new, covert tactics involving product placement, brand integration and subliminal advertising.

One of the most exciting selling points of VR is that it can let us roam the earth from the comfort of our own homes. This is obviously a laudable, liberating experience for those who are unable to travel. However, as with augmented reality, we probably need to have conversations about where it is appropriate to roam and/or re-create as a virtual experience. Is it fine for me to wander through a re-creation of my favorite celebrity’s apartment (I can imagine many fans would adore the idea!)? Or peep through windows of homes and businesses in any given city street? The answers to some of these questions may seem obvious to us, but we cannot assume that the ethical parameters of this capability are clear to all who may use or develop.

Last, but not least, the more we “merge” into a virtual world, the more of ourselves we are likely to give away. This might mean more and greater privacy worries. German researchers have raised the concern that if our online avatars mirror our real-world movements and gestures, these “motor intentions” and the “kinetic fingerprints” of our unique movement signatures can be tracked, read, and exploited by predatory entities. Again, it’s clear that there needs to be an open and consultative dialogue with regards to what is collectable, and what should be off-limits in terms of our virtual activities.

This list is not exhaustive, and some of these concerns will be proven groundless in good time. Regardless, as non-technicians and future users, we are right to demand full and clear explanations as to how these tripwires will be averted or mitigated by VR companies.

Fiona J. McEvoy is a tech ethics researcher and founder of YouTheData.com.