The developer is one of many that is making a huge amount of cash by selling virtual goods in its online PC games.

Riot generated $624 million in revenue in 2013 on the back of its multiplayer online battle-arena title League of Legends, according to industry-intelligence company SuperData. While that was huge for the free-to-play game, it was a distant second to Korean first-person shooter CrossFire from developer SmileGate. CrossFire, which is extraordinarily popular in several Asian markets, earned $957 million.

While League of Legends and CrossFire duke it out for first place, the real winner is Chinese investment-holding firm Tencent, which is the publisher of CrossFire and owner of Riot Games.

Here’s the full top 10 from SuperData, which illustrates the games that brought in the most money through microtransactions: 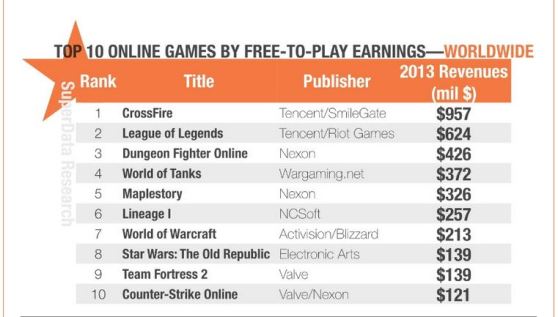 Above: The top 10 online games in terms of microtransactions.

Interestingly, Star Wars: The Old Republic and Team Fortress 2 both brought in $139 million in microtransactions.

Publisher Electronic Arts released Star Wars: The Old Republic in 2011 as a subscription-based MMO. It has since switched to a hybrid free-to-play model. The game was also notoriously expensive for developer BioWare to create, yet it isn’t performing that much better than Valve’s 2007 FPS Team Fortress 2, which it made free-to-play in 2011.

Of course, The Old Republic does still have gamers paying a monthly subscription fee, so the comparison isn’t exactly on equal footing.

Both games are behind World of Warcraft, which isn’t even free-to-play, but managed to bring in $213 million in microtransaction sales in 2013. That’s money on top of the more than 7.6 million monthly subscriptions the games produces.