A typical summer blockbuster is something like Finding Dory: a movie that makes hundreds of millions of dollars by bringing people into the theater. But mobile gaming may have introduced a new kind of summer hit.

Pokémon Go is one of the biggest releases of any kind this summer. The GPS-powered location-based monster-seeking game launched to immediate excitement, and it’s easy to stumble across groups wandering around playing it in many big cities. This has made it one of the top releases in the $36.9 billion mobile gaming market — and the fastest U.S. app ever to reach No. 1 on the iOS and Android grossing charts.

But it’s difficult to understand exactly how popular it is. To help you grasp Pokémon Go’s enormous reach, we’ve gathered up 10 ways the game is one of the biggest blockbusters of summer 2016.

Pokémon Go has 15 million official downloads in the United States

Using tracking data from intelligence firm Sensor Tower, it looks like Pokémon Go already has 15 million download sin the U.S. alone. That number should continue to grow as the phenomenon attracts more and more people around the country. Keep in mind that is only the in the U.S. and doesn’t include New Zealand, Australia, or Germany, which are the only other territories that have the app.

More than 10 percent of Android devices in the U.S. installed the app

One in every 10 Android devices in the United States already has the game, according to data-tracking firm SimilarWeb. That’s already more than Candy Crush Soda Saga, which is on 5 percent of U.S. Android devices.

4 million people visited apkmirror.com to get the unofficial Android version on July 6 alone

Pokémon Go is only out in the U.S. and three other territories. But that hasn’t stopped folks in other countries from tracking down ways to install the game outside of the official Google Play store. As I wrote last week, you can download Go right now for Android and start playing it by getting the APK executable file from the host site apkmirror.com.

It turns out that a lot of people thought that was a good idea. 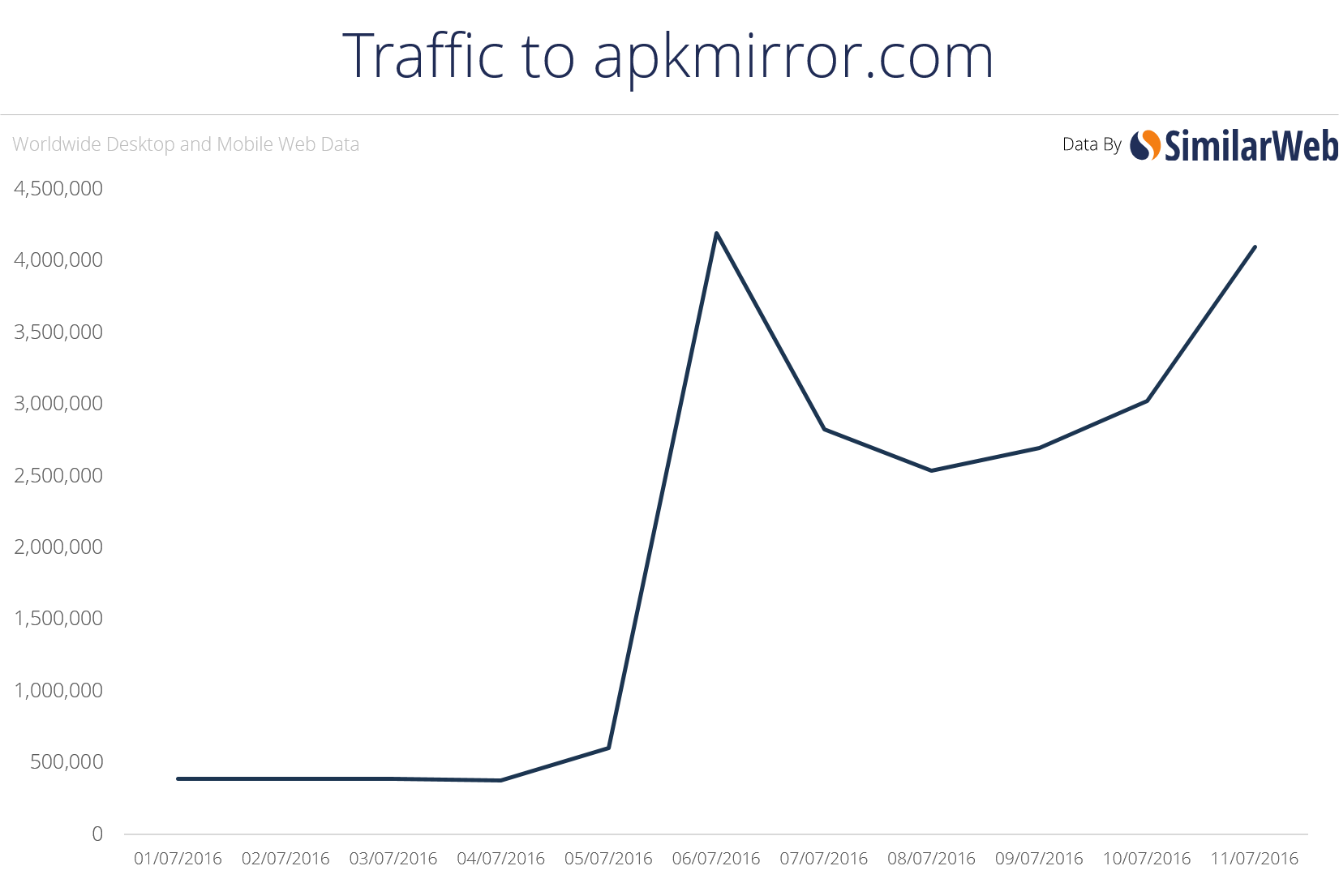 Above: Pokémon Go gave the site a big boost.

The website typically gets around 12 millions visitors per month. It has more than that in the days from July 6 through July 11 alone, according to SimilarWeb. That’s an enormous influx of traffic, and Niantic’s game fueled the majority of that.

6.3 percent of Canadian Android devices have Pokémon Go installed — and it’s not out in Canada yet

So many people are starving for Pokémon Go action that the game is already on 6.8 percent of Canadian Android devices. Niantic still has not launched it on the Google Play or iOS App Store markets in that country yet. SimilarWeb has found similar levels of installations throughout the world.

For example, here’s Europe (before the game went live in Germany): 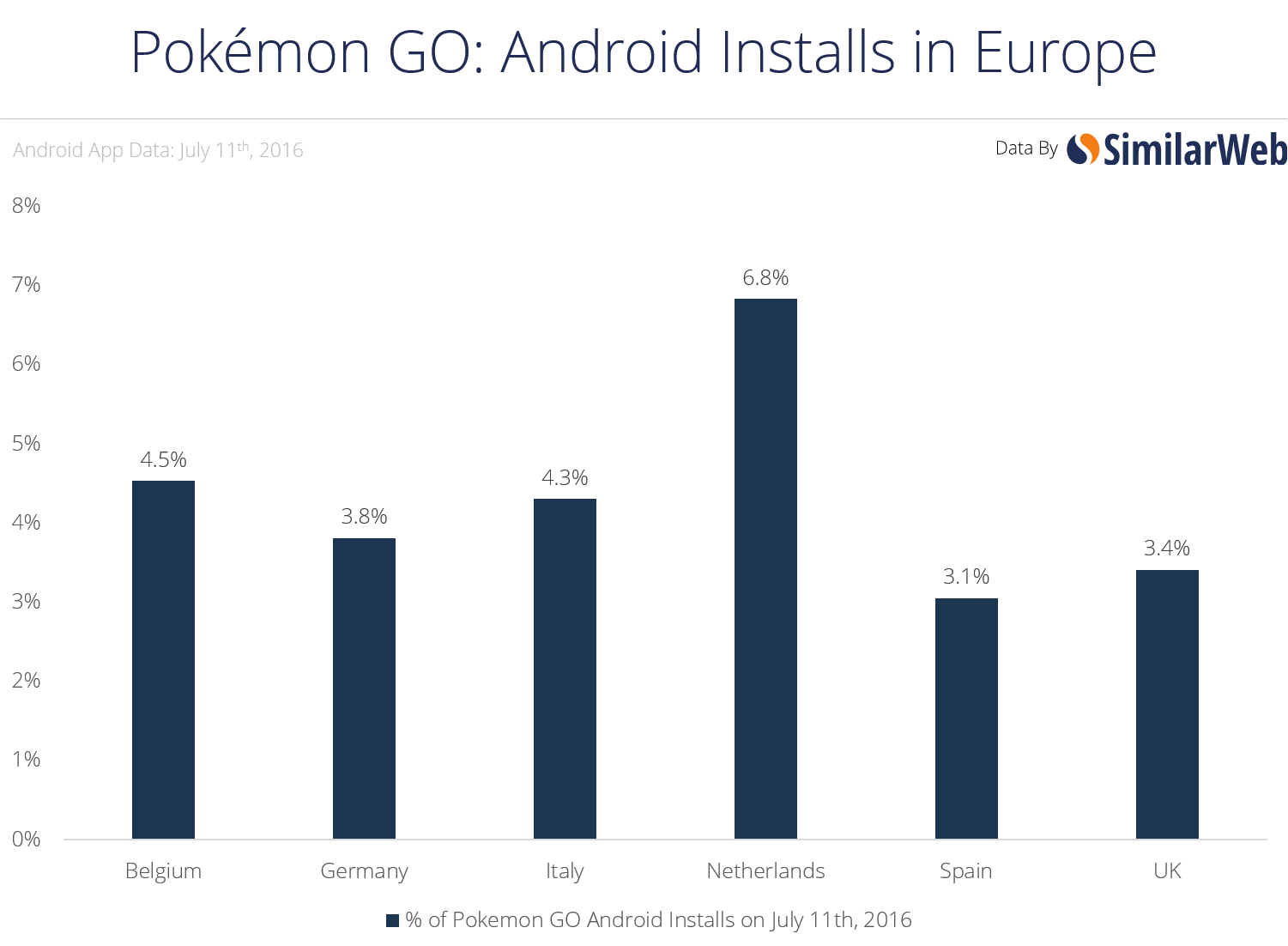 Above: The Dutch love catching them all.

A recent New York Times report claims that Niantic is going to start selling ads and sponsored locations in Pokémon Go, and one of the reasons that could generate a ton of income for the company is its mega-high levels of engagement. In the U.S., iOS users spend an average of 33 minutes and 25 seconds on Pokémon Go. That’s more than any of the biggest social networks, according to Sensor Tower. 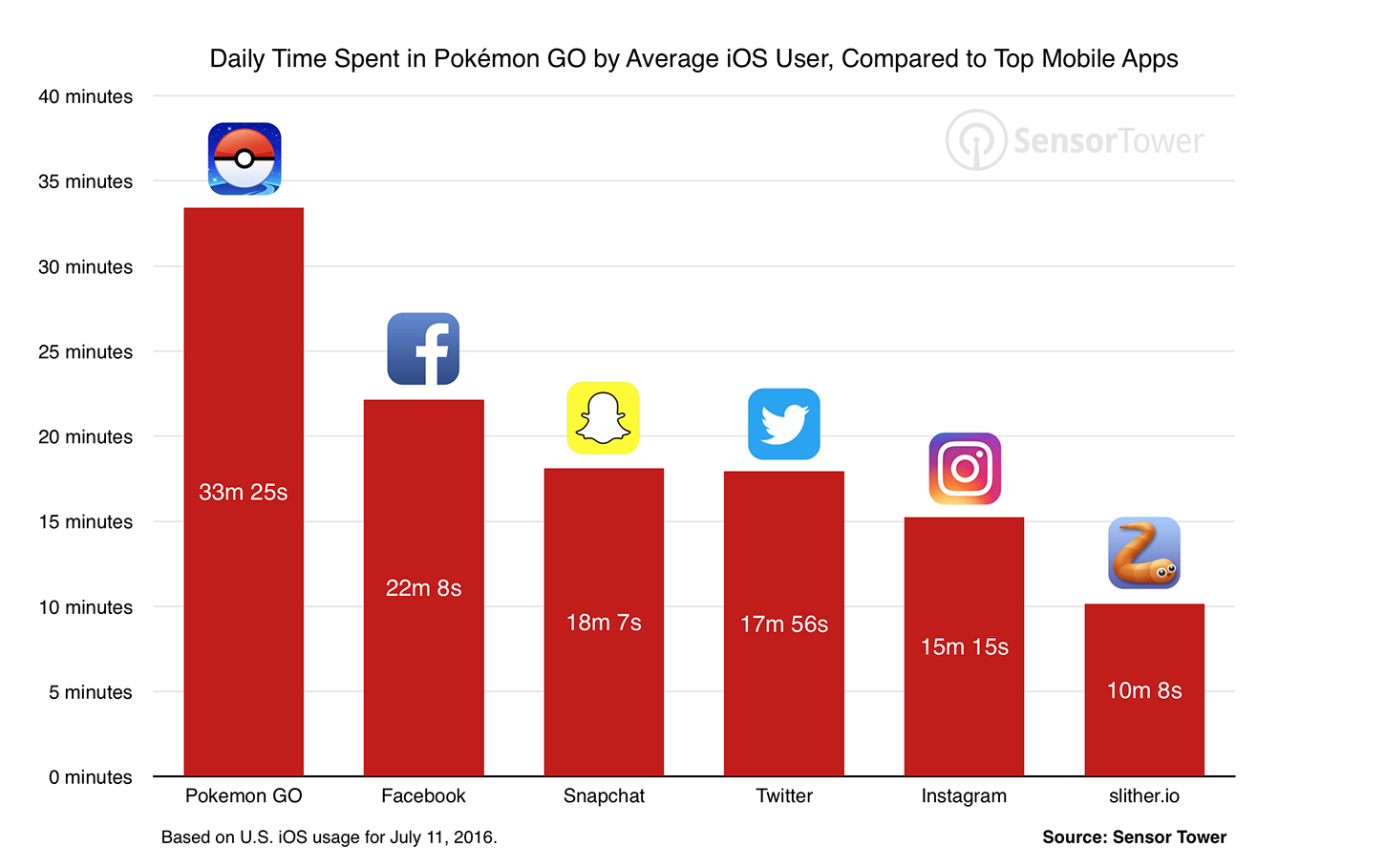 Above: I’d rather catch my 50th Rattata than see what my old, racist high-school friends are up to!

Pokémon Go is making $1.6 million every day from iOS users in the U.S. alone

In addition to the engagement, Sensor Tower found that Go is consistently making $1.6 million every day from iOS players in the U.S. If you add in Android and the rest of the world … well, Niantic should have enough money to afford a new server or two soon.

Two-thirds of Americans have heard about Pokémon Go

Brands and celebrities can’t stop tweeting about it

You know something is a phenomenon when big brands and celebrities try to capitalize on it. Mario Lopez, Stephen Colbert, and Wiz Khalifa have all taken to social media to talk about it. But the craziest person to tweet about the game is the hyper-macho Vince McMahon, who is the chief executive officer of World Wrestling Entertainment:

I don’t care who you are … Get OUT of my weight room! #PokemonGO pic.twitter.com/JLaB71nSKV

But while celebrities are mostly having fun with it, it is leading to a big boost for the bottom line of some stores by using it as a promotional tool. L’inizio Pizza Bar in New York City spent some money in the game to buy some items that attract the digital monsters, and that has brought in users. CNBC reports that the restaurant saw a 75 percent increase in sales from people coming in to eat, drink, and catch monsters.

Finally, Pokémon Go may help out Nintendo by getting more people to play its games. In Fluent’s survey, it asked the people who are playing the game if they will consider other Nintendo games in the future based on their experience with it, and 62 percent said yes. That was one of the reasons Nintendo is getting into mobile, and now it has some early evidence that this might pay off.

While The Pokémon Company and Niantic are responsible for Go, Nintendo owns a minority stake in The Pokémon Company, and it invested in Niantic. Additionally, many consumers associate Pokémon with Nintendo, and the game’s positive reception should rub off on it in the long run.